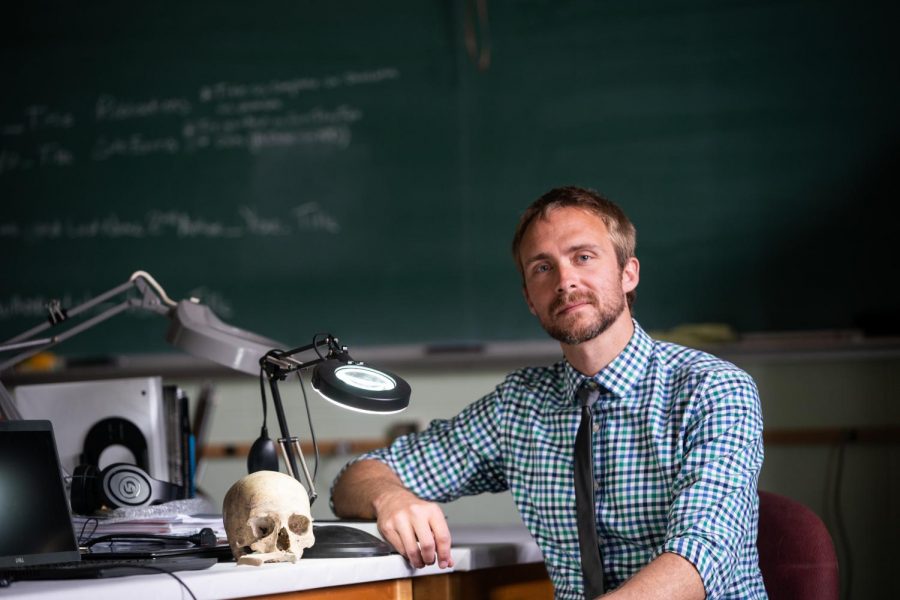 Anthropology students at UW Oshkosh, along with their professor and the Winnebago County Sheriff’s Office, are hoping to unearth the remnants of a missing man who was presumed murdered on August 13, 1983, in the upcoming spring interim.

“We may or may not find Starkie Swenson,” UWO Associate Professor of anthropology Jordan Karsten said.“The work that we’re going to do is to try to bring this case to complete closure to finding Starkie Swenson, and that’s for his friends and family. That’s undoubtedly the most important thing that we could do.”

Starkie Swenson, a 67 year old man from Neenah, WI, disappeared in 1983 after he rode away from his house on a bicycle and was last seen near Shattuck Middle School in Neenah. For years, the case stayed dormant, but there were breaks in the case.

Swenson’s lover’s ex-husband, John Andrews, pleaded guilty to “negligent use of a motor vehicle” in 1994, according to prosecutors. Swenson and Andrews were in a love triangle with Claire Andrews, and it was believed Andrews ran over Swenson.

“It’s an incredibly complex case in terms of the background of it and what happened,” Karsten said. “It’s an interesting case certainly, in addition to the fact that we’re attempting to find this body has never been found even though someone has been prosecuted for the murder.”

This trial was prosecuted without a body, which is pretty rare. Andrews ended up taking a plea deal, called an Alford plea, and that allowed him to reduce his sentence to 24 months.

Karsten has worked many cases over the years since he was hired here in the fall of 2014. There have been many cases for different law enforcement agencies that he has helped out all around the state. Sometimes he will take students with him to help out in certain cases; this is one of those cases.

“We’ve done cases in the past, even in the last month or two, where we’ve gone and surveyed looking for a missing person; we were able to locate some of their skeletal remains.” Karsten said. “Then, using unique aspects of their anatomy from their medical record, we actually identify them.”

Karsten does not think of himself as a forensic anthropologist, but rather an archeologist.

“Most of my research focuses on ancient human bones, but to get to those and to study them to learn about humanity’s deep past, we have to find them and excavate them,” Karsten said. “Those skills are useful at crime scenes, in terms of trying to do a survey to look for burials, excavate them to make sure you record all the information that’s there, their location, and then make sure you don’t leave anything behind.”

These are the same methods he would use in an archeology site, which also happens to be really useful at some crime scenes and to law enforcement.

The most common case that comes up is when somebody turns into law enforcement a bone and if it is not a skull, most people do not know if it is animal or human.

“[Law enforcement then looks] for a resource, and at universities, that tends to be where people look,” Karsten said. “I basically got started working with law enforcement in Wisconsin helping them recognize when their cases have animal bones or when they have human bones and then it’s kind of grown from there.”

In the last week, Karsten has helped three different jurisdictions in Wisconsin identify bones if they are human or animal. In every case, they were animal. It is much more rare for him to go out and actually do a search, but he does a few of those a year.

For the spring interim class, Karsten had to give consent for students to join the class. The class entails doing survey, chest excavations and working with ground-penetrating radar.

Karsten likes classes that are focused on hands-on work.

“Lecture classes are really important, but I think whenever you can get people to start to put into practice the things that they’ve learned in other classes, it’s a good way for people to learn.” Karsten said. “The students and I can contribute to our own community of Winnebago County, Oshkosh, in a way that is helpful.”

If anyone is interested in the case and true crime happening locally, Karsten and a friend who has assisted him in archaeological cases, Matt Hiskes, have put together a podcast on the case called “Cold Case: Frozen Tundra,” available on most platforms.

Over the course of many episodes, they go over the background of this case in terms of what happened with the disappearance, what the initial investigation was like, the initial breaks in the case, and the trial.

“In the podcast, we’re going to get into the science of what we can do to help in terms of this search for Starkie Swenson,” Karsten said. “The coolest part, I think, is that my students and I will give updates from the field in terms of the work that we’re doing.”

To listen to the podcast and to follow along with the excavation, go to www.frozentundrapodcast.com.