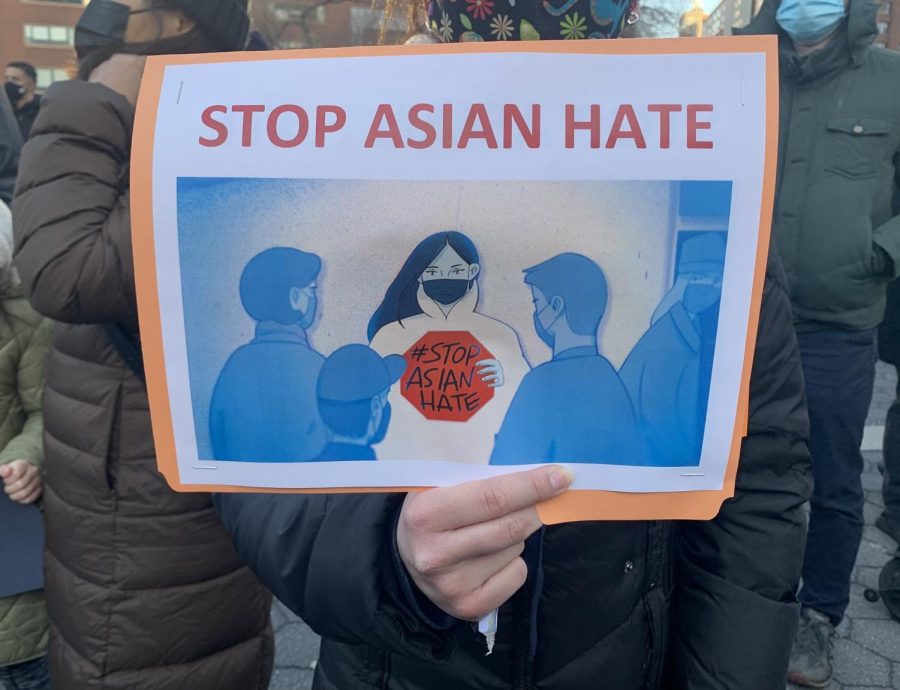 Asian American racism, according to the Washington Post, has been around for over 160 years, following the immigration of Chinese men in the 1850s working in mines and on railroad construction, but it has been shadowed for far too long. Only with recent attacks on Asians during the pandemic, including the Atlanta murders, has greater awareness been brought to the longstanding issues.

Once Chinese immigrants came in filling low-wage, dangerous jobs in the U.S., the racist trope of “Asians coming to steal white jobs” started.

In 1854, the case People v. Hall ruled that “people of Asian descent could not testify against a White person in court, virtually guaranteeing that Whites could escape punishment for anti-Asian violence.”

Countless other cases, massacres, acts, murders, riots and other forms of hatred have been targeted toward Asians. The pandemic has only heightened acts of hatred.

“The events that have been happening in America are horrible,” UW Oshkosh sophomore Olivia Ozbaki said. “The intentional targeting of Asian Americans horrifies me. I’ve always held fear of being attacked because I was different, but I didn’t think there would come a time where I needed to legitimately fear losing my life for it.”

Ozbaki is Southern Chinese and shared that her most prominent experiences of racism were from her childhood and adolescence through forms of overt prejudice and microaggressions.

Often, White Americans tend to dichotomize racial issues in Black and White terms, which leaves Asians and non-black people of color to have their experiences ignored.

“When I was younger, people tended to discriminate against me more physically rather than psychologically,” Ozbaki said. “I would be taunted for my dark tan skin color, the shape of my eyes, etc.”

She would be called derogatory terms such as “monkey,” “chink” and “Ching Chong.”

“I have been blessed to have experienced minimal racist incidents at Oshkosh, however that doesn’t mean they didn’t happen,” Ozbaki said. “I actively work to avoid places and situations to keep myself from possibly experiencing a negative bias.”

At Oshkosh, she has dealt primarily with microaggressions or indirect encounters from people in classes and friends, surprisingly.

She has heard things such as, “Oh, you’re Asian so you MUST be really good at math” or statements such as “Don’t all asians do or like x, y, z?”

The article states that when Asians are stereotyped academically that they are smart, especially in math and science, it may actually depress academic performance.

Even though it might be meant in a positive manner, one cannot assume another’s academic capabilities. This stereotype is a common belief of many white people.

Shantha Rau Barriga, the deputy executive director of Human Rights Watch, states that during former President Donald Trump’s presidency, his “reckless rhetoric over the past four years has created a safe space for people to voice their anger and hatred against minorities, normalizing bigotry.”

President Joe Biden was quick to condemn the “skyrocketing” of hate crimes against people of Asian descent since the start of the pandemic over a year ago, and so
was UWO.

Chancellor Andrew Leavitt released a statement to the university community after the murder of eight people, six identified as Asian, in Atlanta, Georgia on March 16.

“I reaffirm what I shared a year ago this week as the onset of pandemic fed racist stigmas and bias around the globe: bigotry has no place at UWO,” Leavitt said. “It threatens our safe campuses, jeopardizes our mental and emotional health and is destructive to the inclusive institution we are creating.”

Junior Vice President Raiden Montero of Club Nippon has dealt with racism here on campus both before and after COVID-19 hit the U.S.

He is Thai/Chinese-American on his mother’s side and vividly remembers an experience when COVID-19 was getting very serious in China before it hit the U.S.

This experience happened when he went to pick up his girlfriend, a foreign exchange student from Japan at the time, from the Appleton airport when she returned from Japan during winter break.

“I am a Japanese major, so naturally I spoke Japanese to her when I surprised her at the airport,” Montero said. “We were both conversing happily until I noticed that people were giving us very dirty looks once they saw two Asians speaking an Asian language they didn’t understand. That was when I really felt unwelcome here in Wisconsin.”

His girlfriend’s country is ethnically homogeneous, and she had never really dealt with racism prior to this incident. In March of 2020, a week before everyone was sent home, people were very “paranoid and xenophobic.”

“My head was always on a swivel whenever my girlfriend and I walked anywhere outside, fearing that someone would try to harm her or myself,” Montero said. “She wouldn’t walk anywhere without me because of the fear of being assaulted.”

Montero, similarly to Ozbaki, has also been called racial slurs, but he said he has endured it.

“With the fellowship of my other Asian classmates and friends, especially my three best friends who are all of Hmong descent, I’ve been able to remain strong in my ethnic pride and have been advocating for all Asian students on campus during these trying times,” Montero said.

Even as Asian American racism is of certain relevancy, all forms of racism should be condemned.

The Asian Model Minority myth, according to the article, is a strong belief that Asians are somehow immune to the effects of racism.

NPR in the Wisconsin Public Radio, describes racial resentment as “moral feeling that Blacks violate such traditional American values as individualism and self reliance,” as defined by political scientists Donald Kinder and David Sears.

Ozbaki mentioned that Asians have been painted as a model minority in order to place Asian Americans against Black Americans, which is extremely harmful for both communities.

This story is made part by UWO students who took the time to share their experiences with discriminatory hate and violence. Oshkosh will not stand for discrimination and demands an inclusive community both on and off campus.