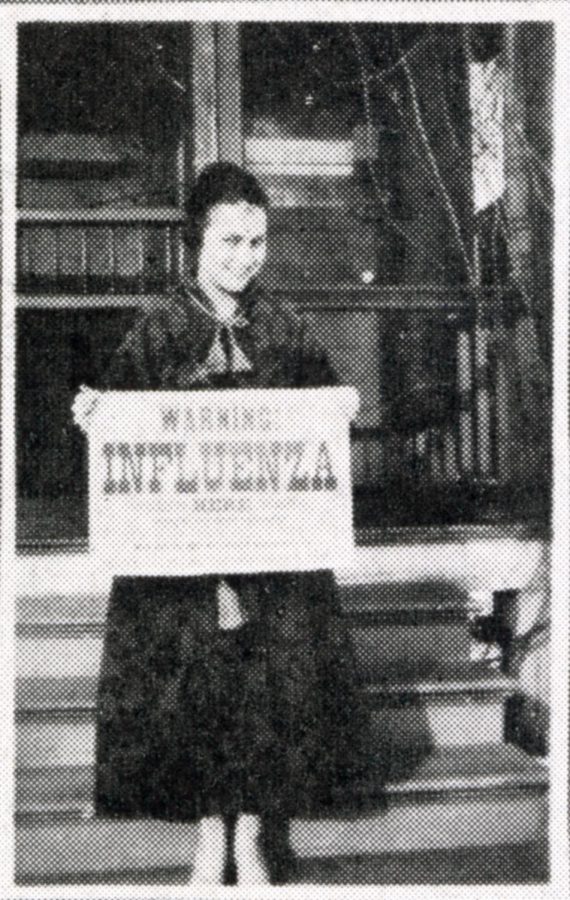 A female student holds a sign on the steps of her home in 1918, warning people not to enter because of influenza. (University Archives photo)

COVID-19 shut down the world in 2020, with UW Oshkosh sending its students home and closing its campuses on March 13. But the coronavirus pandemic wasn’t the first time the school had to shut down due to a virus.

In fall of 1918, Spanish influenza, or more commonly known as the flu, came to Oshkosh. According to UWO’s online archives, the flu pandemic charged across America in seven days and across the world in three months.

It is said that it claimed more lives than all major world wars combined. Estimates of deaths ranged from 20 million to 50 million, most in the 90 days between October and December 1918.

The flu became associated with high rates of morbidity, mortality, social disruption, and high economic costs. In fact, it was the most destructive pandemic ever known – until 2020.

The Centers for Disease Control and Prevention said the flu is one of the hardest viruses to predict due to the different strains and how they mutate, although the most common ones are influenza type A and B.

On Oct. 5, 1918, The Daily Northwestern reported: “Influenza has appeared here. City will fight to control it.”

Much like in 2020, there was a lot of misinformation on what was the best way to deal with the flu.

A newspaper headline stated: “Views of doctors on how to handle grip don’t agree. All say situation is serious. Some urge prompt closing and quarantines.” At that point, 103 cases had been reported.

According to University archives, when cases were reported, notes would be placed on the door of the home of the person who was sick. The notes read that no one was allowed to enter except nurses, doctors or clergymen.

The placard read: “Warning! Influenza here. This card must not be removed without authority. Milk dealers must not deliver milk in bottles.”

During the Spanish influenza, Oshkosh shut down most businesses on Oct. 12, but anything that was allowed open had a 5 p.m. curfew.

In a 1918 edition of The Normal Advance, it was reported: “Our organizations page is limited, but blame it on the Spanish Influenza. On account of the ban, no meetings could be held, and while the organizations have manifold plans for this year, they cannot realize them until the influenza ban has been lifted.”

Gauze masks were given out and were to be worn when going out, but people also tried to find different cures for the virus.

According to the archives, the remedies tried included Snake Oil, Laxative Bromo-Quinine, Smoko Tobaccoless Cigarettes, Vick’s Vapor Rub, Kondon’s Catarrhal Jelly, Horlick’s Malted Milk and many others. At the same time, pharmacists were filling prescriptions for heroine, morphine, cocaine and codeine to treat the flu, while whiskey and brandy were also promoted in combating the flu.

An article in the Oshkosh Daily Northwestern titled, “Spanish Influenza: What it is and How it Should be Treated,” was printed throughout the course of the epidemic.

It advised propl to “Go to bed and stay quiet, take a laxative, eat plenty of nourishing food. Keep up your strength, nature is the cure. Always call a doctor.”

Cases started to slow down and the ban was temporarily lifted, but when World War I ended, parades, parties and rallies were held and this contributed to the second wave of the flu.

By Nov. 14,  the number of cases rose significantly and Oshkosh Mayor McHenry issued orders to Police Chief Henry Dowling to enforce the “no spitting” ordinance because he believed this might be a contributing factor to the spread of flu in the community.

The Committee on Teachers of the School Board announced that schools would reopen Monday, Nov. 20, 1918. But much like in 2020, several parents wrote letters to the editor of The Daily Northwestern, expressing concerns about allowing their children to go to school with an epidemic still in progress. These concerns prompted the city ban to remain in place.

The influenza ban was finally lifted on Nov. 29 and schools reopened on Dec. 3. However, children with the sniffles or any other symptom were urged to stay home.

The first day that classes resumed, attendance stood at 75%. The library fumigated every returned book. The theaters ventilated their buildings between performances.

For more information about how you can protect yourself from COVID-19, go to https://www.cdc.gov/coronavirus/2019-ncov/whats-new-all.html. To learn how to get vaccinated, go to https://uwosh.edu/titans-return/vaccination.