Photos courtesy Dorian Boyland — Dorian Boyland played in 21 major league games with the Pirates before being traded to the San Francisco Giants during the 1981 season. 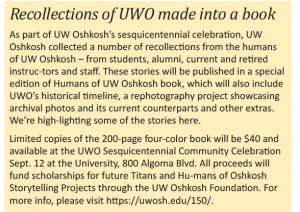 The first time I met Coach (Bob) White, I felt honestly loved and respected. He was at my high school in Chicago recruiting me to play basketball for Oshkosh. He offered to bring me and another player to Oshkosh to visit and stay at his home.

That’s when I got to meet Ma (Shirley White), their daughter Carol, who I consider my sister, and the dog Heidi. It was like leaving home and being with family again. I had other opportunities to go different places, but I felt a connection with him. I didn’t have a father figure in my life, and I thought he would fit that bill for me.

At my first official practice as a freshman, I had a knee injury. We were scrimmaging, and I was on a fast break. The person guarding me was going one way, and I was trying to do a cross-over and go left. The ball and my other side of the body went left, but my right knee didn’t. I was 17 and had to go to the hospital to have surgery. I wasn’t even old enough to go to the adult section so they put me in pediatrics.

While I was at the hospital, my mom stayed with the Whites at their home. They took care of her and brought her

back and forth from the hospital to see me. My mom flew me back to Chicago for a couple of day. Quite frankly, I’m not going to say I was depressed, but I was thinking, “I can’t play basketball, I can’t play baseball, how am I going to walk around in the snow?”

I told my mom that I wasn’t going to go back to school until next year. My mom immediately called Coach White, who told me, “Look, I don’t care if you don’t play another game. You need to get back to school and I promise you, you can stay up here as long as you want. Come back to school and graduate and make a life for yourself.’ Immediately the next day, my mom put me on the plane to Oshkosh, where Coach White picked me up, and I stayed at his house for two weeks. He has been that person in my life other than my mom. Oshkosh, taking Coach White and his family aside, was the best four years of my life. Whatever so far I’ve accomplished in my life, I owe it all to those four years at Oshkosh.”

In 2007, I was on a spiritual journey in India when I came across a man lying on the streets of Varanasi. He appeared very ill, and in retrospect was likely very close to the end of his life. People of Hindu faith consider Varanasi to be a sacred city and have traveled there to attain liberation from the cycle of death and rebirth for centuries. I felt pulled to care for this man, but I didn’t know how to do this safely, so I left him a promise that the next time I came back to India I would know what to do. When I returned home to Oshkosh, I took some time to consider how I would keep my word. I humbled myself and signed up for a CNA course to learn the basics of caregiving.

Then I applied for admission to the UWO College of Nursing program as a non-traditional student. Nursing school is inherently

challenging. Working as a yoga instructor and being present for my two school-age daughters made getting back in the classroom after 16 years a little complicated.

I remember one of my daughters trying to reconcile my new role as a student. During my first week of classes, she said to me, “All my life, dinner has been on the table at 5 p.m., and here it is 5 p.m. and no dinner.”

I earned my BSN in 2013 and celebrated with a return trip to India. In 2015, I earned an MSN with an emphasis in public health. I was passionate about my work as a hospice nurse and about caring for underserved populations in rural communities. I felt called to share this, and I started teaching in the UWO College of Nursing as an Instructional Academic Staff member in 2017. Each semester I teach Sophomore II students, brand new to the nursing pro-gram, in the simulation lab. I love teaching in this capacity because it’s a very safe place for our students to learn and to make mistakes.

I tell my students that I understand that they will make mistakes, and that’s OK, we’re going to work through simulation together. I don’t say, “That is wrong. This is right. Let’s move on.” They wouldn’t develop into critical thinkers if I used that approach.

When I reflect on my learning experiences as a student and nurse, I think about the gift we have working with our patients. You can read and learn from books and lectures, but it is the application of that knowledge that makes nursing come to life. Our patients are ultimately our greatest teachers.

By Walt Busalacchi
Class of 1972

While growing up, I viewed college as something other people did. My family didn’t do college. We worked. No one in my family had graduated from high school much less college. My dad was a floor sander and owned his own business. My mom was a housewife.

After high school, I spent three years in factories working as an assembler, machine operator, machine repairman, and I drove a truck for a while. I was dating my high school girlfriend, and we decided to get married. As the wedding date approached, I began to question, not the marriage, but working in a factory for the next 30, 40 years. So we postponed our wedding, and I went back to school.

I spent a year at MATC (Milwaukee Area Technical College) and transferred to Oshkosh as a sophomore. My girlfriend and I got married between my junior and senior year. We lived at 806 Scott Ave., paid $85 a month for a furnished apartment with utilities and another $5 for the garage. That was 1971.

One day while walking through Albee, I saw a sign for student assistants to supervise the gymnastics gym. The job was to make sure no one killed them-selves on the trampoline or other apparatus and to help some of the women gymnasts practice their routines by spotting them.

I was a high school gymnast and was on the team at MATC. I expressed interest in the position to Dick Schumacher, the assistant

director of intramural sports, who had played men’s basketball at Oshkosh State Teachers College from 1947-50.

He asked, “You a gymnast?” I told him my background, and he said, “OK, can you start Mon-day?” That was the exhaustive job interview and the beginning of a long-term friendship and relationship with Dick and his family that continues to this day.

When I was doing factory work, my intellectual curiosity was not satisfied. So when I went off to school, it was like, “Wow! This is terrific!” I loved school and was interested in everything. My decision to go to college was like giving a thirsty man water. I even enjoyed taking exams because it was an opportunity to show what I knew or what I thought.

At that time, there was a Broad Field Social Science major in secondary education, which allowed me to take courses in many different subject areas. I graduated with that major and high honors in 1972.

By Susan (Huibregtse) Zeihen
Class of 1961

I lived in Radford for two years, from 1957 to 1959. I must’ve been there during a high enrollment year because the rooms that were meant for two, there were three people. Everybody had their doors open all the time. We communicated by leaving notes on our doors. We’d write something like, “Hi, went to dinner, come over later,” or “At the library, see you soon.” We also had a house mother and father, a couple named Mr. and Mrs. Smith, even though our dorm was all girls.

We had to sign in and sign out all the time. We had hours too; we had to be home by 10:30 p.m. during weeknights and mid-night on

Saturday. If Mr. Smith would be coming down the hall, somebody would holler, “Man on the floor!” because you could be in your room changing or something, since our doors were open a lot.

We never liked Mr. Smith hanging around, and Mrs. Smith was crabby. At 10:30 at night, one would be at each door. They look at the clock or their watch and say, “You’re late, girly!” You’d be running fast, coming back from the bars. Our cafeteria was in the basement, but there wasn’t much choice for food. You either got this slop or that slop.After Radford, I lived in Pollock House. There was this covered windowed hallway that was heated. We used to sit on these hard chairs in the hallway and smoke with our feet up on the radiators. There were 16 or so people who lived in Pollock House.

You had to have good grades and be an upperclassman. It was nice because there was no house mother. I was an elementary education major for one day, and I heard people talking about something — I can’t remember what but I think it was a class we had to take — and I thought, “Oh god, no I don’t want to do that.”

The next day I went back, and I switched to secondary education with an English emphasis. I didn’t know what to take; I had no idea. I just thought well, I’m good at reading and writing, but the thought of teaching, I wasn’t really thrilled with that idea. But in those days you were either a secretary, a nurse or a teacher.