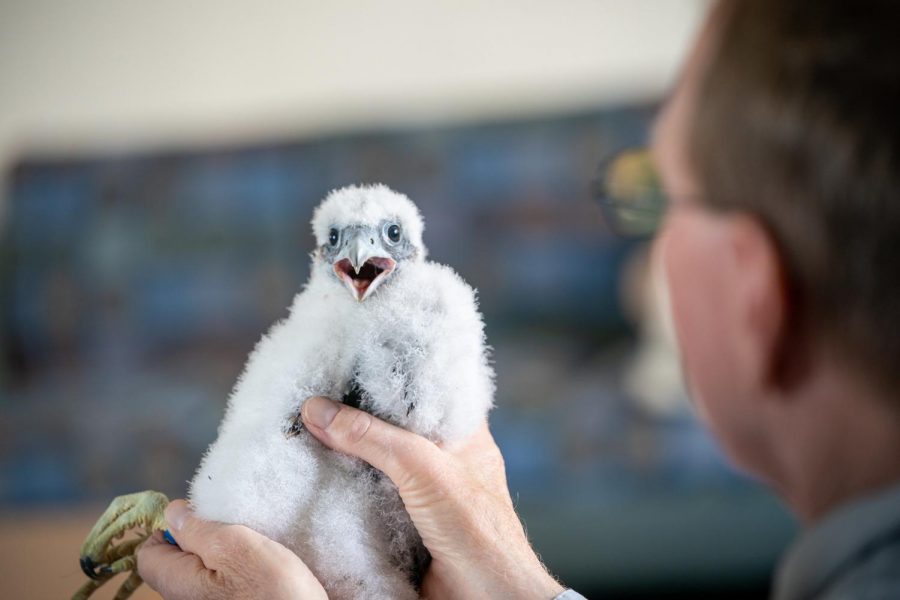 Last May, two peregrine falcons hatched in the nesting box located on top of the Gruenhagen Conference Center (GCC) as part of the UW Oshkosh Sustainability Institute’s contribution to restoring the species’ population decline in Wisconsin.

After a university-wide poll, the chicks were named after the top two companies that produced COVID-19 vaccines in the United States, Pfizer and Moderna.

The falcon project started in 2011 after the Sustainability Institute contacted Greg Septon, the founder of the Wisconsin Peregrine Falcon Recovery Project. In 1986, Septon began a recovery effort for the species after peregrine falcons were added to the federal and Wisconsin endangered species lists.

The main cause of the population decline was a toxic chemical called DDT, which was used as an insecticide to eliminate malaria and other insect-borne human diseases from the 1940s to 1970s in the United States. According to the U.S. Environmental Protection Agency, DDT has “adverse environmental effects and is classified as a probable human carcinogen.”

Peregrine falcons play an important role in the ecosystem by controlling the populations of their prey, but because the falcons are top predators of the food chain, they most often consume toxic chemicals and pesticides like DDT through their prey.

“DDT caused the eggs of peregrines and other raptor species to thin so much that many of the eggs broke during incubation,” the Sustainability Institute’s website said. Because of this prevalent issue, UW Oshkosh agreed to partner with the Wisconsin Peregrine Falcon Recovery Project.

The GCC was chosen as an ideal location for the nesting box because peregrine falcons “prefer relatively inaccessible rock ledges on the sides of steep bluffs and ledges on highrise buildings in urban areas,” according to the Wisconsin Department of Natural Resources.

In the spring of 2011, the first falcon couple was placed in the nesting box. Deborah, who was raised in Evanston, Illinois, and Hondo, who was raised in Sheboygan, Wisconsin, successfully produced two hatched chicks named Millennium and Titan. They were UWO’s first banded falcon chicks.

According to the Sustainability Institute, about three weeks after chicks hatch, they are given leg bands with special letter/number combinations. These combinations are recorded and used for research.

Pfizer and Moderna’s parents, Julia and Gaylord, have been producing chicks together for several years. According to nesting season reports by Septon, the GCC’s nesting box has allowed four different falcon parent couples to produce 22 hatched chicks between 2011 and 2019.

With the ban of DDT in 1972 in the U.S. and human intervention like UWO’s nesting box, the peregrine falcon population has been able to recover enough to be delisted from the federal endangered species list.