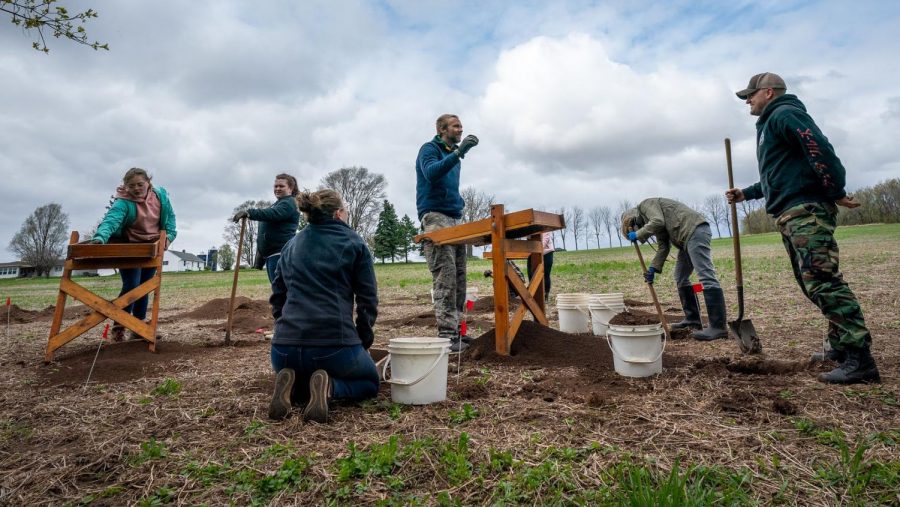 Courtesy of UW Oshkosh Today UW Oshkosh anthropology students shovel and sift through soil in search of evidence relating to the disappearance of Starkie Swenson.

After an exhilarating three-week spring interim class, anthropology students at UW Oshkosh, along with their professor and officers with the Winnebago County Sheriff’s Department, are still wondering: “Where is Starkie Swenson?”

Starkie Swenson, a 67-year-old man from Neenah, Wisconsin, disappeared in 1983 after he rode away from his house on a bicycle. For years, the case stayed dormant, but eventually there were breaks in the case.

Swenson’s lover’s ex-husband, John Andrews, pleaded guilty to “negligent use of a motor vehicle” in 1994, according to prosecutors. Swenson and Andrews were in a love triangle with Claire Andrews, and it was believed that John Andrews ran over Swenson and killed him.

Karsten and his students searched for Swenson’s remains in late May and early June.

The preparation for going out and searching prior to the interim started with Karsten and others walking the property in the Town of Rushford, just outside the city of Omro, Wisconsin. The search location was determined by sheriff detectives, who had talked to the property owners in the 1980s and 1990s and learned they saw John Andrews on the property. The landowners pointed the police to the general area where they had seen him.

Karsten and the county conducted initial ground-penetrating radar scanning and test digging in the area to help the class avoid disturbing any of the farmer’s crops while excavating in the three-week class.

Bailey Raab, who recently graduated from UWO with an anthropology major and psychology minor in the spring of 2021, took part in this interim class. She is currently working at the Archaeological Research Institute in Lawrenceburg, Indiana as an archaeological technician doing some field work.

When Karsten originally got the case, Raab was in two classes with him and was also his lab assistant. She was able to help with the initial survey alongside Karsten and a few other students.

“I thought that it would be great to get more experience, and I really thought the case was interesting,” Raab said. “[I] wanted to help bring closure to the family, so I signed up for the class.”

Raab said a cadaver dog came out to assess the area, and a team of divers from the police department went through the pond on the property.

Often, she was excavating in a group of people where they would switch off shoveling, carrying buckets and screening the soil to find any pieces of bone. A few times Raab used a metal detector to attempt to locate anything metallic below the soil that may have been helpful to the case.

Ultimately, no human bones were found, but a possible lead in the case was discovered.

A small piece of headlight was found, possibly relating to the case. However, it is impossible to know if this headlight is connected to the car that was driven by John Andrews.

The headlight is from the right time period of the 1970s or so, but the issue is if John Andrews would have had time to repair a damaged front end before his car was impounded and examined by the state crime lab.

“The reason we were interested in the headlight is because of the fact that it wasn’t left on the surface with other automotive parts,” Karsten said. “We didn’t find a whole headlight, or the backing of one of these headlights, or other pieces. It was just a broken piece of glass from a headlight from that era.”

The piece had depressed into the ground a little bit, which would happen with time, and for the case, it does fit a scenario where John Andrews drove his car through the area they were looking at. A piece of headlight would have fallen off in the dark and compressed into the Earth.

“Although it’s intriguing, it could also have come from garbage that was taken down there by people who had owned the property,” Karsten said.

Whether or not this headlight piece is connected to the case, it is a step in the right direction. This case is, by far, not closed and will pick up in the fall.

“We have plans to be back out at the site soon,” Karsten said. “We’re going to use some heavy equipment, in terms of excavators and such, to go out and continue to work the site and look at areas we want to keep investigating.”

As of now, Karsten and his friend Matt Hiskes’s podcast “Cold Case: Frozen Tundra,” has paused. Episodes may once again continue if there is a new break in the case.

“God willing, we find Starkie Swenson’s remains, I think we’d put up an episode or two to update the people who have listened,” Karsten said. “Until we have something new to say, there aren’t any more episodes right now.”