UWO to become carbon neutral by 2030 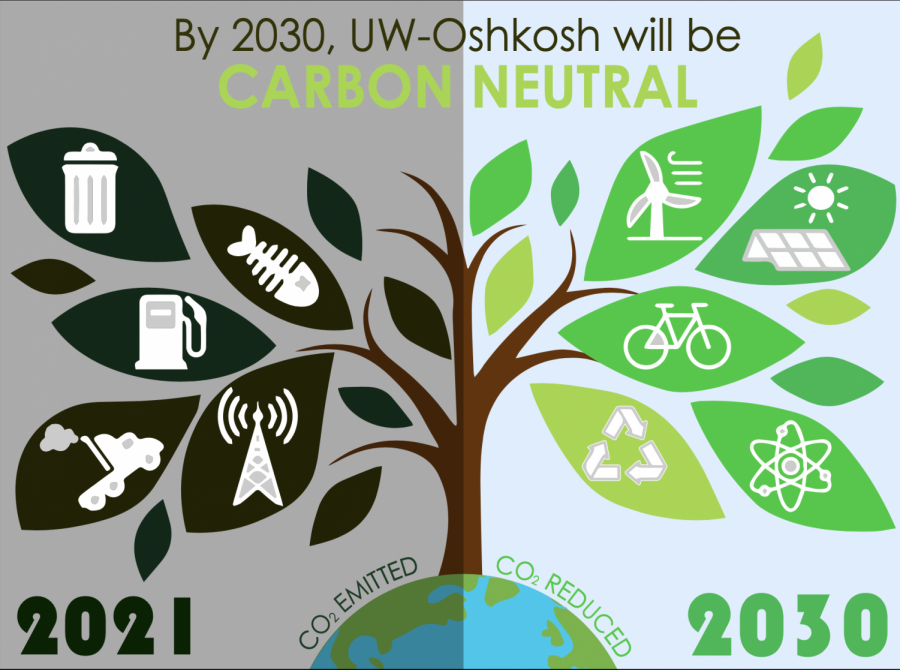 Graphic by Mallory Knight The newly formed Climate Action Committee is planning on how to get the UWO campus to carbon neutral by 2030. To reach this, aggressive changes need to happen all over campus, and fast.

A new Climate Action Committee has formed as part of an effort to combat climate change issues and to make UW Oshkosh a more sustainable campus.

Campus Sustainability Director Bradley Spanbauer said the committee was officially formed in the spring of 2021 and will become active later this year. The long-term goal is to develop a plan on how to reduce emissions produced by UWO and to make the campus carbon neutral by 2030.

The committee will research ways to make the campus more sustainable and will make recommendations to campus facilities on ways to switch to renewable energy, make efficiency upgrades and decrease emissions from waste produced by campus operations.

“We will draft a plan that will make recommendations to inform the administration about how to best address university emissions with a goal of climate neutrality,” Spanbauer said.

Carbon neutrality by 2030, which is supported by Chancellor Andrew Leavitt, was requested by campus student activists.

“It is an aggressive, but achievable goal,” Spanbauer said. “There are ways to take a big bite out of our emissions, but these can sometimes be perceived as costly. So it will be a balance of determining what we can spend and over what period of time to reach net zero emissions.”

The director of the Sustainability Institute for Regional Transformations, Stephanie Spehar, said UWO has recognized the importance of combating climate change as the university has made sustainability one of four fundamental elements to uphold.

“If we want to avoid the worst impacts of climate change, we need to make drastic changes immediately,” Spehar said. “The technology and tools to reduce our institution’s carbon footprint are out there ⁠— we just need to figure out how to apply them here at UWO.”

The committee will write annual Climate Action Plans, which is required by the American Colleges and Universities Presidents Climate Commitment (ACUPCC).
UWO signed the ACUPCC in 2007 and pledged to aim for a sustainable and climate neutral campus by the mid-century.

Climate Action Plans will address each year’s greenhouse gas emissions produced by the campus. This report will also include recommendations of alternatives for switching to renewable energy to meet the neutrality goal.

The committee’s Climate Action Plans will have an impact on overall campus operations.

“Ideally, the actions of this committee will improve all aspects of campus life,” Spanbauer said. “Switching to renewable energy means cleaner air which will improve overall public health.”

Currently, the committee consists of a mix of faculty and staff, but Spanbauer said they are looking for student participation, too.

“There are three student positions that will serve on this committee,” Spanbauer said. “Their voice is important in helping us set goals for becoming climate neutral.”

Spehar said universities can, and should, be leaders in sustainability in their communities.

“Not only can we educate the next generation of citizens and leaders on why sustainability and issues like climate change are crucially important — we can lead by example by making our operations and facilities as low-carbon and low-waste as possible,” Spehar said.