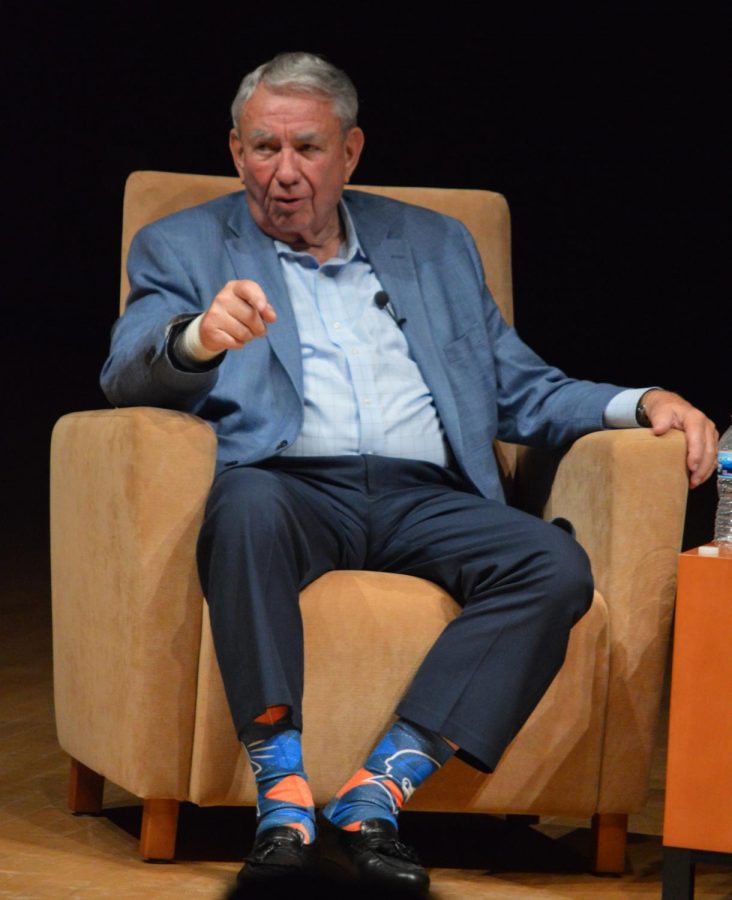 Advance-Titan photo UW System Interim President Tommy Thompson spoke about his political career and the future of Wisconsin’s public universities Wednesday night at UW Oshkosh. Thompson was on campus for the UW System Board of Regents meeting this week. It is the first time in seven years that UWO has hosted the regents. A search for a new system president is underway and listening sessions were held at UWO on Sept. 27.

“Your voice, your ideas, and your input are an extremely valuable part of the search process,” Chancellor Andy Leavitt said in an email to the university community.

Current President Tommy Thompson has been serving in an interim role since July 1, 2020, after succeeding Ray Cross who served six years from February 2014 to June 2020. Thompson is now stepping down and a search committee has been formed in search for the eighth president of the University of Wisconsin System.

UW System Board of Regents President Edmund Manydeeds III charged the committee with its mission to begin the national search, which was convened on Aug. 20, 2021.

“Absolutely unequivocally, this is the biggest crowd we’ve had and you are the 11th campus that I have been to in two weeks,” Regent Vice President Chair Karen Walsh said. “Thank you so much for your engagement.”

The search and screening committee consists of people drawn as representatives from each of the campuses around the UW System, as well as community members.

The full list of Regents can be found here: https://www.wisconsin.edu/regents/about-the-regents/.

This committee is the first in line to view applications as they come in. The soft deadline for applications is Oct. 15. Later applications will be accepted until the end of October if there is enough time and availability to look them over.

The committee will then come together and look at their evaluations of the people who applied and talk about who will be given an invitation for a semi-finalist interview.

Semi-finalist interviews will be scheduled sometime in November, and when that process is completed, the search and screen committee will convene again for the last time. They will pick a group of people to continue to the next level.

The search committee will form a smaller group of seven regents, the Special Regent Committee, chaired by Manydeeds. Their job is to echo the process that was used to hire past Presidents Cross and Riley and name finalists in the running. When someone reaches the finalist stage, their names will be made public, as required by law.

Once finalists are chosen, they will meet with a group of constituents to demonstrate how they operate with all different kinds of people.

Once that process is completed, the Special Regent Committee will convene to talk about who they will recommend to go to the final vote of the Board of Regents.

“This hire, of the system president and also chancellor hires, are in the purview responsibility of the regents,” Walsh said. “We take it very seriously, which is why we’re here today at the start of this process giving you essentially a seat at the table where we hear from you. Our committee can use your input to evaluate the candidates as they come in.”

Walsh estimates the regents will vote in a closed session no later than February for the new system president.