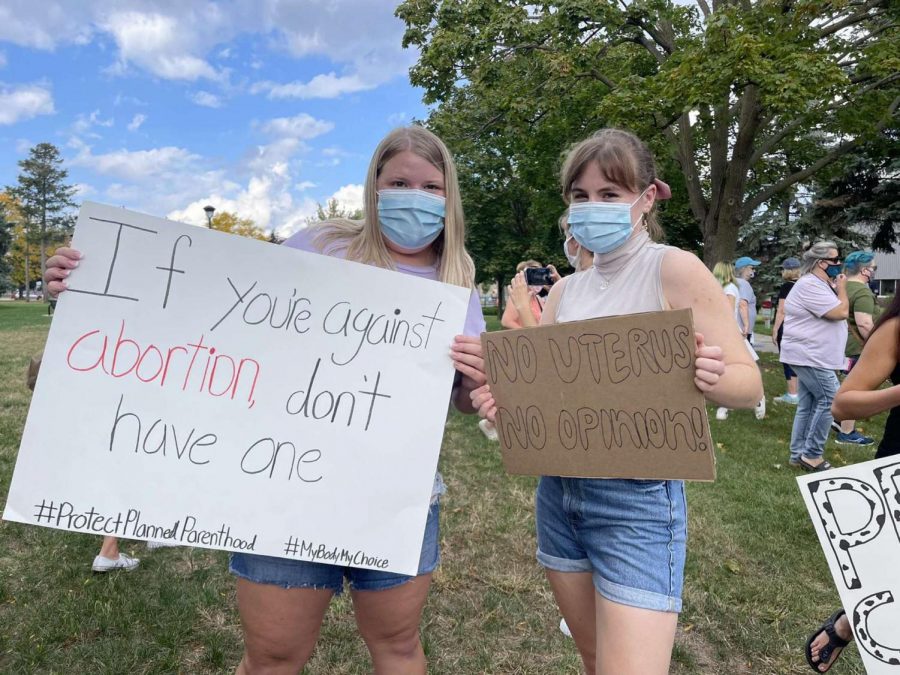 Mattie Beck / Advance-Titan Oshkosh held a Women’s March for reproductive rights on Oct. 2. The event attracted those of all ages and genders who shared the common goal of women’s rights.

All throughout the country, Women’s Marches were held on Oct. 2. The marches were for women’s reproductive rights.

The event was named The Rally for Abortion Justice in response to the passing of the Texas Abortion Law, which bans abortion after six weeks into a pregnancy.

This year Oshkosh held a march for abortion rights, and the turnout was surprising.

People of a diverse range of ages and genders came to the event, some young enough to be pushed in strollers.

Everyone came together at the Women’s March that Saturday to march through the streets of Oshkosh together.

The march was fairly short, just stretching from Court Street to Roe Park, but the message was still powerful.

Signs with slogans like “No Uterus, No Opinion,” “Ruth Sent Me,” “My Body, My Choice” and many more could be seen.

While walking up and down the streets, there were also chants of “My Body, My Choice,” “Our Bodies, Our Choice” and others to send the message out loud and clear.

Attendees marched strongly through the streets holding up their signs, chanting and peacefully advocating for abortion rights.

Once the march came to an end in Roe Park, two speakers came to present their views and their campaigns.

Outagamie County Executive Tom Nelson and Wisconsin State Treasurer Sarah Godlewski are both running for Senate, aiming to get Ron Johnson out of office.

Both presented their reasons for running for Senate, and expressed a desire to make sure what happened in Texas does not happen in Wisconsin.

The crowd was full of people cheering them on.

The Women’s March in Oshkosh may not have been the biggest one across the country, but it was one where people with different backgrounds came together to march for one common goal: women’s rights.