Run with the Cops returns after a year off 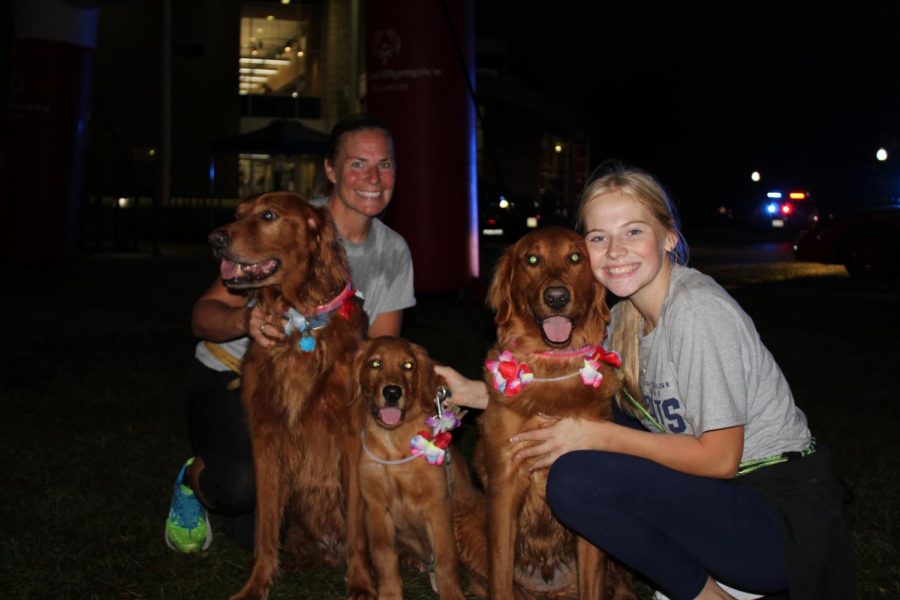 Katie Pulvermacher / Advance-Titan Runner Shelly Birling (left) and her daugher (right) ran in the Run with the Cops 5k event on Oct. 7. All of the funds raised for the event directly benefit Special Olympics Wisconsin, which the Birling family supports. Squad cars were lit up all along the course for runners to see.

Community members and UW Oshkosh students were able to run alongside officers from local law enforcement agencies in and around Oshkosh during Run with the Cops on Oct. 7.

After a year off from the event in 2020, Run with the Cops made its return with 100% of the funds raised directly benefiting Special Olympics Wisconsin athletes. The event started with children’s events in the afternoon and concluded with a night 5k around the UWO campus.

The average yearly expense to support one Special Olympics athlete is $552. This event helps support them.

“I’ve been hanging out with the athletes for 10 or 15 years and there’s just something about a Special Olympics athlete,” said University Captain of Police Chris Tarmann. “They have no concern for who you are; they just embrace you.”

Tarmann says the two most important reasons people should come to this event are to support the athletes and to connect police officers with the community.

“When you come out here, you see a bunch of cops all over the place wearing uniforms, but you also see the human side of them,” Tarmann said. “They’re having a great time, they’re smiling, you get to connect with them, shake their hand.”

While running around campus, multitudes of squad cars are around the course, lighting up the path. Guests are encouraged to wear glow sticks and other glow-in-the-dark attire with the help from glow stations posted around the course. Many brought dogs to run in the race as well.

Tarmann guessed around 300 to 400 runners participated. He hopes the numbers can reach the thousands again like past years.

Community member Shelly Birling brought her three dogs and daughter out to the event.

“I found out about this race a couple years ago from one of our students who goes here,” Birling said. “My family and I are really into special needs.”

Birling said a couple years ago her family pushed a friend of theirs with special needs in the race.

“I was supposed to help push, but I ended up getting sick, so my husband ended up having to go from couch to 5k,” Birling said. “I cheered them on at the end, and I’ve done the races ever since.”

Birling said people should come out to support the police, give back and tell them “thank you” for all they do. Many officers run in the race with their gear on.

There are many sponsors of the event. Star Protection, a security company in Oshkosh, is the main sponsor. Others include Polito’s Pizza, Subway, Kwik Trip, Dunkin’, UWO ROTC, UWO Football, Oshkosh Student Association and others. Even Lightning McQueen from the Pixar film Cars made an appearance.

“[This event] is so different than if [police officers] show up in some situation they have to manage,” Tarmann said. “The athletes are so excited all the time and I love that. You can soak that in.”