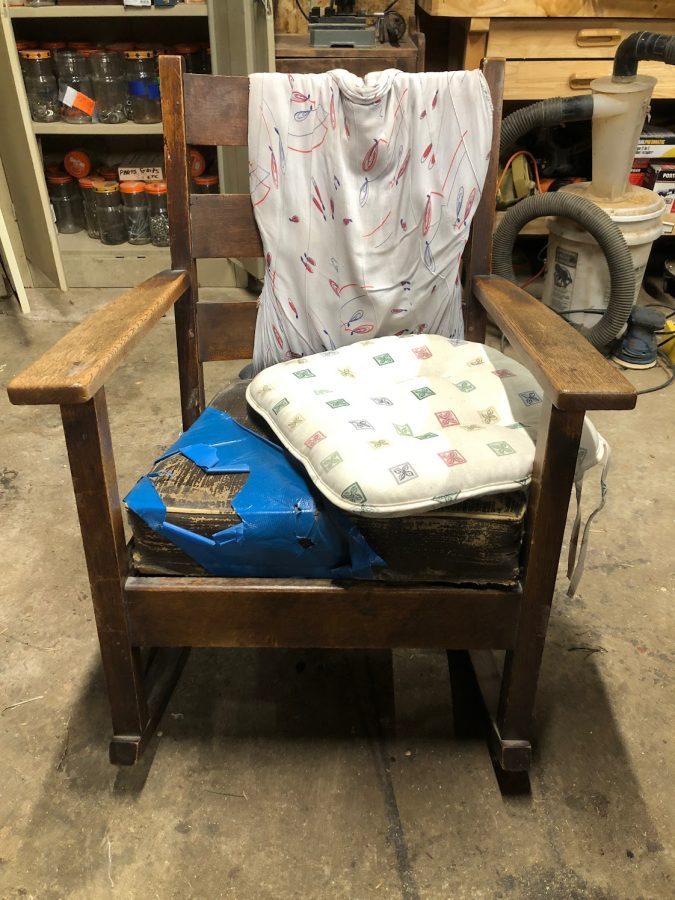 A journalism professor at UWO recently used his craftsmanship in refinishing furniture to bring back a woman’s late grandmother’s beloved, worn-out chair in Redgranite, WI back in late May.

Vincent Filak has a unique passion for refinishing timeworn furniture. Filak started this hobby when a PR professor and friend of his from Indiana explained to him that even if he was not great at building furniture, he could surely refinish it.

“If you took your great grandma’s wooden dresser that’d been in your family forever, you threw it off the roof of Sage, it hit the parking lot, and you handed me the pieces and said ‘here’s a picture of what it looked like, make it look like new,’ you’d never know anything happened to it,” Filak said. “If you handed me four boards and said ‘build me a square’ you’d be better off just setting the wood on fire.”

After taking the time to start understanding the means of refinishing and picking up lots of tips and tricks along the way, Filak initiated lots of projects.

Eventually, people picked up on his skills and started asking if he could refinish pieces for them. With time, Filak accumulated more furniture than he knew what to do with, so he started using it as a good excuse to give as gifts.

“When former students of mine would get married, I’d give them a piece of furniture that I’d refinished,” Filak said. “I always thought that your first home becomes a home when you have a nice piece of furniture. Something that’s valuable to you, even if it’s not particularly valuable.”

Filak likes to go by a metaphor that runs: “Wood is a very forgiving medium. No matter how beat up it gets, or how ruined it gets, if you put enough time and patience into it, it can always be fully restored to what it was, maybe even sometimes better.”

This metaphor was very promising when Filak came across a woman’s chair.

Filak was driving to Wautoma to pick up a part for the truck he was working on, and he drove through Redgranite when he stumbled across an estate sale sign. He did not have enough time to stop then, but after he picked up the part and was driving back home, the sign was still up and he pulled over.

“There were nice things [at the estate sale], but the only thing that caught my eye was the chair,” Filak said. “It’s a chance meeting.”

He paid $10 for the chair, and when he loaded it into his truck, a woman wandered over and said ‘I just wanted to say goodbye to my chair’ and put her hand on it like she was saying goodbye to a pet.

“It was [the woman’s] grandmother’s chair and her grandmother basically lived in it,” Filak said.

By the way the wood feels and what style the furniture was crafted in helps determine how old a piece of furniture is. If Filak were to put money on it, the chair is right around 100 years old.

Filak said that when he buys furniture from people, he asks people to tell him about the piece.

“If they start off ‘it’s maple, it’s rochester, it’s a Smith Mill,’ I’ll probably buy it, refinish it, and either keep it for myself, or sell it or give it as a gift,” Filak said. “But if they start with ‘oh, that was my grandpa’s table, he always used to sit there and play cards’ or ‘we used to use that as a family gathering room table,’ then I’m like ‘you don’t want to sell it, you want it refinished.’”

After offering the woman to have her chair refinished, Filak embarked on a quick two-day process of restoring the chair.

Filak said the look on the woman’s face was worth it and whatever they would have paid him for his job was not worth as much as he got out of the woman’s reaction.

“It was an estate sale, so I know they lost somebody recently,” Filak said. “You’re feeling miserable, so you might as well get something nice to try to feel less miserable. It was a better purchase than I had the right to expect and I’m glad it turned out the way it did.”