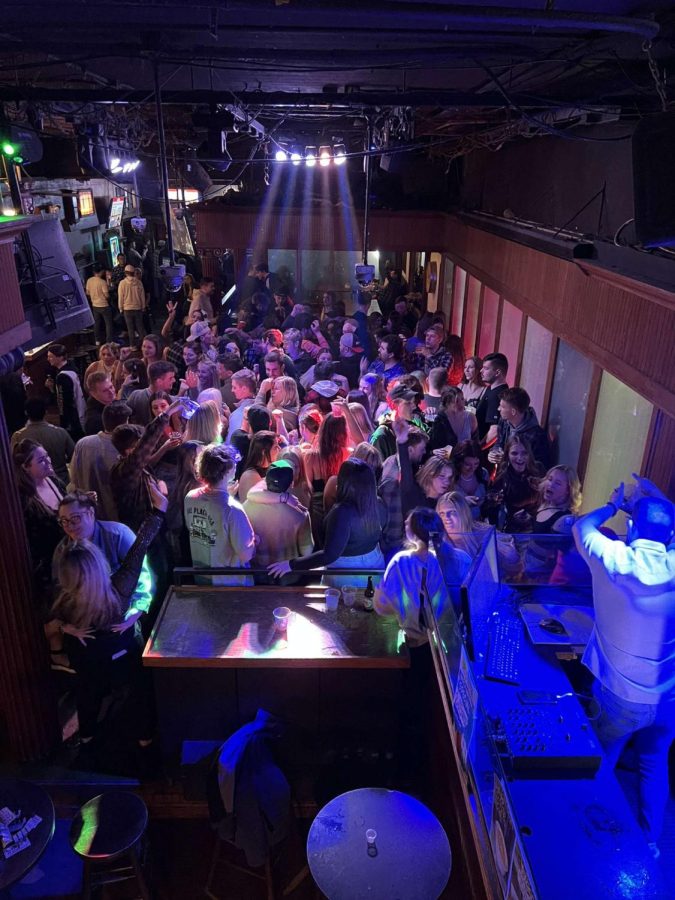 Courtesy of Bailey Tomczak Molly’s is one bar located in Oshkosh that is a popular location during Pub Crawl.

Property owners surrounding the UW Oshkosh campus hosted hundreds of people for the semiannual Pub Crawl over the weekend.

Pub Crawl took place on April 8-10 at houses, apartments and bars surrounding campus where students of all ages indulged in drinking alcohol in large groups. And they did indulge, if the beer cans and other bottles of liquor scattered throughout the yards were any indication.

From outdoor beer pong to mosh pits of people dancing and drinking with one another, the event includes a variety of alcohol-related activities.

An anonymous — and underage — student said she has been participating in Pub Crawl since she first started attending school in Oshkosh. She said she wanted to participate in the event to socialize and make more friends in the area.

“I started going to join in on the social culture of the school to do something with my roommates, but it also sounded like a fun event to take part in,” she said.

“The risks include $300+ police fines and tickets with public intoxication and underage tickets if you are not 21 yet,” she said. “With drinking too much alcohol [you can hurt] your health or doing something stupid you would later regret.”

But despite understanding the fines, she said she still enjoys certain aspects of the event.

“The parts of Pub Crawl I enjoy are the social aspects of drinking in a large group, bonding with those who you are drinking with and making fun memories with friends,” she said.

While the student said she enjoys mingling with others, she also said that the drinking and stunts can be a bit extreme. She said that those performing stunts sometimes end up hurting themselves.

“The parts I don’t enjoy would be the excessive drinking and the tendency for people to injure themselves and perform dangerous stunts like jumping off roofs,” she said. “Some of the craziest things I have seen are people jumping off roofs onto tables and people drinking a large portion of bottles of hard liquor through funnels. [I have also seen] under-age kids jumping fences and running into traffic to avoid cops, as well as people getting tickets just by half stepping onto the [road].”

A semiannual event, Pub Crawl is also held in October each year.