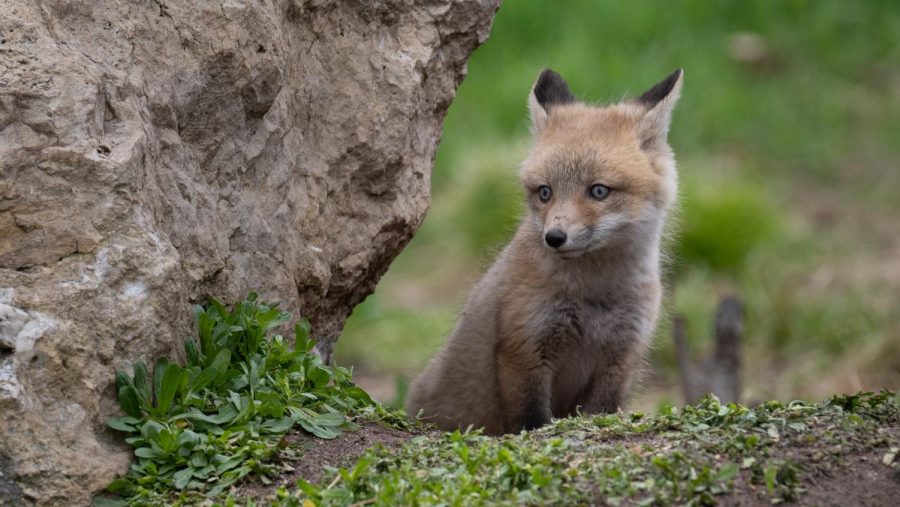 Courtesy of UWO Flickr Six or seven foxes make a new home between Reeve Union and Horizon Village in an area that is now gated off. What does the fox say? Students shouldn’t get close enough to find out. There are signs surrounding the area telling people to keep their distance.

“Habitat for wildlife is continually shrinking – I can at least provide a way station.” – Peter Coyote, American actor, director, screenwriter, author and narrator of films, theater, television and audiobooks.

That way station has become UW Oshkosh, where over the past few weeks there has been increased sightings of a new family of red foxes on campus.

The family, which consists of two adults and four babies, or kits, live in a den located in the bioswale between Reeve Memorial Union and Horizon Hall. The kits, estimated to be 2 or 3 months old, have been seen running around and playing with each other daily in this area, which is now roped off to ensure people don’t get too close.

“We have all kinds of wildlife on campus,” said Lisa Mick, the university’s grounds and automotive supervisor. “Normally, they show up after the students leave, but this year is special.”

Last year, several adult foxes came to campus and their activity was noticed near Sage Hall’s bioswale. This year, they have decided to venture closer to campus.

According to the Humane Society, an animal protection organization, foxes are usually not dangerous to humans except when they are rabid, which is rare, and when they are captured or provoked.

On April 28, the Grounds Crew installed a temporary string fence to create a barrier between campus residents and the family of foxes due to multiple reports of students attempting to pet and hold the foxes.

“It is the worst thing possible for both the fox and the community,” Mick said.. “They are afraid of humans, and if trapped they may bite to get free.”

According to the National Wildlife Federation, having foxes removed and relocated from their original dens will most likely be fatal for them. As for now, signs will be displayed around the fence stating to not enter, touch or attempt to feed the foxes, Mick said.

“It is imperative that we protect these creatures from ourselves,” she said. “We create a haven within the city with this campus and our practices, and when the animals take us up on our offer to live here, we need to protect them from harm.”