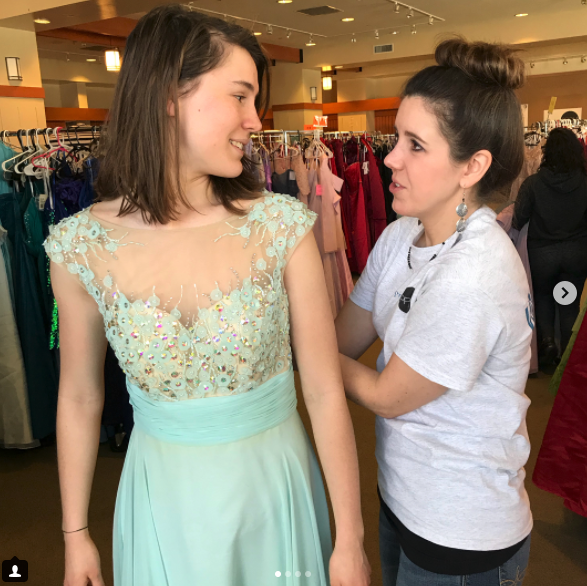 As a founder of two nonprofit organizations, Jeni Asaba serves as a prime example of finding success in volunteerism.

Today she juggles the responsibilities of managing two nonprofit organizations and a being a full-time senior manager of Community Engagement and Advocacy at  software company Jamf, all on top of raising two sons with another child on the way.

“Volunteerism has always been a part of my life,” said Asaba, a UW Oshkosh alumna.

No stranger to giving her time, Asaba began volunteering as a girl at her local soup kitchen. But her desire and drive to work with nonprofits continued after receiving her college degree.

Thus, Project Prom was born, a program now based in Maple Grove, Minnesota, focused on donating dresses to prom attendees.

“I knew how expensive prom dresses were,” Asaba said. “So I thought it was worth running a program that collected, and then donated, dresses to students.”

A 2015 survey by Visa showed that the American family spends an average of $919 on prom, with much of this cost allotted for the dress. Project Prom strives to alleviate this financial burden on families by providing dresses to students.

Former recipient of a Project Prom dress, Hannah Toutge said that the program allowed her to attend her first prom after wondering if she could afford a dress.

“The prices of dresses were daunting and I didn’t know how my parents or I would be able to cover such an extravagant cost,” Toutge said.

Thanks to Project Prom, Toutge managed to find a dress and hone her skills, working as the program’s social media manager for a year and sharpening her professional and communication skills that she would later utilize in her career.

“My heart for service to individuals and passion for communication strategy showed in my work with Project Prom years ago and still shows in my professional career today,” Toutge said.

Since the project’s beginnings, Project Prom has donated more than 3,000 dresses to girls from Minnesota and western Wisconsin despite doubts from former co-workers.

“My interns told me it would never work,” Asaba said. “Well they were wrong. My first year, we filled the office with more than 200 dresses. It was a huge success!”

On top of her full-time job, taking care of her family and distributing prom dresses, Asaba is also the co-founder of Building for Bridget, an organization with the goal of bringing a positive education experience to children in Uganda.

According to Asaba, many Ugandan children have little access to education, and often are deterred from attending school due to family obligations.

“The children in Uganda … have little opportunities,” Asaba said. “Many parents find it’s more valuable to have their children stay home and work in the fields to help provide for their

Building for Bridget collects monetary donations for school supplies, uniforms, teacher salaries and even to build a structurally sound campus. The building will be complete by the 2023 school year, which begins in February.

“We want the kids to believe their dreams are possible,” she said. “And our school will help them get the necessary skills they need to be successful as they move to secondary school and on.”

The students won’t be the only ones who have learned something, though.

Asaba said volunteerism and getting involved in your community has had lasting benefits in her personal life and her professional career.

“My volunteerism … taught me a lot about project organization, time management and the overall skill of handling multiple responsibilities at any given time,” Asaba said.

Asaba encourages students to volunteer and/or participate in programs they are interested in. For her, this included volunteer efforts at the Newman Center and Big Brothers Big Sisters, as well as writing for The Advance-Titan and securing internships.

“My advice to any college student is to discover your passions and get involved with people and programs that support these passions — early and often,” she said. “Being involved with The Advance-Titan and completing journalism internships was essential to my success after graduation.”

Asaba said alongside progressing in her professional career, it’s important to do what she can to give back to the community, a lesson she learned from her parents.

“I feel very lucky that I learned such an important lesson at a young age,” Asaba said. “It’s what I strive to teach my own children so they, too, can embrace the power of giving their time, talent and treasure to others in need.”

Monetary donations can be made to both nonprofits online at projectprom.us and buildingforbridget.org.

Editor’s Note: This story has been updated to include Asaba’s official work title and to clarify that Toutge no longer works for Project Prom.