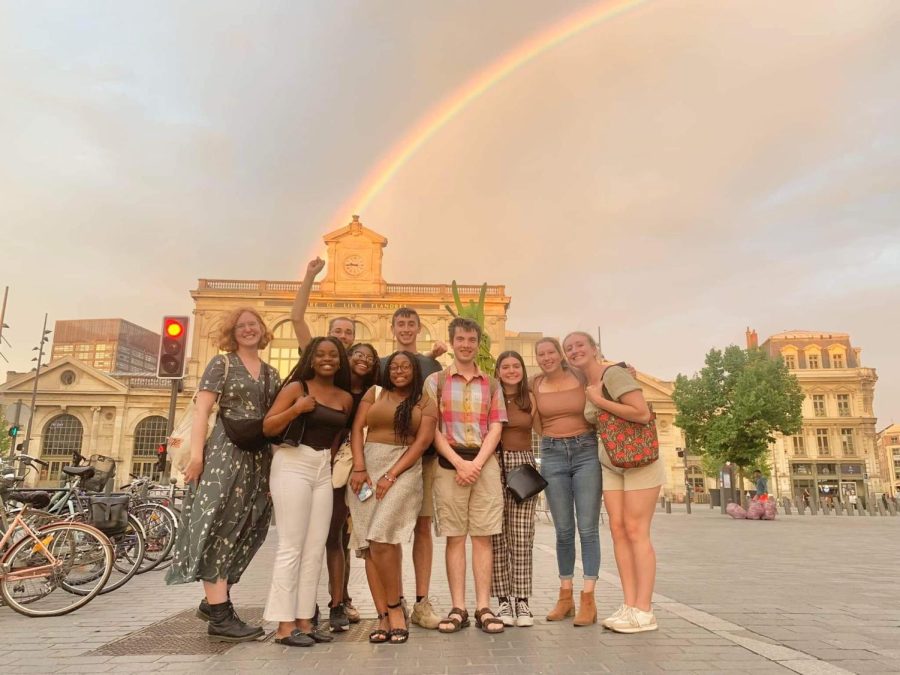 Photo courtesy Emma Cumbers / The Advance-Titan -- UWO student Emma Cumbers, far right, studied in France and said the hardest part of her trip was staying on task in a classroom when there was so much else to see.

Getting back into the swing of the school year can be tedious. Registering for classes, buying textbooks and the hardest part, showing up to class. But some students are embarking on an entirely new and eye-opening experience: studying abroad.

UW Oshkosh offers students the ability to study abroad in a variety of countries, from Spain and France, to Japan and South Korea. Students can study during the typical fall and spring semesters, or they can study during J-term or May-term.

“I decided to study abroad since I always wanted to travel,” said Mira LaCrosse, a fourth-year student majoring in graphic design. “It felt unreal. It was an opportunity that was once in a lifetime.”

LaCrosse studied in South Korea, where she gained a stronger appreciation for the country’s culture.

She was initially deterred from studying abroad due to the cost. However, after learning about less-expensive summer courses, she began to regain interest.

Kelsey McDaniels, the assistant director of the Study Abroad program, recognized this concern. “Finances are a huge barrier because students, in most cases, are already taking out loans for college. And they think that studying abroad will be a huge added cost.”

However, McDaniels offered a reprieve: “It doesn’t have to be,” she said.

“The trips vary in cost depending on where you go and for how long. Some of the semester programs that we have may be the same cost or less than a semester at UW Oshkosh,” she said. “Or, for example, by studying through our exchange in Germany, the cost is only about $2,000 to $3,000 more than a semester at UWO, and that cost includes airfare and housing. It definitely can be affordable, and there are scholarships available specifically for study abroad programs that students can apply for.”

McDaniels believes that the benefits of the experience outweigh the increase in cost, and LaCrosse said she agrees.

“I am forever appreciative and grateful for being able to study abroad,” LaCrosse said. “Twice a week after the lecture class, we would go on field trips to historical and cultural sites. I thought it was actually a great way to introduce someone to an unknown culture and country.”

Studying abroad is a 24/7 encounter with new ideas and adventures. It provides students with the opportunity to learn more about cultures and places of historical and personal interest.

“Studying abroad was one of the best experiences of my life,” said Emma Cumbers, a third-year student who studied in France.

She chose France because she had a minor in French and because visiting the country had always been on her bucket list.

“When I first arrived, I was beyond excited yet terrified at the same time,” she said.“Everything was so new and exciting. I really just wanted to learn as much as I could and enjoy every minute I had there.”

Cumbers said that, at first, the three-hour long lectures were one of the biggest differences. Still, they didn’t feel long for her because there were always new things happening.

“The people you have a class with are an amazing aspect as well,” she said.“They’re all from different countries, and you can learn so much from them.”

“For me, the hardest part was staying on task in a classroom,” she said. “It can be so difficult to focus on school and be in a classroom when you’re in France. There are so many amazing things you [would] rather be a part of outside, so staying focused on classwork was a bit of a challenge.”

LaCrosse agreed, saying that the hardest part of studying abroad was staying focused on academics.

“I know other students just wanted to travel around and be a tourist, but this is a college class for which we will be getting credits,” she said.

But studying abroad isn’t simply the same-old classroom in a foreign country. It’s an opportunity to gain unique and hands-on experiences in a culturally foreign and rich place.

“This last year we had two faculty from the anthropology department take a group of students to Slovenia … to participate in an archeological dig,” McDaniels said. ” There are areas in Slovenia that haven’t been excavated before, so our students are excavating and finding things that have been there for thousands of years.”

This year, some UWO nursing students will be studying abroad and working on their clinical training in Peru and Spain. “They’re getting to see what a healthcare system looks like in a different country, and on top of that, it’s a great resume booster,” McDaniels said.

“Most businesses have some sort of global aspect to them, or you might be dealing with people who have different cultural backgrounds, so I think that having this experience prepares students for future challenges in their future jobs,” she said. “It helps their communication and their flexibility.”

Cumbers, who believes that her studies in France greatly improved her academic career, highly recommends that her fellow students take advantage of the opportunity.

“I recommend studying abroad to everyone. It was probably the coolest thing I’ve ever done and something I think everyone should be able to experience for themselves,” she said. “I know money can be a bit of an obstacle, but Oshkosh has scholarships all of the time to aid with that. I would recommend researching the various opportunities Oshkosh offers and being open to where a program may lead you even if you’re apprehensive.”