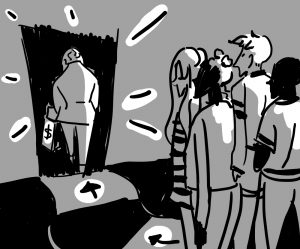 As professionals progress in their career paths, their skills improve. These acquired skills can be seen as especially important for teachers and professors, as they transfer their acquired knowledge and expertise to students.

When professors retire, their absence can have an effect on both the students they teach and the department they are a part of because of the experience that is leaving with them.

In Scott Jaschik’s November 13, 2007 article titled “When and Why Professors Retire,” Joan Lorden said when professors retire, universities are losing the backbones of departments.

Retirement of more experienced professors could become a problem as UW Oshkosh offers retirement packages as an incentive for professors to retire early.

“The program provides a one-time cash payment equal to 50 percent of an employee’s base salary as of March 1 to individuals who are at least 60 years old and have 25 years of experience at any UW System institution or other state agency,” Shuda said. “Roughly 100 of the University’s nearly 1,335 full-time employees are eligible for the offer.”

Of the 47 employees that took the offer, 14 were faculty members.

Although pushing professors to retire early could benefit the University economically, it could hurt students academically. Students will not receive as good of an education if tenured professors leave and new, less experienced ones take their place.

Students who take courses with newer professors may not learn as much in-depth information as students who were taught by more knowledgeable professors.

These packages allow tenured or more experienced professors to leave earlier than originally anticipated, so students are losing out on years of classes with highly knowledgeable professors.

Without hiring back any positions, UWO has already saved $3 million. Once they hire back some positions, that number will go down. The professors hired to fill those positions will most likely be part-time or new professors who will be paid less because they do not have as much experience as tenured or longer-working professors.

By doing this, UWO is saving money and bringing in new employees with fresh ideas. However, students may not receive the same level of education they want, deserve and pay thousands of dollars for.

In a March 4, 2015 article titled “New Studies Find That, for Teachers, Experience Really Does Matter,” Stephen Sawchuk said the average teacher’s ability to boost student achievement increases throughout the first decade of their career.

According to Sawchuk, having more years of experience on the job can be linked to lower rates of student absenteeism.

Because these professors can be seen as better-qualified when it comes to handling both their students and their teaching, they should be recognized for their work rather than urged to retire. When professors retire, universities lose valuable experience that newer professors could take years to match.
UWO should consider the level of education students will be receiving when they push certain professors toward early retirement and hire back less qualified ones.

Losing a lot of valuable experience and knowledge is hindering toward the betterment of both the University and students.

When professors retire, UWO needs to make sure they take into consideration who they are hiring to replace them.

New professors will make an impact on students’ education, and that impact needs to be a positive one.