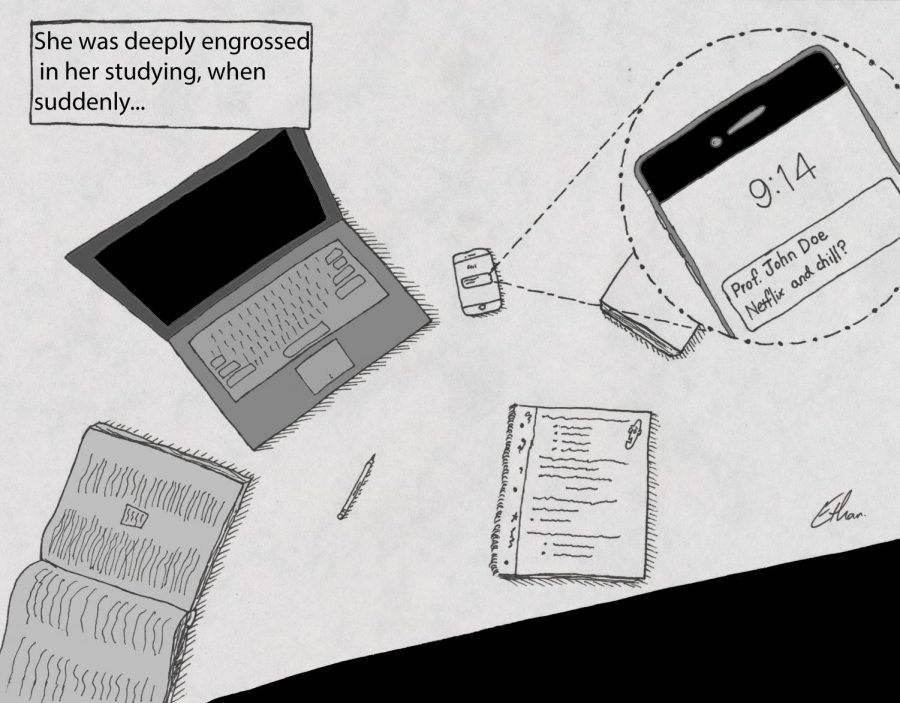 Professors are similar to parents in that they take on the role to care, guide and provide support.

What happens when professors overstep that role, and what repercussions should they face?

Obviously, what has happened with recent sexual harassment and assault cases on UW Oshkosh is not the perfect solution.

Last week, the Advance-Titan covered a story about a former art professor who the University found guilty of violating the UW system rules on sexual harassment and assault with a female student.

Michael Beitz pursued a sexual relationship with a female student for three years, which included searching campus for her, kissing her without her consent and sexually assaulting her.

Beitz resigned in 2015 and got a job at University of Colorado Boulder where his record didn’t follow him. He is currently working there until May of 2019.

In early September, the Advance-Titan also covered a story on former volleyball coach Brian Schaefer who sexually assaulted one of his players.

Schaefer was quietly fired a year ago after investigations showed that he did harass his player.

Unfortunately, these are not the only cases of sexual harassment and assault at UWO.

The Oshkosh Northwestern reported that the Beitz case was one of three confirmed instances and 15 complaints of sexual harassment at UWO in the past five years.

UWO had the second-highest number of complaints in the UW System in these five years.

The University uses a search and screen process to assess a candidate’s skills, experience and education to find the most qualified people with the college dean and/or chair making the final decision.

All UWO employees have to go through a criminal background check prior to starting work at the University.

Reference checks are done through the University’s applicant tracking system in person or over the phone by a search and screen committee or hiring supervisor.

All employees are required to take Title IX training, and two weeks ago, in-person and on-campus sessions were held to further train employees on sexual harassment and assault cases.

When a student comes forward with a sexual harassment or assault complaint about a professor, the first step they take is to decide if any interim actions need to be taken.

All UW System employees must report to the Title IX Coordinator if a student comes forward with a complaint of sexual harassment or assault.

Next, they complete an investigation and remedy any findings before working to prevent a recurrence.

The director of equal opportunity, equity and affirmative action is the investigative source for cases on complaint.

In terms of learning anything from the recent Beitz case, the University refused to comment as it is a personnel matter and is an ongoing case.

UWO sophomore Jillian Heintz said she thinks a record should contain cases of sexual assault and harassment complaints because she didn’t know any details about the Beitz or Schaefer case.

“I don’t think it’s right that [Beitz] got to leave without anything on his record,” Heintz said.

UWO junior Jack Steinhoff said he also didn’t know much about the cases and that shows that there should be more communication about them.

“It’s terrible that a lot of that stuff is coming out now in the news,” Steinhoff said. “I guess it’s time that people talk about it and make it known.”

“It’s disgusting, honestly,” Gerstner said. “Why are professors doing that to students?”

UWO senior Samantha Volkman said the hiring process should require more information on applicants to prevent a case like Beitz from happening again.

“Maybe there should be better screening of professors before they hire them,” Volkman said. “Maybe get more background information on them.”

Gerster said doing several background checks and several observances of professors after being hired could be a solution.

“Get triple background checks and then after that do another background check,” Gerstner said. “After that, observe by having someone go in once a month to see how they interact with students.”

Although there are different solutions to prevent these sexual harassment and assault cases, the University needs to learn from previous cases and communicate with students on what is happening.

If a student is seeking support after being sexually assaulted, they can go to confidentail sources, including the counseling center, the Student Health Center or talk to the campus victim advocate, Ciara Hill, from Reach Counseling.