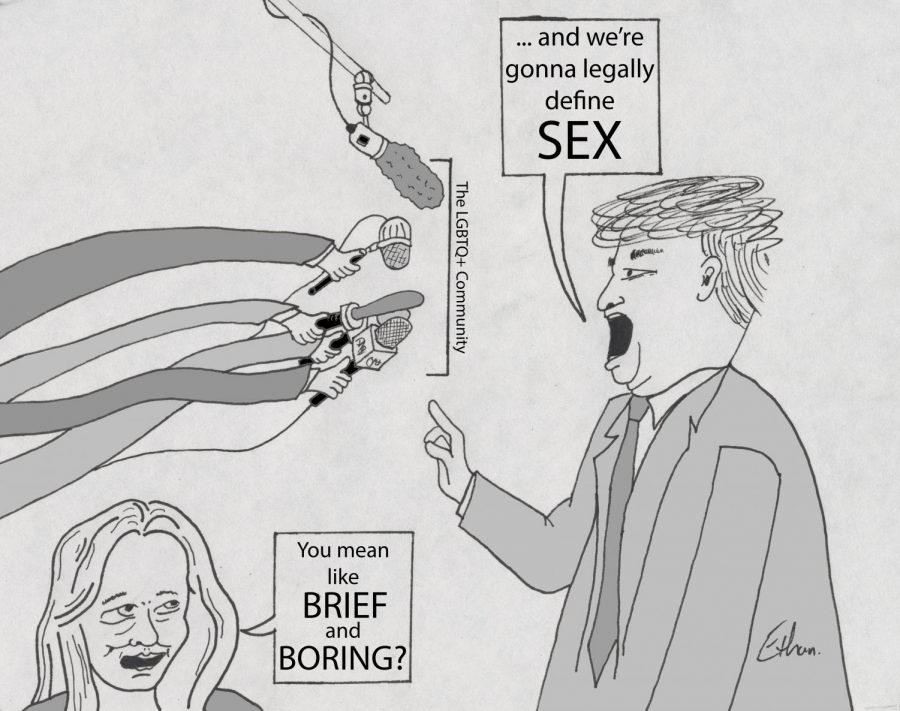 Last week the Trump administration announced a proposal to legally define gender as a “biological, immutable condition determined by genitalia at birth.”

The proposal has faced backlash from the LGBTQ+ community with rallies being held over the weekend.

There have also been several social media posts made by members of the transgender and nonbinary community using the hashtag #WontBeErased.

UW Oshkosh senior Autumn Dunsmore said she thinks the proposal restricts people’s choices to be who they want.

“I think it’s silly to have a law that defines what somebody is,” Dunsmore said. “I feel like someone should be able to choose.”

UWO junior Valerie Newhouse said the proposal would be a downfall for the transgender community.

“I do think it’s unfair because the trans people have worked hard to get where they could and then it’s all being taken away by one tiny little act,” Newhouse said.

“I would say that sex has everything to do with genetics,” Tschann said. “I think genetically what you are born with and what chromosomes you have would be a very good indicator of what your sex is.”

UWO senior Jennifer Perrault said she is mixed on the proposal because she is a biology major.

“As a biology major, I know of many conditions where a person’s external genitalia may not match their internal organs,” Perrault said. “Going on a smaller level, the presence of a Y chromosome does not always equal male and some people have XX (female) chromosomes in some cells and XY (male) chromosomes in other cells, so how should we define these people?”

On the other hand, Perrault said she thinks it would be good to define sex for medical reasons.

Director of the LGBTQ Resource Center Liz Cannon said the proposal would take away people’s right to be who they are and would make her job harder to carry out.

“My role as an LGBTQ Resource Center director is always to support people of a whole range of genders — because we have more than two — and to do everything in my power to make sure the climate at the University is understanding of how gender works and accepting of people of multiple gender expressions and gender identities,” Cannon said. “I will say that becomes more difficult if we are in a political climate that is not respectful of trans and nonbinary individuals.”

Dunsmore said the proposal might pass, but it is up to the people in this country to prevent it.

“I think it’s a possibility because people are ignorant, but I really hope not,” Dunsmore said. “Hopefully a lot of younger people go out and vote.”

Although Tschann said sex should be defined by genetics, he said he doesn’t see this proposal being passed.

“I think it would be very difficult, I don’t know if that’s where things are headed or not,” Tschann said. “It’s hard to say, but right now the way I see society, I don’t realistically see that being passed as a law.”

“I think there wouldn’t be a good reaction from especially [the transgender] community, it wouldn’t be good,” Newhouse said. “I think it could make things worse if that’s a possibility.”

UWO freshman Rachel Mackey said the proposal would garner a largely negative reaction from the country if it is passed.

“We’re getting to the point where people are more open and that’s good,” Mackey said. “People are beginning to express themselves more and I think that would go in the opposite direction.”

Tschann said if the proposal passed, we would see a lot of negative reactions based on previous laws that have passed.

“I think in the same kind of scope of things with same-sex marriage, you see a lot of pushback with that and two very opposing sides to that as well,” Tschann said. “I think you would see a similar pushback with the forming of these groups to advocate each way and kind of create more separation than unity.”

Perrault said the chances of the proposal being passed is unlikely due to election timing and beliefs of both political parties.

“Democrats feel strongly about the inclusivity of the LGBT community, as do some Republicans,” Perrault said. “Also with the midterms quickly approaching, I don’t think Republicans would want to pass a proposal like this that could make some of the population angry, and I do not see how this would benefit anyone.”

Cannon said she could see both sides but there are already people speaking out on the proposal.

“We saw the number of women who came out and marched in the women’s march across the world,” Cannon said. “We’ve already seen a lot of — over the weekend — trans and non-binary and trans allies coming together and making statements.”

Dunsmore said if a law is passed from this proposal, it could potentially lead to more laws passed of the same magnitude.

“I think if it passes it could be a bad thing because then they could find other laws to try and pass and basically be more of a parent government,” Dunsmore said. “I think this law could be the gateway if it passes.”

Perrault said that if the proposal would be passed, it wouldn’t seem very American to not recognize transgender people, and it can be hard for minds and opinions to completely change.

“Social change is slow and it is difficult to get everyone on board and step away from their traditions,” Perrault said. “While I am a conservative and have more traditional views, I think this proposal would be bad for the transgender people in America as well as the people with genetic conditions that do not allow them to just fit in a XX or XY box.”

Cannon said the best thing for students to do during this time is to educate themselves on gender before they lean towards one side.

“Increase your understanding of what gender is, and if you don’t know that you have met people who are trans and nonbinary, to recognize that you have and that gender is just a part of who we are,” Cannon said. “One of the things that we do, especially on this campus, is we embrace the whole individual.”

Cannon said being in college is the best place to learn about new things and to take the opportunity to utilize resources.

“Our purpose here is to learn and expand our minds on things that we don’t know,” Cannon said. “I would recommend that if this really is news to somebody to go to a [Students and Faculty for Equality] training, and that’s a really good way to start your journey toward understanding a variety of different genders.”

Although the outcome of this proposal is unknown, it is important to know that it is a relevant and important issue that should be discussed.