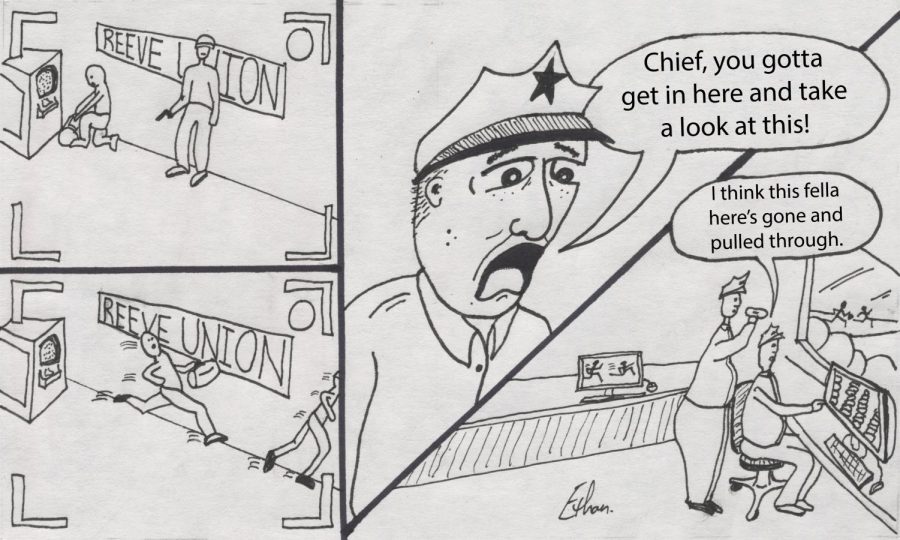 On Nov. 14, an armed robbery occurred at UW Oshkosh at Reeve Memorial Union near the UW Credit Union entrance.

University Police Chief Kurt Leibold said that the robbery was a targeted threat and not an active shooter situation.

Student responses to how the event was handled varied from being upset to understanding the campus police did what they could.

UWO sophomore Dusty Gross said she understood that the officers felt it was safe to not lock the school down, but she was worried about the suspects coming back.

“Just because it was a targeted incident doesn’t mean they couldn’t have come back,” Gross said. “I think student and faculty safety should have been put first, and it was not.”

“Sure, the officers felt that the campus wasn’t in grave danger, but what would’ve happened if the incident escalated?” Witherspoon said. “It was poorly handled and could’ve been better.”

UWO junior Ciara Trunnell said the situation, especially in communication with students, could have been handled better.

“The one thing that shocked me the most was the fact that there was such a long time in between the alerts that students got,” Trunnell said. “It would’ve been nice to have a consistent update.”

Although some students criticized the school for not going into lockdown, UWO does not have a lockdown procedure. According to Leibold, the University has a “shelter in place” procedure.

Leibold explained that a lockdown procedure would be difficult because the campus has more than one building, compared to elementary and high school buildings, and it requires a coordinated effort to lock all of them.

“Unfortunately on this campus we have over 40 buildings with all different types of locking mechanisms, so lockdown isn’t as simple as pushing a button,” Leibold said.

The shelter in place procedure would have been activated if the threat had been ongoing and would be carried out through Titan Alert. If a shelter in place message is sent out, it means that students and faculty should stay where they are and lock the door.

Upon learning about the shelter in place procedure, students agreed it is helpful, but the University should consider other factors during incidents like the robbery.

Gross said students should also be told not to come to campus if they are leaving for class and would be walking outside.

“I understand that it is a large campus, but more could have been done,” Gross said. “I personally lost participation points because I didn’t feel safe going to class.”

Trunnell said she agrees that off-campus students should be considered because people don’t think situations like this can happen until they do.

“Being a student who lives off campus, if I hadn’t checked my phone that morning I would’ve had to walk right past both Fletcher and Reeve, the main areas of the situation,” Trunnell said. “Sure, the shelter in place is helpful for students on campus, but the campus definitely needs to get a lockdown procedure in place.”

Dean of Students Art Munin said although the University does everything they can to ensure the safety of students, it is ultimately the responsibility of the student to protect themselves.

“One thing I encourage [students] to do was you’re always empowered to protect yourself in the best way possible,” Munin said. “I heard several students say, ‘Well I didn’t know if I should go to class or not.’ Well if you didn’t feel safe enough to go to class, then you’re absolutely empowered to make that decision.”

Another issue for students that arose was a rumor that Dempsey Hall went into lockdown, causing upset among students that other buildings were not on lockdown. Leibold said Dempsey was not put on lockdown but rather the cashier’s office made the independent decision to lock their doors.

Many student complaints originated from poor communication. This calls for better cooperation between the administration and students to prevent a situation like this from happening again.

One solution the administration is working on is making Titan Alert text messages opt-out rather than opt-in and encouraging students to get the UWO app.

Officer Chris Tarmann said it takes initiative to ensure all of a student’s information is put in when they are enrolled, and they are close to achieving that but the mobile app is beneficial as well.

“If you have the app downloaded you’re going to get those notifications regardless, which is really nice,” Tarmann said. “I’m not trying to say that to say, ‘Don’t sign up for Titan Alert,’ because that’s definitely the key; it’s because the app is geofenced to our area.”

UP is also in the works of refining their safety classes to include more than active shooter training.

“So when I talk about us refining the training, we’re going to add in some other stuff,” Tarmann said. “We’re going to talk about, ‘Hey, it’s not always going to be an active shooter. Here’s a couple other things you should be thinking about in the moment of a serious situation.’”

UP is also working with UW Madison to create an active shooter video that will be released soon as well as refining the emergency guide.

Although the University is working on making improvements based on feedback and similar events, students also have ideas for improvement.

“Professors should be talking about more issues that we have on campus,” Gross said. “Attempted robbery, especially armed, needs to be taken way more seriously.”

Trunnell said education is the best way to ensure that everyone knows what to do in serious situations like the armed robbery and to have timely alerts.

“Educate the University population on situations like this,” Trunnell said. “Hold active shooter trainings, bystander training, etc. It’s better to be informed than to be uninformed.”

Witherspoon said she doesn’t have a specific solution but whichever solution is created, it should help both students and administration for any potential future serious situations.

“Come up with a solution that’ll help benefit the students and administrative staff so we don’t have disagreements and angry people over situations like this,” Witherspoon said. “This armed robbery attempt angered parents of students who were out of state, because like stated before, what if the suspects took it more seriously and went to other places other than Reeve and opened fire on students? It would be a disaster.”

If the administration listens to what students have suggested, they can take the necessary steps to improve or implement procedures to prevent any future upsets during serious situations.

Despite there not being one tell-all solution to solve any miscommunication and misunderstanding, it is important that both students and administration work together to improve both of them.