With only about 5 percent of UWO students reporting sexual assaults, administrators must take action to encourage survivors to come forward 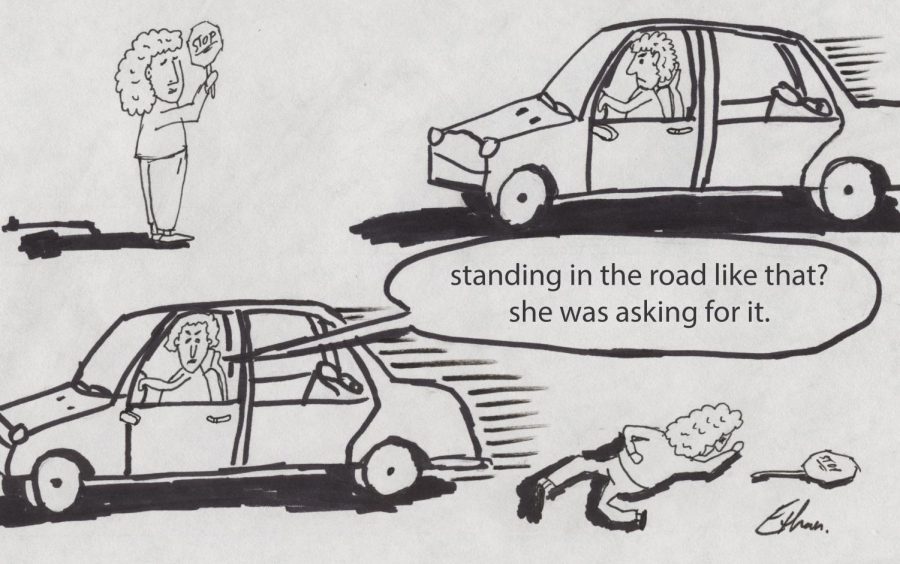 The violent and degrading act of sexual assault leaves a victim feeling ashamed, traumatized, and often, too scared to report the assault.

Those who do report are left with the possibility that their rapist may receive no repercussions for their actions.

“They feel like no one hears them. No one supports them. No one believes them,” Campus Victim Advocate Ciara Hill said. “The possibility of nothing happening is definitely real and what a lot of victims feel.”

Sadly, the lack of reporting sexual assaults is all too common on college campuses across the United States. At UW Oshkosh, administrators need to be proactive in protecting victims and empowering the survivors of sexual violence to come forward.

According to the UWO website, there were 57 cases of sexual assault reported to the Campus Victim Advocate in 2016.

Hill said she is unsure how accurate the website number is as it may include sexual assaults that were reported by phone or by a secondary source.

With only about one out of every 20 sexual assault victims on campus reporting, UWO officials needs to stop talking about how they’re addressing sexual assaults on campus and actively take action to not only decrease the amount of sexual assaults that are occurring, but also to encourage those who have been assaulted to report.

The stigma attached to sexual assault often makes victims feel too embarrassed and ashamed to come forward. Hill said survivors live with the fear that no one will believe them, and those that do will think the assault was their fault. She said they are worried about getting pregnant or STDs or if they were drugged.

“They have guilt. They blame themselves,” she said. “They feel all of these emotions: sad, mad, angry.”

“They don’t even know what emotions to feel because they were incapacitated at the time so they’re trying to understand,” she said. “And then there is the fear of the unknown. What do I do now? What happens next? Who do I contact? Which of my family or friends can I trust enough to tell this to?”

Some survivors also self-blame and worry that people will look at them differently.

“They are scared that their voices aren’t going to be heard,” Hill said. “They are worried that they won’t be taken seriously and they will be labeled by these horrible things that people say.”

These thoughts are exacerbated by the inappropriate questions that victims are often asked, typically leaving the survivor to feel that their own actions caused the assault.

“What were you wearing?” they ask.

“How much did you have to drink?”

But sexual assault is never the victim’s fault.

Kahrs, who is currently overseeing sexual and interpersonal violence prevention efforts at UWO, said some victims have been groomed or coerced and they don’t realize what happened to them constitutes sexual assault.

“Sometimes it’s fear of retaliation, whether from the person they’re accusing, or from their friends,” Kahr said. “Another fear, when people don’t report, is that they don’t think people will believe them.”

Hill said there is a huge misconception about who rapists are.

All of the self-doubt and fear that survivors feel is overshadowed by another concern: What if you’re brave enough to report your sexual assault, but the perpetrator of the sexual violence is never brought to justice?

Accused rapist gets a clean record

In a 2011 case, a UWO student reported to officials that she had been raped while intoxicated, court documents indicate.

University officials found the victim to be credible and brought off-campus non-academic misconduct charges against the student-athlete who was being accused, according to documents.

These charges would have resulted in a one-year suspension and would have permanently prevented the student-athlete from ever obtaining a teaching license from the state of Wisconsin.

UWO officials held misconduct proceedings and ultimately found that it was proven by a “preponderance of evidence” that the student-athlete had engaged in sexual assault, court records say.

However, the student-athlete argued in district court that several procedural violations in UWO’s misconduct proceedings led to violations of his due process.

The accused rapist later went on to become a high school athletic coach.

It’s cases like this that frustrate victims and discourage them from reporting.

In 2016 Wisconsin passed a Medical Amnesty law. This law ensures that anyone who has been sexually assaulted or anyone who reports a sexual assault cannot be charged for underage drinking. The bill was passed to encourage sexual assault survivors to report.

In relation to this law, UWO has a policy to only impose educational sanctions, rather than disciplinary sanctions, on students violating the UWO alcohol policy when reporting a sexual assault as a victim or witness.

However, giving assault victims a “get out of jail free” card is hardly an incentive to report such a devastating incident. Plus, a sexual assault victim is traumatized and isn’t necessarily thinking clearly about making decisions based on the law.

And, if drugs were involved, the victim has even more repercussions to fear, as UWO’s medical amnesty law only covers alcohol.

Kahrs said there are many resources on campus to address and report sexual assault, and she is working to simplify the reporting process on UWO’s website so that it’s even easier for victims to report.

“You’ll never be completely over it,” she said. “It’s something you will always remember. No matter how many years go by.”

Kahrs said UWO has joined with 40 other schools in an initiative called “Culture of Respect” to develop, assess and implement improvement plans on campus to combat sexual violence.

UWO has created a new sexual and interpersonal violence prevention coordinator position on campus, with the new coordinator starting on March 18.

The campus is also gearing up for a wide range of activities for Sexual Assault Awareness Month in April.

Kahrs said if someone you know has been sexually assaulted you should listen to them.
“Tell them you believe them, it’s not their fault and you are there for them,” she said.

Hill said she wants victims to know they are not alone.

“There is someone here that is going to be there for you, who will listen to you and respect you and believe you,” she said. “We’ll make sure that you have what you need to move on. We just want you to feel safe and protected on campus and in the community.”

What else can UWO do?

If UWO officials truly want to encourage survivors to come forward, then they need to be more proactive, not only in preventing sexual violence on campus, but also in addressing how sexual crimes are prosecuted on campus as well as combating the stigmas attached to sexual violence.

Victims do not want to report a crime if they believe the perpetrator is going to get an academic “slap on the wrist” as punishment. Or worse yet, the perpetrator may not receive any punishments at all while the victim has to live with the shame and stigma.

Hiring a new sexual and interpersonal violence prevention coordinator is a great way to bring new ideas to UWO to combat sexual violence, but it isn’t enough.

Providing support and resources to survivors of sexual violence is an important and necessary step to addressing campus sexual assaults, but it’s also not enough.

Even dedicating the entire month of April to sexual assault awareness isn’t enough.