UWO students call for action: ‘We will be heard’ 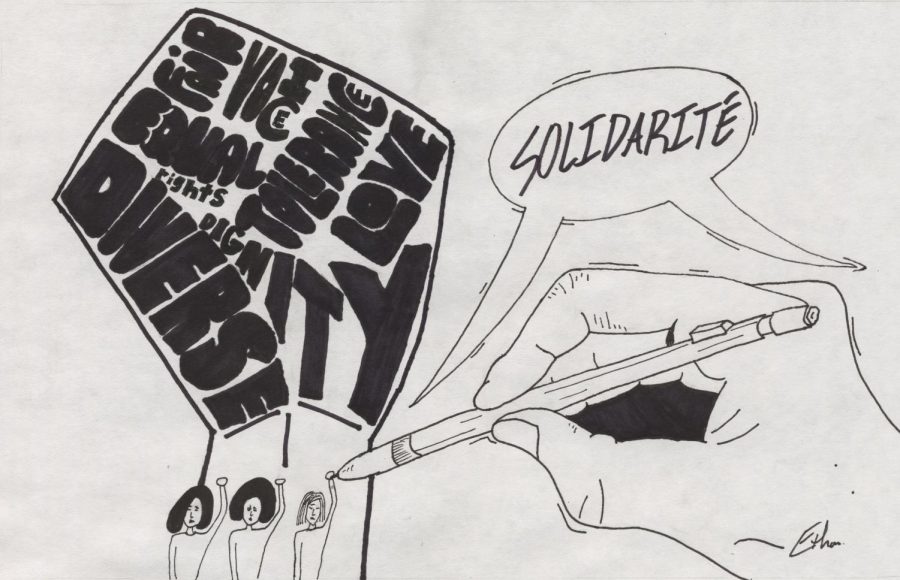 In a series of testimonials that finished with a call for action, a diverse group of UW Oshkosh students and faculty members attended a forum Monday to address ongoing discrimination and harassment on campus after a student made a racist and homophobic Snapchat post during the Oshkosh Student Association elections.

Although campus administrators said they are trying to address issues of homophobia and racism at UWO, they said there is a fine line between free speech and censorship.

However, many students feel what the University is doing isn’t nearly enough.

“I can’t even hold my girlfriend’s hand when we’re walking on campus,” UWO student Ivanna Kovalenko said at Mondays “Call for Action” forum.

“My fellow trans and nonbinary students regularly come to me and tell me about transphobia, discrimination, sexual assault, rocks being thrown at them by strangers, by students, and I am sick and tired of hearing about things happening to my friends,” UWO student Burgundy Johnson said.

“To know that some people may not like me because of my race or ethnicity or gender or sexual orientation, I’m deterred from that. We really need to fix this,” UWO student Cassie Xiong said.

This racist and homophobic snap targeting three of the candidates left many students on campus wondering what leads people to harass and discriminate against others and whether Banfield and McDonald should step down from the OSA elections due to the controversy surrounding the snap.

“I knew that there were people on our campus that think this way,” Pa Houa Xiong said. “But I didn’t think it would happen during the elections. It was very unexpected and took us by surprise.”

Obermeier said she was unhappy that the University has not punished the student who posted the snap.

“I can get fired for my sexuality in over 20 states in America. My name is now linked to this,” Obermeier said. “Knowing that, I don’t understand why I am not equally protected, but someone who makes homophobic or racist remarks is.”

“It wasn’t just the three of us that were hurt by this,” she said. “This is the entire LGBTQ+ community on campus, this is the Hmong community and not only that but any marginalized group.”

Campus administrators have not said if the student who posted the snap will face repercussions. But in an email sent the day after the forum, Chancellor Andrew Leavitt addressed the free speech issues that the University faces when handling this situation.

Assistant professor of political science, Jerry Thomas, said UWO needs to stop giving attention to the racist and homophobic snap and instead focus on embracing the qualities that diverse students are being attacked for.

“I would love to see the campus come together and pull all of its resources together and come up with something incredibly provocative where we take a statement like this and pull it back and empower us and have the first regional ‘Hmong fag’ bash on campus,” Thomas said. “Let’s take it and celebrate, and let’s change the culture.”

The four students who organized the forum developed a list of demands for the University that includes holding the individual who posted the snap accountable, being transparent in the reporting of bias incidents on campus, increasing diversity of faculty, the chancellor’s cabinet and higher level administrators and mandatory education for students, staff and administrators to create a more inclusive environment.

Let’s face it, we have been shouting at the administration to take action for far too long. Due to the recent University budget crises, it’s likely the University lacks the resources and staff to adequately address discrimination, sexism, racism and homophobia on campus and it’s time for UWO students to take the matter into their own hands.

Instead of holding a campus forum only when these issues of harassment and discrimination occur, let’s hold a monthly open forum and demand that Leavitt and higher-level administrators listen to our concerns and are held accountable for the follow-through on their promises.

This is not a time to be silent. Students also need to consider the importance of standing up to those who disparage and harass others. As scary as it is, the change starts with us.

Some students have said that if Banfield and McDonald win the OSA elections, they need to consider resigning the candidacy to show support and solidarity for the many students and faculty members who were affected by the snap. At the very least, whoever wins the election needs to work closely with minority and majority students alike to bring an end to these issues.

Not only do we have to combat bigotry on campus, we also need to address our own unconscious bias. Several minority students at the forum pointed out the importance of majority students attending diverse events on campus, no matter how uncomfortable it makes them feel.

If there is one thing you take from your experience as a UWO student, it should be an exposure to new and different ideas and an acceptance of everyone, no matter race, gender or sexual orientation.

Although the OSA election results have not come out yet, the four organizers of the forum say they no longer care who wins the election because the negative snap has led to an awareness of larger issues on campus that they are now in a position to confront.

Obermeier, Johnson, Alina Xiong and Pa Houa Xiong deserve to be honored for their bravery in standing up to put an end to discrimination on campus to ensure that diverse voices are being heard. UWO staff member Boyd Featherston, who spoke at the forum, said it best.

“When you stand up and you think nobody’s behind you, even if just one person in the room heard you, there’s affirmation,” he said. “The more that people stand up and speak, the more you whittle away the foundation of their racism, their bigotry, their hatred. Because when it’s exposed to daylight, it withers.”