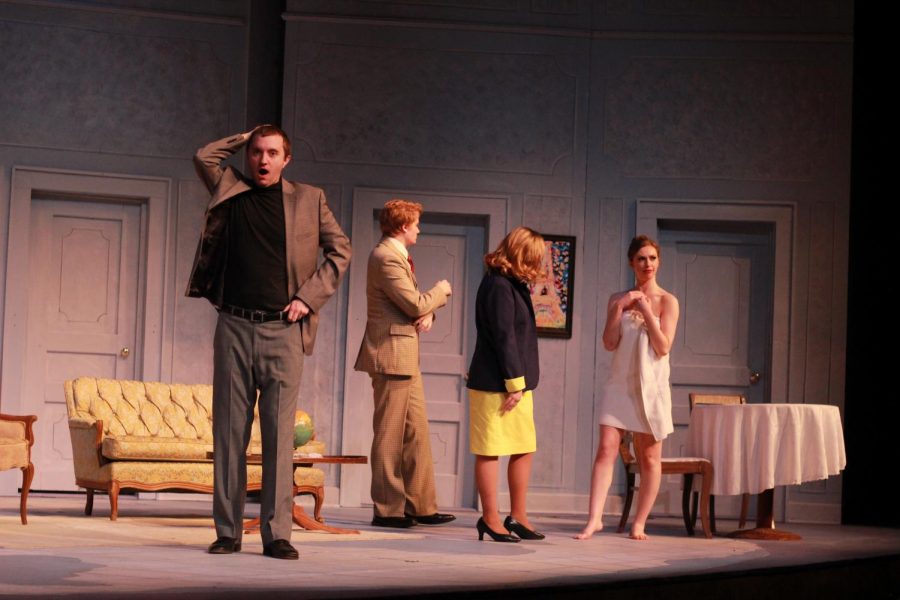 Bernard, Robert and two stewardesses fill the stage of Fredric March Theatre with their comedic personas.

“Boeing Boeing,” a play about as bouncy and playful as the title itself, takes place in Paris in the 1960s, following a bachelor named Bernard (Robert Reeves), who has found a way to juggle three airline hostess fiancées from around the world by using an airline time table to ensure they never find out about each other.

This plan gives Bernard what he calls “international romantic bliss.” That is, until, airlines begin using newer, faster Boeing planes that foist his plans.

“Boeing” really began to pick up speed upon the introduction of the character Robert, Bernard’s friend from Wisconsin who ends up doing most of the juggling. Robert is played charismatically by Garret Johnson, helping make the play reminiscent of early screwball comedies starring Cary Grant.

Comedy ensued as Bernard’s three stewardess fiancées begin coming in and out of the show, each from a different airline and country.

As all three of the fiancées names begin with the letter “G,” and they’re all blonde. It became a bit confusing at times as to who was who. Admittedly, that was probably the point. Thankfully, each of them wore different colors from their given airlines to help tell them apart.

Of the three fiancées, Autumn Christensen gave the strongest performance as the playful and bossy Italian Gabriella. Aside from Johnson, she seemed to be the one having the most fun in her role.

The play’s “sneaky device,” as director Richard Kalinoski put it in the show’s program, was Berthe, Bernard’s housekeeper who has just about had it with Bernard’s schemes.

Kalinoski said the playwright “inserts [Berthe] who oversees the shenanigans with a skewed smile informed by mordant exasperation. All, of course, in jest.”

Berthe was played by Mary Margaret Clementi, serving as the comic relief well among a cast of comic reliefs.

Accents are rarely attempted (or attempted well) in college performances, but in “Boeing,” accents are helpful in fueling comedy and keeping each character distinct. Unfortunately, most actors in this production weaved in and out of their accents throughout the show.

Clementi’s French accent and Christensen’s Italian accent may not have been perfectly on point, but they were the strongest and most consistent throughout Thursday night’s show. Reeves’ French accent was so faint that it was unclear whether or not Bernard was meant to even have an accent.

Thankfully, the inconsistent accents didn’t take away from the flow of the show. The second act in particular increased in hilarity as the three stewardesses kept moving in and out of the scene.

Though the audience erupted in laughter every time someone said the word “Wisconsin” (even when it wasn’t meant to be funny), most of the humor in the show came from Johnson as Robert as he desperately tried helping his friend juggle his three fiancées. The contrast between each of the stewardesses’ personalities inspired a lot of laughter as well.

Especially with Oshkosh’s EAA AirVenture in the summer, “Boeing Boeing” was a perfect choice to close UWO’s spring.