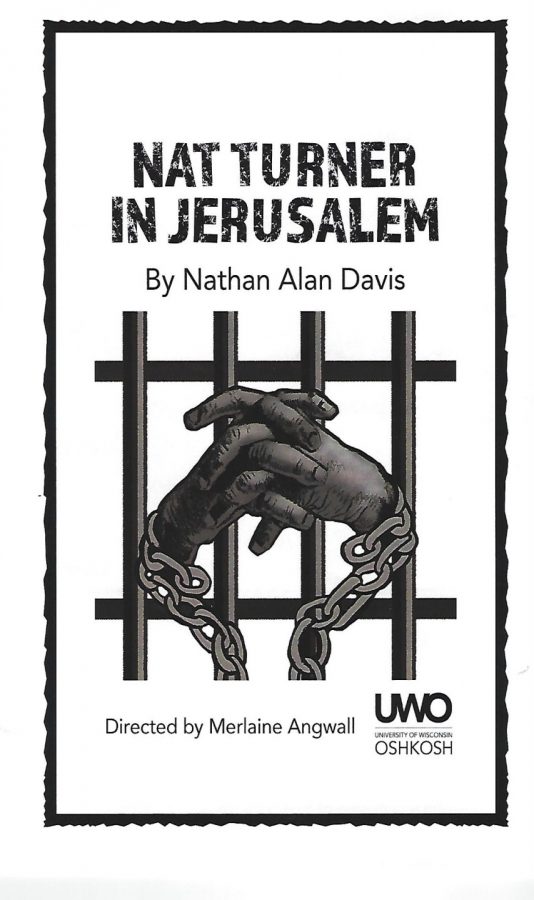 Poster for "Nat Turner in Jerusalem"

The UW Oshkosh theatre department debuted the first college performance of the 2016 one act play written by Nathan Alan Davis, “Nat Turner in Jerusalem,” last week, providing a profound and challenging experience for its audience.

Davis, who spoke on campus about his play last week, wrote the play to tell the true story of Nat Turner, a slave-turned-rebellion leader who was sentenced to death for the murder of 50-60 white men, women and children in retaliation against the murders against his own kind. Turner believed he was on a mission from God in search of “holy vengeance.”

“Nat Turner in Jerusalem” takes place at Turner’s jail cell in 1831 Jerusalem, Virginia, during Turner’s final night as he self-reflects and confesses his story to his attorney, Thomas Gray, who happens to be a slave-owning atheist with a tragic past.

The lines between good and evil are blurred in “Nat Turner in Jerusalem.” Both Turner and Gray seem justified in their awful actions. Gray is himself a member of the group that oppressed Turner, and Turner is a victim of even worse atrocities than the ones he committed.

This challenging play of morality and religious deconstruction was even more of a challenge to direct. Merlaine Angwall directed the play’s themes of racism, religion and morality effortlessly.

The stage was set with a minimalist aesthetic. The jail cell jutted out so far upstage that it went over the first few rows of seats, making for an intimate and three-dimensional experience.

The lighting of the stage really set the intimate tone of the production as well, at first shining the faint orange glow of a sunset through the jail cell window. Most of the play’s key moments were used as cues for some beautiful dramatic lighting choices.

The jail cell walls were as simple as they could be, breaking apart into sections to really let the scenes breathe. Only the bare essentials were present in the construction of the set, putting all the emphasis on the story and performances.

Barefoot and in chains, Bryan Carter, a senior, gave an incredibly powerful and honest performance as Nat Turner. His ability to listen during the course of the show brought his character to life in a brutal way. Carter gave Turner an eloquent and generally calm demeanor, making the revelation of his atrocities incredibly shocking to the audience.

Parker Sweeney, a senior, gave Thomas Gray a relatable personality. He isn’t simply the racist villain the audience roots against. Sweeney’s charm, despite his intimidatingly tall statue over Carter, made him a uniquely relatable character.

Carter, Sweeney and senior Garret Johnson as the prison guard all played off each other so naturally that, from the beginning of the play, it was clear these three characters had a complex relationship that started far before the show began.

Since this was the first college production of “Nat Turner in Jerusalem,” the playwright was in close contact with Angwall. The pressure was on — and it really paid off.

UWO’s production of “Nat Turner in Jerusalem” brought to light modern issues of racial injustice in an honest, yet nuanced way with this true story that brought some audience members to tears.

There is still a chance to see UWO’s production of “Nat Turner in Jerusalem.” The understudy cast will be performing at the UW Oshkosh-Fond du Lac Campus at the Prairie Theatre Oct. 10-12.