Up in smoke: Vaping should be taken seriously 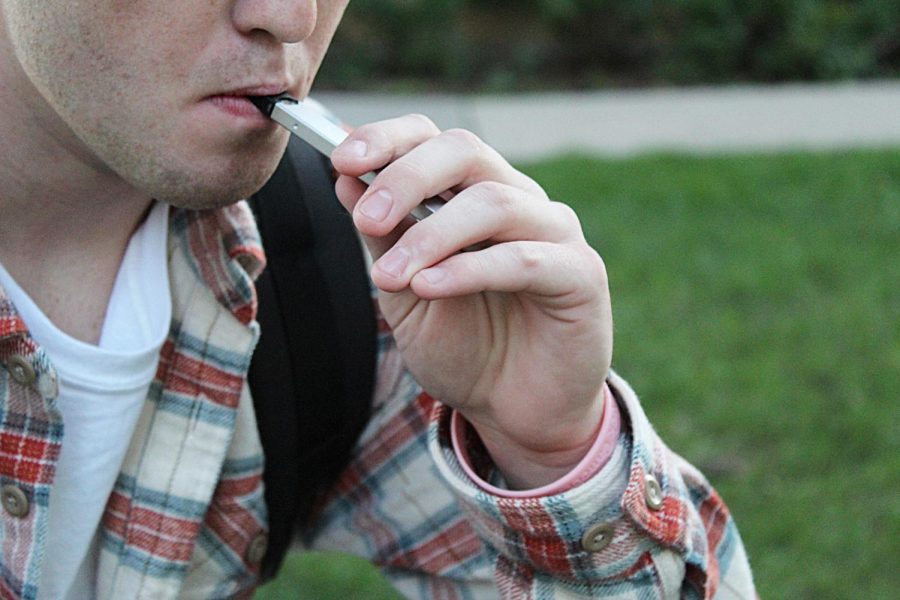 A UWO student takes a drag on a Juul e-cigarette while walking to campus.

On campus it’s almost impossible to walk anywhere and not see someone vaping or juuling — it’s become a normalized daily activity for many college students.

When I first came to UW Oshkosh, I had no experience with vaping or what it really was, and a lot of the people I surrounded myself with didn’t either.

Throughout my college years, vaping became more known and used by my classmates and dormmates. It became a normal thing for people to plug in their Juul at night and not just their phone for a charge.

I believe e-cigarettes are only used because society feels it’s “cool” or “better than cigarettes” when truly it’s not. You are still putting harsh chemicals into your system regardless of what the product name is.

People are given all the information they need to understand why it’s not good for them, yet they continue to juul.

According to Johns Hopkins Medicine, vaping “raises your blood pressure and spikes your adrenaline, which increases your heart rate and the likelihood of having a heart attack.”

Not only does vaping increase users’ likelihood of having a heart attack, but they start to feel dependent on it as addiction spikes from constant use, and it becomes harder and harder to break with continual use of vaping and e-cigarettes.

Although I conformed to society and tried vaping, I hated it from the start. It hurt my lungs and made me feel weird. I didn’t want to rely on something like that for a sense of stability.

When vaping first came around, it was talked about as a “healthy alternative” to cigarettes that could still give people the same high a cigarette would.

It spiraled into controversy as some believed it was unhealthy and others were blind-sided by long-term side effects. Everyone should know it is unhealthy. And no, it’s not healthier than cigarettes.

According to the Truth Initiative, every Juul pod is equivalent to smoking 20 cigarettes worth of nicotine. That alone should be a clear indicator that these habits are horrible for your body.

I interviewed students at UWO (all of whom asked to stay anonymous) who either vape sometimes or never have. I asked their opinions on vaping and how it affects not only their lives, but the people around them.

“Vaping serves no purpose [other] than trying to fit in with mainstream society,” a junior who has never vaped said.

They also expressed that they were never pressured into using it because the majority of their social group didn’t vape either.

A senior at UWO who sometimes vapes expressed how they only did because everyone around them was doing it. They felt pressure from their social group to do it, but felt it was “normal” or “cool” to vape.

“Everyone is doing it, so I should too,” a senior who occasionally vapes said.

The majority of students who vaped started in their high school years when it first rose to popularity. They all explained how they didn’t have health problems in mind when starting out, but as more information came out about it, they slowly began to retreat from usage.

“The more I found out about it and what it can do to you, it just disgusted me, and I wanted nothing to do with it ever again,” a senior said.

Each interviewee who occasionally vaped expressed how they came to know it was bad for them but chose to do it anyway to fit in with society and be normal. They expressed how in high school, popularity matters and you have to do certain things to be a part of the group.

“It’s just a fancy cigarette in a new shiny packaging,” a senior said. “It contains different chemicals, but ideally the outcome is still the same — not good.”