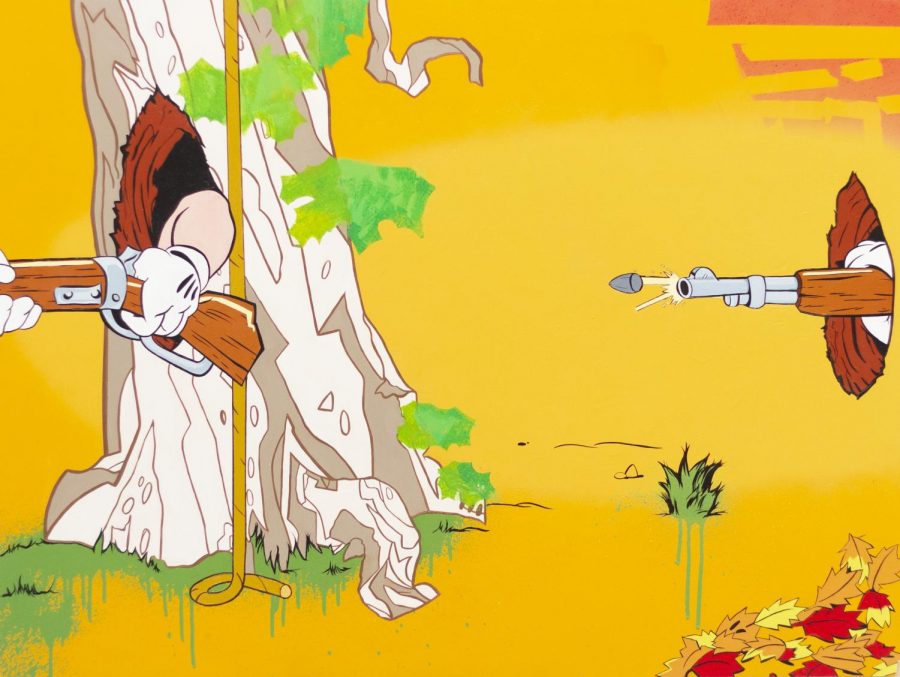 A piece titled "Background Checks" on display in the exhibition.

One week ago the Allen Priebe Art Gallery welcomed artist Brooke Grucella to campus for the opening of her exhibition titled “Repeat After Me,” a series focusing heavily on pop culture images and classic cartoon imagery to represent our modern society.

Grucella said she never had the opportunity to experience art museums or galleries despite growing up in Southern California. Her parents and the school system she grew up with never had much of a focus on the arts, but Grucella was influenced artistically through visits to landmarks such as the Griffith Observatory, the La Brea Tar Pits and graffiti in the Los Angeles River.

“A lot of the other stuff that influenced me was cartoons, graphics from candy wrappers, punk music, Garbage Pail Kids and skateboard graphics,” Grucella said. “I grew up in a family that was full of skateboarders and surfers, so that sort of subculture was inherent in my both my lifestyle and then later in my work.”

These playful and accessible styles that were ever present in Grucella’s life led to her developing a taste for countercultural styles, popular cultural interests and youth-driven movements.

“I naturally gravitate toward artists who work with subject matter accessible to larger groups of people who may or may not have backgrounds in arts,” Grucella said. “So I sort of developed this boundary between traditional fine art and new brow, ‘low brow’ art, graffiti art and street art.”

Grucella described how the controversial interior album art from Guns N’ Roses “Appetite for Destruction,” by the artist Robert Williams, was one of the first images that bridged the artistic gap she was seeking.

“I loved it because it felt like it was a little bit more relatable in terms of the cartoons and comic books that I was already tracing and drawing, and I knew that he was a painter,” Grucella said. “I knew he was painting these things and I knew that it wasn’t just that sort of lower level as we sort of look at comic books.”

Later, Grucella became more interested with subculture artistic styles emerging in Southern California in the ‘60s and ‘70s. She grew fascinated with the art form that arguably subverts the mainstream more than any other: graffiti.

“For me, the interesting thing there is that there’s no class distinction with graffiti artists; they sort of work autonomously,” Grucella said. “They work toward each other. Lower class, middle class, upper class all can participate in this; race and ethnicity have no drive in that, and regionality is sort of obliterated not only by the cross-country trains, but also by the internet.”

Many of Grucella’s works prior to “Repeat After Me” include text on top of and layered within the imagery, and graffiti lettering styles had a large impact on her own style’s development.

“I’m not a graffiti artist, but I do like words and the shape of letters, and that’s sort of where the beginning of my practice started,” Grucella said.

After some time, Grucella began to feel like the portraiture and lettering she had been doing was becoming too formulaic, so she began to shift gears toward where her work is now.

“I started playing around with overlaying, collaging, skateboard graphics, comic book images and abstracted shapes,” Grucella said. “I wanted to look at the grotesque and the sort of absurdity in comics and animation and look back even further to the 1930s and ‘40s and seeing how that sort of climate that’s happening in the ‘30s and ‘40s in these sorts of animations are playing out in our contemporary sociopolitical society.”

Grucella noted how much of her work toys with the way a viewer’s perception of cartoons such as “Looney Toons” or “Tom and Jerry” changes as they grow older and see their darker.

“The level of propaganda that was in the cartoons was quite interesting to me when it was channeled through a child’s eyes,” Grucella said.

Her current works featured in “Repeat After Me” have recognizable and relatable imagery stylistically similar to animations in cartoons, although many of her paintings are more abstract and compositionally complex, often including many layers of detail.

“I felt like the works were successful in that they play with ambiguity, delight and disgust, which I wanted to keep working with, but expand to a different topic,” Grucella said of the exhibition. “I like the symbolic nature of taking objects that were somewhat recognizable and preparing them and placing them in such a way that it both reflected the source material’s history, but also how it relates to our current climate.”

Grucella’s “Repeat After Me” will be on display at the Allen Priebe Art Gallery through Nov. 26.