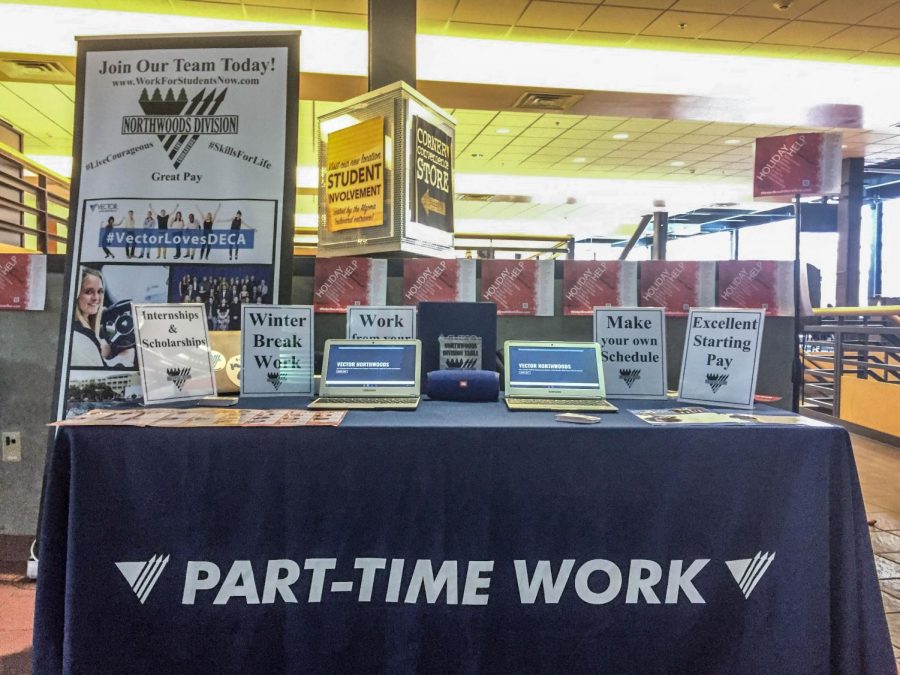 “If you’ve walked through Reeve Memorial Union or Blackhawk Commons during your stay at UW Oshkosh, you’ve probably come across one of Vector Marketing’s recruitment tables. The table often has vague and alluring messages like “part-time work,” “excellent starting pay” and “make your own schedule.”

Vector Marketing Corporation is a subsidiary of Cutco Corporation, which makes high-quality kitchen knives to be sold at demonstrations put on by employees for a 10% cut.

Vector has been under a lot of pressure over the years. The second suggestion Google makes after typing “Vector Marketing” is “scam.” Many accuse Vector of being either a pyramid scheme or a multi-level marketing scam.

A Google search for “Vector Marketing scam” has 9,290 results. Hundreds of testimonies can be found online from previous employees voicing issues with Vector’s vague job descriptions and questionable business practices. Many note how the company makes its employees sell “overpriced” knives to friends and family members, sometimes ruining those relationships or making them awkward.

Most of the positive claims about Vector come from current employees. Vector’s own website has a dedicated page about the company’s scam claims. It’s not a good look.

The company has also had a number of lawsuits filed against it, mostly pertaining to labor laws. In 1994, Vector was temporarily forced to stop recruiting in Wisconsin due to deceptive recruiting practices.

Jason Heinritz, division manager at Vector Northwoods, the regional Vector Marketing division, said that from what he’s heard, the details of the Wisconsin lawsuit are a misconception. He said that a newspaper manager confessed it was their fault that they falsely advertised that Vector would pay $12.05 per hour instead of per appointment.

However, according to an article in the Washington Post in 1996, the deceptive advertising in question was in the form of mailed flyers, roadside signs and phone calls — not a newspaper ad.

“[Wisconsin consumer protection investigators] found several years ago that workers in the state earned less than $3 a day on average selling cutlery for Vector, a company that relies solely on independent contractors as salespeople,” The Washington Post said.

These claims and unfortunate history aside, I’m willing to give Vector Marketing and Heinritz the benefit of the doubt. After all, each division of Vector Marketing is operated differently, so it’s not necessarily fair to paint the company with a broad brush.

The defenses Vector has in response to scam claims on its website are fair and accurate. The company is technically not a pyramid scheme or a multi-level marketing scam. It doesn’t require employees to buy their own kits or recruit other employees.

But because Vector does rely on its employees to work at their own rate selling knives, it can certainly appear as a scam to many people introduced to the job for the first time.

Heinritz said Vector’s negative stigma comes from a misunderstanding of what a pyramid scheme is.
“A lot of people confuse the job with a pyramid scheme because of the shape of it, which is every job ever out there,” he said.

While this is a common response by people actually running a pyramid scheme, Heinritz is right in this case. Vector employees do not make their money from recruiting people under them, a definite feature of a pyramid scheme.

“You know how many people finish college? Less than half. So is college a scam?” Heinritz said. “I don’t believe college is a scam, but I know one summer with Vector was way more valuable than the $50,000 and five years I spent at Whitewater.”

Though I don’t think Vector is technically or legally a scam, the company certainly appears as one due to the nature of how it operates. I think the real problem lies in the company’s vague marketing and a misunderstanding of what the job entails.

I personally applied for a job at Vector Marketing in Oshkosh about nine years ago. I remember a strange and long interview process. It wasn’t until my second interview where I learned that I would be selling knives to friends and family.

The hiring manager seemed excited and eager to hire me, assuring me that I would make a lot of money. I left the interview happy, but I had a strange feeling in my gut. After I Googled the company as soon as I got home, I was convinced it was a scam and avoided their calls.

Heinritz said the reason for the vague marketing is because no one would be interested in the job if they knew it was about selling knives, but he said that once sought after employees are introduced to the nature of the job, they get excited about the knives.

According to Heinritz, employees are asked to come up with a list of friends and family (50-100) to do a product demonstration with (70% end with a sale). They’re guaranteed $17 per demonstration (usually 45 minutes) and make a 10% commission on each sale (up to 30%), the average of which is $350. Employees make their own appointments and are not paid for training or transportation. They’re also told to ask their clients to name 5-10 people they know who might be interested in buying the knives.

“I worked really hard, busted my butt, made over $100,000 selling Cutco throughout college,” Heinritz said. “Graduated debt-free. Loved it. And now I’m the manager.”

If this claim is true, and if Heinritz followed the job description he gave, he would have had to make the average sale of $350 (with a 10% commission) at 28,571 appointments. I’m not saying he’s lying, just that he would have to be an exceptional and ambitious salesman, which he seems to be.
So where does the truth lie? Is Vector Marketing a scam, luring students with high promises, or is it a legitimate business opportunity for students willing to do the work? I believe the answer is somewhere in between.

The most telling thing for me was when I asked Heinritz, “Why knives?” He seemed confused by the question, almost to say “What difference does it make?”

To me, that’s like saying, “I’m not interested in selling knives. I’m interested in selling a
product.” That tells me his primary goal is to make money, not to sell a product he’s naturally passionate about. There’s nothing wrong with that mentality, but it’s certainly not a mentality that everyone can inhibit.
I think Vector Marketing is, in fact, a lucrative business opportunity for a certain kind of person. Goal-oriented, A-type, business-minded, “Wolf of Wall Street”-type individuals who want to be an entrepreneur driven by money will likely enjoy working for Vector and make a lot of money.

Heinritz agrees that the job works best with people who are disciplined, thick-skinned, hard-working and willing to challenge themselves. He said he wishes other people would understand this truth.

“With everything online, everyone putting their opinion on social media, why not get information from someone that actually has experience and someone that you want to be?” Heinritz said. “I’m not going to talk to a fat, lazy friend about how to be healthy because they’re going to give me an opinion on what diet doesn’t work.”
Heinritz also wrote a book, “Conquer the Post-College Passion-Slump,” where he writes about the “mediocre majority.” Listening briefly to the audiobook, he talks about a Tony Robbins event he attended.

I personally think Tony Robbins is a self-help guru bullshitter who scams people out of their money, but his advice falls in line with people like Heinritz and those who would benefit from working at Vector Marketing. It’s not an inherently wrong lifestyle, but it’s definitely not for everyone.

My only wish for Vector Marketing is that they would be more transparent to the students they scout for jobs, especially since they’re so aggressive with their marketing on campus. I think it’s a bit shady not to be upfront about the specific job requirements.

Letting students know upfront that the job may not be for them could reduce the company’s negative stigma.
Jamie Page-Stadler, director of Career and Professional Development at UWO stands by Heinritz and his leadership with Vector Marketing.

“He is an exceptional leader, Page-Stadler said. “He is a great professional that really has the best interest of students at heart, and I will tell you that Vector is not the experience for all students. … If we ever have a student who did an internship or had a position that was concerning, we limit what that organization is able to do until they’ve proven themselves again, and we haven’t had that with Vector.”

As for the knives, Paige-Stadler stands by those as well.

“It’s awesome!” She said. “But you’ve got to be careful. You can cut the tip of your finger off.”