Disney enlists in the streaming war 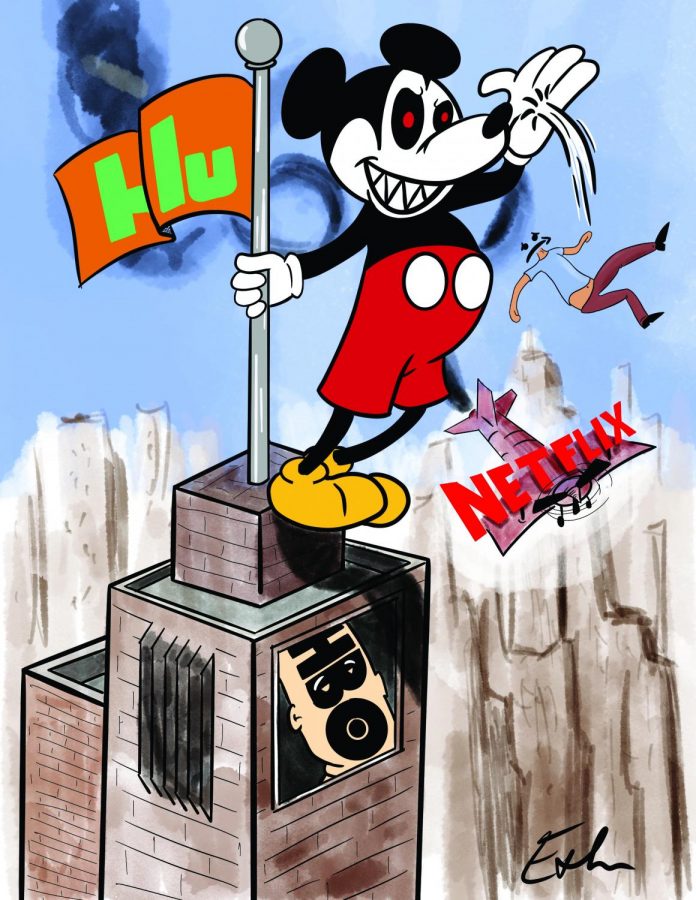 Disney enlists in the streaming war.

“With the long-awaited launch of Disney+ last week Tuesday, as well as the premiere of Apple TV+ occurring earlier in the month, it seems like the options for streaming services are becoming endless.

With so many options to choose from, it would seem that the so-called “streaming wars” are truly upon us.
Among the combatants in this battle for your viewership are the newcomers like Disney+ and Apple TV+, mainstays such as Netflix, Amazon Prime Video and Hulu, and future services like HBO Max.

With so many services entering the fray, the chances are that the movies or shows you want to watch are all in one spot are getting ever slimmer.

You want to catch up on “Stranger Things?” Well, it looks like you’ll have to keep your Netflix subscription. You feel like watching some Marvel movies? Better get Disney+ loaded up. After all of that you still feel like binge-watching “The Office” in its entirety for the eighth time? Looks like you are going to need a subscription to Peacock, NBCUniversal/Comcast’s upcoming streaming service after “The Office” parts ways with Netflix.

With all of this content being spread out, keeping up with your favorite movies and shows is quickly becoming a very costly habit. Even so, the price of subscribing to multiple services in order to watch a variety of content still remains a much better deal than most current cable packages.

Most basic cable packages cost around $90/month, which is significantly more than the cost of your average streaming service, which usually costs around $10/month (depending on if you want ads or not).

The catch here is that to utilize any streaming service, you need an internet connection. Most cable packages come bundled with internet as well, so if you are adamant on ditching cable, you will have to get internet separate. Depending on where you live, this can cost you around $60/month, which leaves you room to subscribe to multiple streaming services and still pay less than you would have otherwise.
After all is said and done, what service is likely to come out ahead?

As of right now, Netflix remains dominant in terms of subscribers, boasting a massive 158 million, but its position atop the hill is currently under fire. The introduction of Disney+ not only threatens Netflix in terms of being a cheaper alternative ($6.99/month for Disney+ compared to $12.99/month for Netflix’s most popular plan), but for every new service that is introduced, it seems that Netflix loses more and more from its library.

Fan favorites such as “Friends,” “The Office” and most of the Marvel/Disney catalogue will all seemingly be finding new homes in the next two years with the emergence of new services.

For me, it’s hard to see a future in which Disney+ does not come out on top. Not only does it boast a library featuring some of the most popular properties in the world (Marvel and Star Wars, namely), but it also promises a large slate of original content, with original series like “The Mandalorian” and “High School Musical: The Musical: The Series” already out and much more planned for the future.
What do the other services have going for them?

Netflix, besides having an already immense viewer base, also offers a lot of original movies and shows, which should help soften the blow of losing some of its most popular content in the coming years.
Apple TV+ has the advantage of being easily accessible to the numerous amounts of Apple device owners, but the fact that it launched with only nine programs and no library of past content seems to put it at a serious disadvantage.

Amazon Prime Video has a similar advantage, as it is accessible to everyone who pays for Amazon Prime, but also boasts a large library of older content and has produced award winning originals such as “The Marvelous Mrs. Maisel” in recent years.

Comcast’s future service Peacock will have “The Office” as well as “Parks and Recreation.” Enough said.
Ten years ago, the notion of “cord-cutting” was very much in its infancy, with only a few alternatives to cable being available, but now, as more and more streaming services enter the market, people seem more eager than ever to go all in on online viewing.

But as the number of services keeps increasing with more companies looking to capitalize on this trend and the content becomes increasingly spread out, concerns may start to arise as consumers realize how much they really have to pay in order to access all the shows and movies they want across the multitude of platforms that will be available.