Will a woman ever be president? 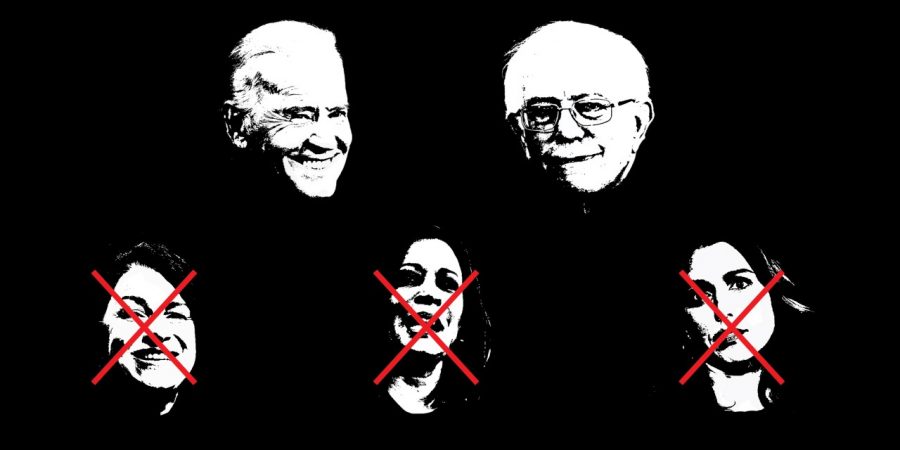 With the results of Super Tuesday causing Elizabeth Warren to suspend her presidential campaign, two men are left as the Democratic front-runners. Now the question is raised: will the United States ever have a female president?

The 2020 presidential election cycle started off with six strong women candidates, with a few looking to actually have a considerable shot at the Democratic nomination.

Warren, Amy Klobuchar, Kamala Harris, Kirsten Gillibrand, Marianne Williamson and Tulsi Gabbard presented a historic number of women vying for the presidency and giving hope to some that one may become our first female president.

Gabbard is still running her campaign but she will not be the president of the United States. She won’t even be the Democratic nominee unless a miracle happens for her.

There will not be a female president this time around, and if anyone is looking for a woman to enter the Oval Office, they’ll have to wait another four years if not many, many more.

This election also included the largest number of women to get into the Democratic debates, exemplifying the huge progress women are making in presidential races.

Prior to this election cycle, only two women had made it onto the televised presidential debates, Hillary Clinton in the 2008 and 2016 presidential election and Carly Fiorina in the 2016 election.

But Warren’s decision to drop out of the presidential race has shown that America still has a long wait before a woman is head of state.

Warren started off her campaign with a lot of promise, ranking high in national polls and raising millions in campaign funds, but she and the other women in the field slowly left the race.

What began as a diverse field of Democratic candidates has now reverted to the familiar race between two white men that we’ve seen almost every year before.

Plenty of women have been elected to other political positions in the country. Elected officials in federal, state and local governments still maintain a male majority, but there are far more women in other areas of politics than there has been in the presidency.

While Clinton may have outperformed Donald Trump in the 2016 election by winning the popular vote, that wasn’t enough to win her the presidency with Trump’s victory in the electoral college.

Even with Trump’s blatantly expressed sexism during his campaign, he was still chosen over a woman.

It’s almost impossible to weigh all contributing factors to understand why a woman has never won the US presidency, but our country’s deep-rooted misogyny has always prevented women from getting leadership roles and continues to keep women away from some of the most powerful roles there are.

Sexist arguments have kept women out of positions of power, with people citing perceived hormonal instability and lack of strength and intelligence as reasons for women to stay out of the White House.

However, the loss of a female Democratic nomination this year didn’t solely come down to sexism. Warren and the other female candidates didn’t run perfect campaigns, and Joe Biden and Bernie Sanders already had a significant advantage from name recognition alone.

That being said, sexism still played a role in the election because parts of America still don’t view women as electable in presidential races.

With over two decades of political experience, Warren was just as qualified to become the president as her male running mates.

Warren gave her campaign far greater enthusiasm than the somewhat accurately dubbed “sleepy” Biden, and even though Sanders suffered a heart attack earlier in the race, he is still perceived by many to be a better candidate than Warren.

When asked about how gender affected the race after her announcement to drop out, Warren said, “If you say, ‘yeah there was sexism in this race’ everyone says ‘whiner.’ And if you say ‘no, there was no sexism’ about a bazillion women think, ‘what planet do you live on?’”

With the prevalent sexism in this country, could America even handle a woman as head of state?

It was only a few months prior to the 2016 Presidential Election that the huge controversy over having female Ghostbusters erupted.

If parts of this country couldn’t even handle fictional female leaders, how would they have handled one in the Oval Office?

I’m not optimistic that a woman will win the US presidency in my lifetime.

Women still face significant criticism and barriers of entry for leadership roles, and it seems that the most powerful position in the world will remain in the hands of men for years and years to come.

Even as more and more women get closer to the presidency, it appears that it will be a long time before any of them actually get to take it.

Back when Klobuchar was still in the race, she responded to a question about a woman’s lack of electability in the 2020 presidential race by simply saying, “may the best woman win.”

That won’t be happening this year, but hopefully someday one will.