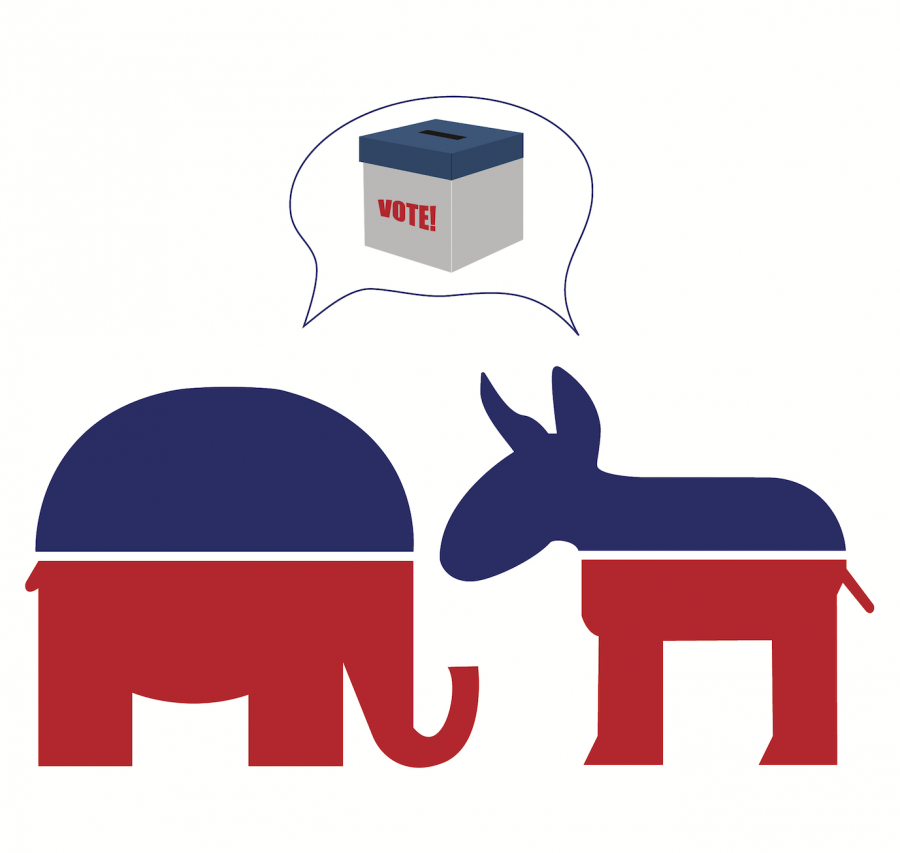 With the Wisconsin primary right around the corner, College Republicans member Ethan Watt and College Democrats members Tyler Lewis and Alicia Obermeier responded to questions about voter turnout, electability and the coronavirus’ impact in the 2020 election.

What issues are you most concerned about going into the primaries?

Watt (R): The issues I am most concerned with going into the primaries are the Second Amendment, abortion and socialism.

The Second Amendment gives us the right to protect ourselves and our families. The idea that gun control and gun-free zones will stop mass shootings and violence is incorrect. Many people want to ban guns such as the AR-15 and AK-47, claiming they are “assault weapons.” They see these on the news when mass shootings are committed and think these are weapons of war just based off looks and what they have done. In 2018, handguns killed over 6,000 people whereas rifles killed 297. People seem to think that rifles kill more people just based off the media coverage they get. Politicians like Joe Biden claim that rifles are harder to shoot, when they are in fact the better choice for women and disabled people in times of self-defense since they are much easier to aim and control. Gun control would take the guns out of the hands of law-abiding citizens. Criminals who have guns are not going to give them up as they aren’t obeying the law as is.

Next, I do not believe that socialism will ever work. One of the reasons socialism will always fail is the fact that it distorts prices. Market prices in free enterprise help guide economic activity. Most of the time the collapse of socialism is due, in part, to these artificial prices. Controlled prices are always too high or too low, which then results in constant surpluses and shortages. Market prices are the only way to communicate information that creates incentives to ensure economic efficiency.

Another reason why socialism will never work is the fact that it ignores private property rights. Under socialist rule, property is collectively owned by individuals in that society. Private property encourages you to be more conservative with your property and to use it responsibly. Public property does the exact opposite.

Tyler Lewis (D): The two biggest issues that I focus on when looking for a candidate would be LGBTQ rights and environmental sustainability.

LGBTQ rights hold a dear place in my heart, as a large portion of my family is in that group. Along with this, some of my friends are also in this group and I hear a lot about how hard it is for them to feel unaccepted by society.

Environmental sustainability is something that is important to me because, without our environment, we have nothing. With it slowly deteriorating, it worries me how my great-grandchildren will live without the necessary resources of life.

Obermeier (D): Women’s rights: my body, my choice. Equal pay and paid leave after having a child for both mothers and fathers. Abortion is health care. Corruption in the government, it’s supposed to protect the people, not their own pockets. Environment: we’re running out of time in this global crisis. War and foreign involvement: we need to stay in our lane and only help those who ask for our assistance. Oil wars are greedy and there are better options.

Higher minimum wage: no one can live off of our minimum wage right now. Medicare for all: we are the only developed country without it. I make too much for BadgerCare and not enough for Obamacare; that’s a broken system. Hold Wall Street accountable, banks work for the people, not the other way around. LGBTQ+ rights: don’t fire someone because of how they look or love. It’s 2020, why is this still a debate? Mass incarceration is a racist and broken system.

Gun control: Stop allowing the NRA to kill our children. Why is this still a debate? Separation of church and state: believe what you want but don’t force others. Religion does not equal a reason to discriminate. Immigration: We are a country made of immigrants. Fix the foster care system, enough said. Police are trash and need to be held accountable, give them racial bias testing, make them learn about those with disabilities, mental illnesses, etc.

You cannot shoot someone because of their skin color. Childcare through university should be free or, at least, affordable.

Overall, our system is broken. Government works for the people, not their pockets.

Which Democratic candidate do you think poses the greatest threat against Trump?

Watt (R): I feel that Bernie Sanders poses the greatest threat against Trump. He has a fired up and energetic base that would turn out to polls if he was nominated. As of right now though, it seems he won’t be able to get a nomination.

Lewis (D): I would biasly put Sanders for the candidate to beat Trump. He focuses a lot on equality and wanting to help people from all walks of life. Furthermore, he wants to help young people, the people who will run this country soon.

Obermeier (D): Bernie Sanders. He’s consistent, works hard and doesn’t give up fighting. He knows what he cares about and fought to get this far.

Are you more concerned about where the candidates align on the issues or their electability?

Lewis (D): Sanders aligns with my concerned issues well, but it seems to be that Joe Biden will be the one in the democratic seat. My issue is I don’t support Trump, but I don’t want Biden to represent our country. He is getting quite old and I’ve seen a lot of footage where he just trails off from a topic into something that doesn’t make any sense. Quite frankly it makes less sense than some of the things I’ve seen Donald Trump tweet.

The youth vote turnout has consistently remained low, with voters aged 18-29 only accounting for less than 15% of the vote in most states. Why do you think young voters and especially college students aren’t motivated to go to the polls?

Watt (R): I believe that voter turnout has remained low for young voters has stayed low due to time. We as college students are very busy. Whether that being due to class, studying, work, extracurriculars or hanging out with friends and relaxing. We as college students and young people have a lot on our plates and want whatever free time we have to relax.

Lewis (D): We are busy with school that we paid an arm and a leg to attend. Students feel that their vote won’t matter. Most importantly I think that students feel that the candidates don’t have our best interests in mind, and the ones that do don’t make it as far as the others.

What do you think it would take to get the youth people to care more about voting?

Watt (R): I think as young people we are very passionate about what we want our future to look like, so we need to take a step back and make time to vote for who we want.

Lewis (D): To get students to go out and vote, there needs to be something that will impact their group personally. If nothing greatly impacts college students, they don’t have the spare time or energy to go out of their way and vote for something that they feel won’t impact them.

Obermeier (D): Make it personal to them; many have privilege and don’t care unless it affects them directly.

Do you think the novel coronavirus outbreaks and instructions to socially distance ourselves will have an effect on our voting process and presidential campaigns?

Watt (R): I think the coronavirus will have somewhat of an effect on the elections. Many cities are pushing people to sign up for absentee ballots, which I have already done and sent in. The biggest thing is that people find out how they can vote in this election, and make sure they do.

Lewis (D): I believe it will and already has had an impact. The media can be a great way to instill panic into people who don’t have the time or resources to properly look into the pandemic.

Obermeier (D): Elderly people will not be as likely to show up to the polls. However, people are bored and forced to learn a little more about these issues right now which may create positive change.

How do you think the pandemic will shape people’s perception of the candidates, including Trump?

Watt (R): This is an unprecedented time for politicians as many of them haven’t seen something like this in their lifetime. I think people will see that Trump is trying his best to deal with this outbreak.

Lewis (D): Trump will get some backlash as he did fire the group of people who are trained to deal with events like this.

What issues do you think the candidates should be focusing on during the pandemic?

Watt (R): I think that health care will be a big topic in the aftermath of this outbreak. Many people will call for universal healthcare which would not be the answer. I believe that this issue of the coronavirus needs to be a bipartisan effort. Politicians need to work together to find solutions. The American people, whether they’re a Democrat or a Republican, need to work together to help each other through this crisis.

Lewis (D): Candidates should be focusing on ways to help the lower middle-class families. At the end of the day we can’t just kill off the virus with a snap of the fingers, but people are suffering greatly due to a loss of income, and ability to access necessary public buildings and resources.