It’s time to put an end to racial violence 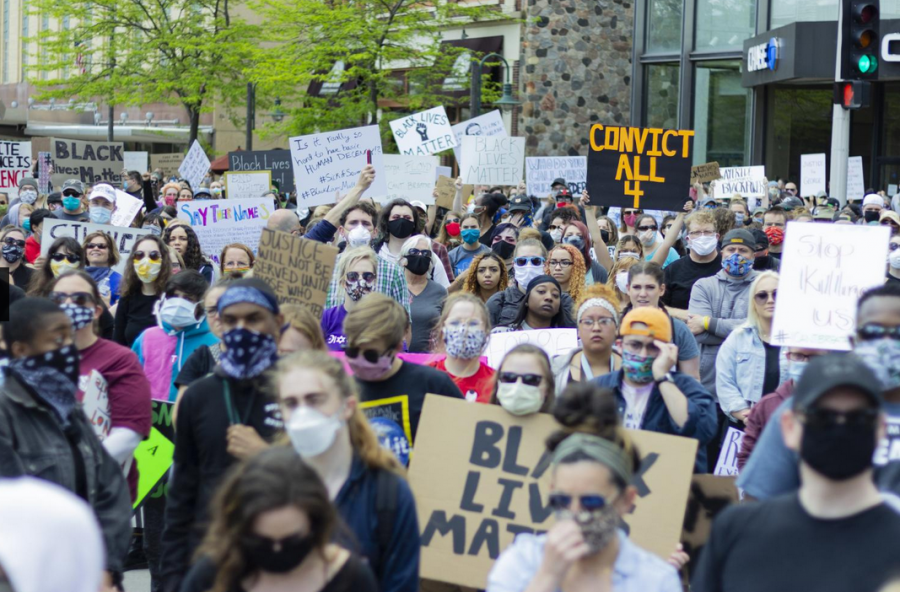 Photo by Carter Uslabar - A peaceful protest in Appleton

A firestorm has erupted across the nation and the world as protesters have taken to the streets to demand justice for the death of George Floyd and increased police accountability.

The spark that ignited in Minneapolis as Floyd pled for his life while a white officer kneeled onto his neck for nearly nine minutes has spread to millions of people who are expressing their outrage over the continual violence and oppression against African Americans perpetrated by our nation’s culture of white supremacy.

Floyd is only the latest high-profile case of an African American dying at the hands of police enforcement. The same thing happened to Breonna Taylor at her home in Louisiana, to Michael Brown in Ferguson, to Tamir Rice in Cleveland, to Eric Garner in New York City and to countless others.

Their deaths are tragic and live as a horrifying example of the anti-black policing in this country.

The hatred and bias towards black Americans did not end with the emancipation of slaves or with the passage of the Civil Rights Act, it is an institution that is alive and thriving in America today.

“As a nation, we cannot continue to be socially tone deaf and ignore blatant issues that continue to rear their ugly head and plague our black communities,” said UWO Interim Associate Vice Chancellor for Academic Support of Inclusive Excellence Byron Adams.

Adams said people need to educate themselves on the cultures, histories and traditions of minorities to help solve the systemic problems they face.

“For white students to show support to their black peers, true education on black and African American history, politics and culture are essential for real progress and equity for all,” he said.

What happened to George Floyd is not a solitary incident of police misconduct. Instead, it is emblematic of a greater, much deeper issue of systematic racism in our country that oppresses black people and views them as enemies.

Black Americans are nearly three times more likely to die from police than white Americans, according to data of police killings compiled by Mapping Police Violence.

Death of African Americans by police officers and white vigilantes is an all-too-familiar occurrence in our country.

Now protesters are out in large crowds risking contracting the coronavirus because they realize that the marginalization of African Americans and racialized terror committed in the United States is a pandemic of its own.

The frustrations expressed by the protesters right now are over-spoken and their demands are long overdue.

This country cannot continue to ignore the racism that is standing in front of us.

While these protests will eventually die down, more like them will continue to emerge until real structural change is implemented in our police forces and throughout our country.

Adams said voting for leaders that promote diversity and holding local and state officials accountable for racial justice is a start toward fostering change in our communities.

Adams also suggested people organize and participate in community events that discuss matters of equity and diversity with their law enforcement and community members.

“These are just the basics of what a community should have to make sure everyone has a voice and that everyone’s needs and rights are being met,” he said.

Adams said the battles we are currently witnessing on TV and social media spread to every inch of the country.

“There is a systemic problem in this country of racism and profiling no matter where you go,” he said.

Adams said these issues are not unique and we are seeing the same thing in Oshkosh.

“I fear until our nation as a whole can fix itself, communities and institutions like Oshkosh will continue to face bigotry, racism and intolerance of and toward African Americans and people of color in general,” Adams said.

We need to put an end to racial violence and increase police accountability, so that we may bring justice to people like George Floyd.

And we must start to recognize and take responsibility for the racism in our country and in ourselves because enough is enough and black lives matter.