Reflecting on the legacy of RBG 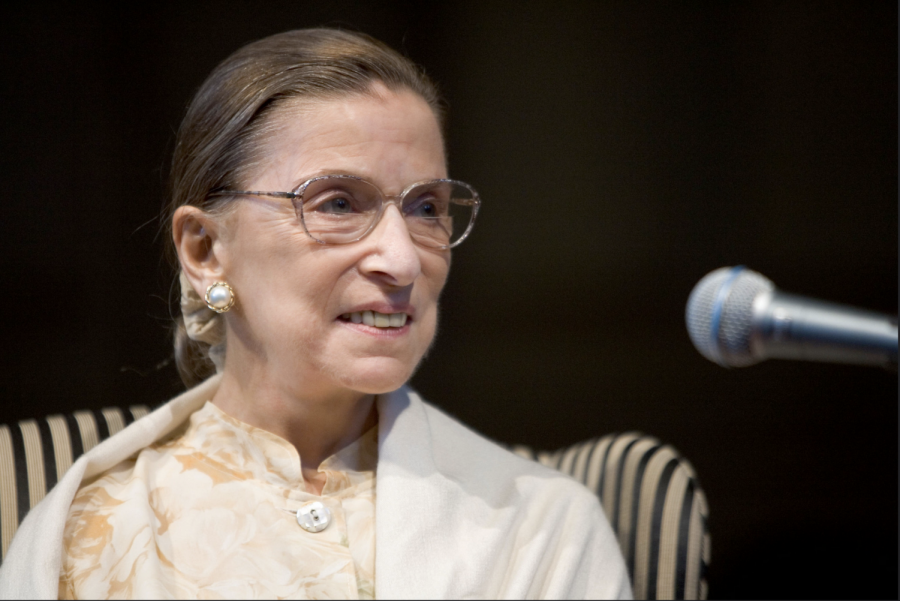 The History Club co-hosted a discussion of RGB’s on Sept. 29, 11 days after her death, to discuss her legacy.

The guest speakers, professors at UWO as well as representatives from the Women’s Center, Political Science Student Association and American Democracy Project, all seemed to have very strong opinions about who she was and what she did.

Professor Harris of the History Department started off the discussion by saying that RBG is/was at the very forefront of gender equality struggles. She then went into a brief discussion of how Bader-Ginsburg got into that side of politics by saying that she was discriminated against in law school and even had a hard time getting a job as a lawyer after graduating, despite being at the top of her class.

Once she got a job as a professor, she was asked by her students to teach a sex discrimination class in relation to politics, something that wasn’t really ever done yet.

Harris also said that before she was on the Supreme Court, Bader Ginsburg looked for cases that the all male courts could relate to; looking at situations in which males were discriminated against or very obvious cases in which women were discriminated against. Obviously she knew what she was doing, trying to make it as simple as possible for the white male judges to understand her.

This also clearly worked for people to see her because in 1993, President Clinton saw her and nominated her to the Supreme Court of the United States.

RBG made decisions both in the majority and in the dissenting opinion. One of her most important majority decisions was in “U.S. vs. Virginia” in which she wrote the majority opinion of the 7-1 case that decided not allowing females into the Virginia Military Institute went against the 14th Amendment. It 100% did violate the equal protection clause and the one dissenting opinion of Justice Scalia was, to put it simply, wrong.

While she did have other crucial majority opinions, many of her notable cases are of her dissenting. Ruth Bader Ginsburg said that “Dissents speak to a future age. It’s not simply to say, ‘My colleagues are wrong and I would do it this way.’ But the greatest dissents do become court opinions and gradually over time their views become the dominant view. So that’s the dissenter’s hope: that they are writing not for today, but for tomorrow.”

She got her nickname of ‘the Dissenter” during Bush vs. Gore in which she believed there needed to be a recount; it was during this decision that she said her most famous line “I dissent” instead of the typical “I respectfully dissent.” I think that a recount should’ve been done to get the most accurate decision possible and would’ve dissented with her.

Arguably her most eminent dissenting opinion was in 2013 during Shelby County vs. Holder that allowed ignoring of a part of the Voting Rights Act. Bader Ginsburg said “Throwing out preclearance when it has worked and is continuing to work to stop discriminatory changes is like throwing away your umbrella in a rainstorm because you are not getting wet.” This voting rights issue was important as was her opinion on it because she believed it would lead to discrimmination in voting which it definitely would’ve!

For most college students, RBG was a judge on the Supreme Court since before we were born and because of her feminist opinions and some of the decisions previously discussed, we saw her as liberal.

However, Harris and Dr. Grady, Associate Vice Chancellor of Academic Support of Inclusive Excellence, both said that she was actually more moderate during her time on SCOTUS. Dr. Grady argued that while RBG did have some decisions that didn’t always impact her life in the most positive way as a person of color because of her moderate voting, but she did still do good for her as a woman.

While it may be true that she is more moderate, I believe that us seeing her as liberal is correct because of how far right and conservative the Supreme Court has become in recent years.

Speaking of becoming more conservative, an important thing to note as a seat opens up on the court is the fact that we could have a 6-3 majority if President Trump gets his nomination, Amy Coney Barrett, through.

If this happens, we’re screwed.

Reproductive rights is an issue RBG fought for, specifically forced sterilization, and when she spoke about it in the Senate, only three people voted against her because of her knowledge and compelling argument. If Trump was in the Senate, he would’ve probably been one of those three because one of his campaign promises is to limit reproductive rights and access to facilities like Planned Parenthood.

With a conservative majority, many of those rights would be gone. Dr. Alicia Johnson of the Women’s Center says that if reproductive rights do get revoked, abortion in many places, including Wisconsin, would be criminalized.

I don’t think that nine people should get to choose this and honestly, it shouldn’t even be a discussion for people to have an opinion of what others get to do with their body.

Another reason we’re screwed if Barrett gets through is because she is tied to People of Praise. Dr. Harris was also concerned about this and briefly described People of Praise as those who have the idea that the wife follows the husband and they pledge to live by the doctrine of what’s essentially a cult. It is 2020 so I really don’t think we need someone on the highest court in the country who thinks wives should follow their husbands and dutifully listen to them.

Decisions and how they are related to the laws we already have in place all depend on the judiciaries ability to interpret them. If President Trump is able to get his nomination through, voting rights, reproductive choice, the second amendment, and health care may be able to be interpreted in a way that does NOT do the most good for the most people.

Trump and other leaders should accommodate Ruth Bader Ginsburg’s dying wish of not being replaced until after the election is over.

While I think this discussion was important to remember Justice Bader Ginsburg, I think we should’ve taken more time to see the implications of her death and the future of our country without her vital opinion, no matter if it’s moderate or liberal. I’m hoping the History Club will host a new meeting soon about this issue of a vacant seat as well as how it may impact presidential campaigns.

While we wait for that meeting, make sure you’re registered to vote (check www.vote.org or myvote.wi.gov) and request an absentee ballot if you don’t plan on going out to the polls on Election Day. It is the most important election that most of us have ever voted in.