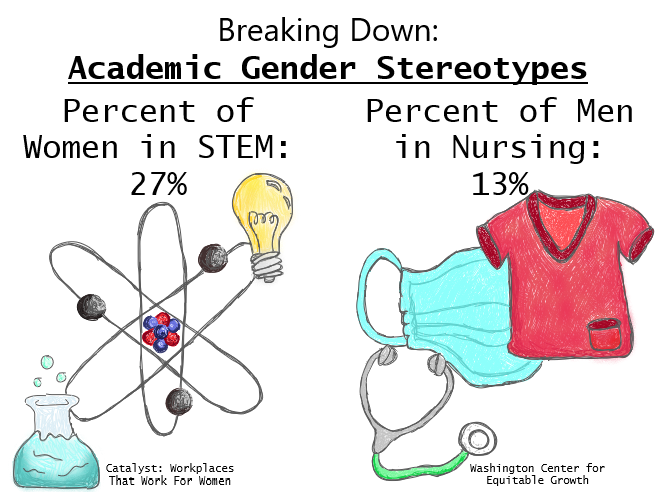 Long-standing stereotypes have existed for college students and what majors and jobs they chose to go into, but even as gender barriers are being broken gradually with time, stereotypes are still holding strong.

As seemingly hard as it sounds for a male or female to go into a field of study where they are the minority faced with difficulties, individuals are breaking stereotypes.

Milwaukee School of Engineering (MSOE) freshman, Gillian Spuhler, is majoring in mechanical engineering with a minor in mathematics.

“Many people tend to be impressed and mention the impressiveness of a female going into an engineering field,” Spuhler said.

The Royal Society of Chemistry states that of all scientists who have made game-changing advances throughout history, women account for less than 7% of the total. When the study was repeated for scientists born since 1900, almost 20% are women.

According to bestcolleges.org, old Western culture essentially excluded women from most professions seen as masculine.

As impressive as it is for a woman to be in the STEM field, women have faced a history of misogynistic harassment, which is still moderately present today.

“Most of the guys [at MSOE] are super nice and considerate, but there’s the few that feel the need to domineer assignments and projects, and in doing so will tell you that you’re wrong just so they get credit or leadership for the assignments or projects,” Spuhler said.

Even though Spuhler is facing hardship, she enjoys exploring her major and working on things like toys and games, cars and medical equipment that will genuinely impact someone’s life.

There is some good news for women looking to go into the STEM field, though, because in national randomized experiments and validation studies conducted at 371 colleges nationwide by Proceedings of the National Academy of Sciences, there is a 2:1 preference for women on the STEM tenure track by employers.

As well as women going into the STEM field, men are also crossing over stereotypes and going into nursing.

Former UW Oshkosh student, Darren Kieffer, who is transferring to UW-Steven’s Point in the fall, is majoring in nursing.

“A couple older guys that I work with have given me weird responses [for majoring in nursing],” Kieffer said. “I’ve [also] gotten a lot of positive reactions and overwhelming support from plenty of other people as well.”

According to the Washington Center for Equitable Growth, only 13% of nurses in the United States are men, but that number has grown steadily since 1960, when only 2% of nurses were men.

As stated earlier, women are seen as more caregiving and better suited to be nurses, so seeing males in the field is often seen as surprising.

Figures from Income Data Services reveal that male nurses earn slightly more than their female colleagues and that gap has widened in the last four years. Men are also more likely to take on senior positions and are disproportionately represented at higher levels.

Even as clear benefits are expressed for men working as nurses, blatant discrimination has been showed to them as well. A male working specifically in maternity or health-visiting placements is typically frowned upon.

There will always be benefits and difficulties in every field of employment, but difficulties should never outweigh the benefits.

“Right now as a CNA, I find the job very fulfilling,” Kieffer said. “My dream is to travel, so pursuing a fulfilling career as a nurse allows me to do that.”

Students are surely breaking gender-related stereotypes of majors they go into, but the rates of females entering STEM and males entering nursing are still extremely low.