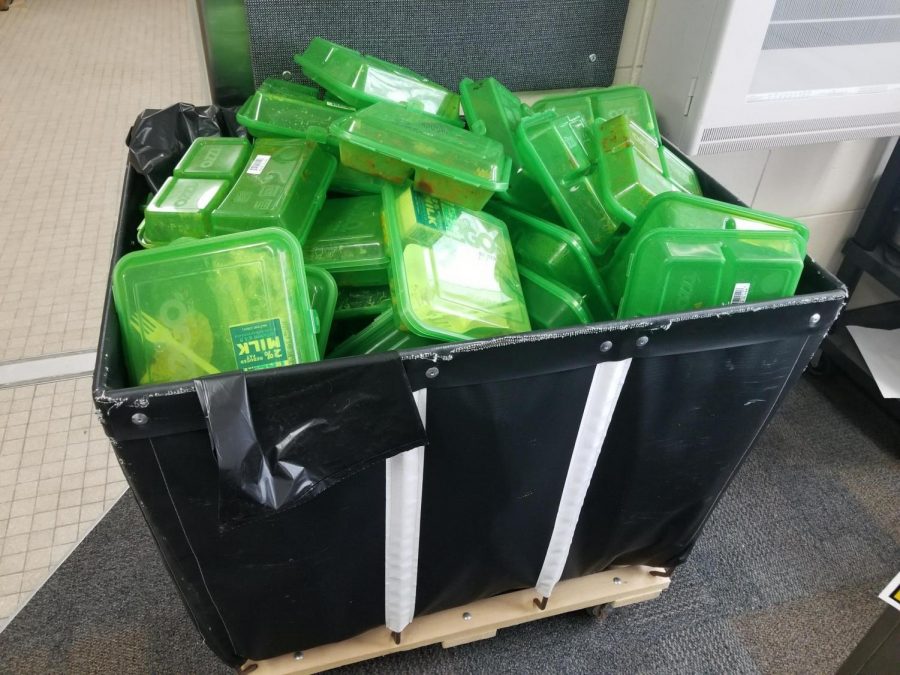 Katie Pulvermacher / Advance-Titan Since Blackhawk Commons started using trays as part of the univerisity’s COVID-19 protocols, some residence halls have utilized carts for students to drop off their trays. Stewart is not one of them

At the start of the fall 2020 semester, plates in Blackhawk Commons were replaced with reusable green to-go containers. While these containers are beneficial and convenient, issues have arisen, and they are not pleasant.

Whenever I leave or return to my dorm in Stewart Hall, whether going to or from a class or grabbing some food on campus, I get a big whiff of rotten food in the front lobby.

Stewart does not have a designated cart for used containers, yet at one point in the past couple weeks, someone placed a used container in one of the rolling carts intended for moving students’ belongings out of their room for COVID-19 reasons or a room change.

After one student placed their container in the cart, others followed along, and this week, the pile has grown monstrously high and the smell of rotting food is repulsive.
Sophomore Kya Young works as a residence hall front desk worker and has to deal with the smell whenever she comes in to work.

“It smells disgusting all the time,” Young said. “Having to smell [the old food containers] while working sucks.”

North and South Scott have designated carts for their used containers. These carts can be easily pushed back to Blackhawk, which is right next to the Scotts, unlike Stewart, Evans and Fletcher, which are all a bit more of a trek across campus.

Personally, I do not have an issue walking back to Blackhawk to drop off my used containers as we are supposed to, but Stewart and Evans have had prior issues dropping off containers in the fall semester as well.

Specifically in Stewart, tall stacks of used containers have been left in our dish-room and insects were found in many of them. You read that right. Insects.

As unpleasant as it is to walk to drop off a container in the cold weather, it is surely not worse than the whole first floor smelling like a landfill.

With everyone’s bad habits in Stewart, I am fearful when these students get houses of their own in future years if they cannot pick up after themselves here.

There is not necessarily a better option regarding the containers besides dropping them back off at Blackhawk. If we were to have a cart specifically for containers, it would have to be cleaned out at least every two days.

The U.S. Department of Agriculture states that food left out of the fridge for more than two hours should be thrown away.

At room temperature, bacteria grows incredibly fast and can make you sick. Knowing this, the amount of bacteria sitting and rotting away at the food for weeks in Stewart is concerning.

There is no doubt that the staff at Blackhawk do a great job to keep our containers clean and sanitary, but it is not fun to think about the amount of rotting food or insects that may have been sitting in them days prior.

Next time you let a container sit in your room, think about how much bacteria has already started to grow in it after two hours. Avoid a smelly dorm and return your containers.