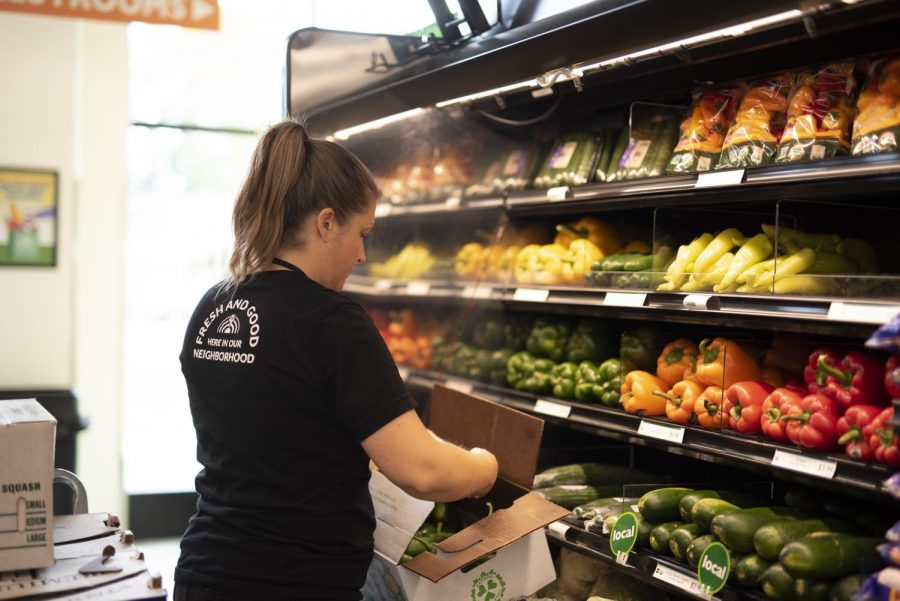 April Lee / Advance-Titan The Oshkosh Food Co-op, pictured above, is one of the closest groceries stores to campus; being located at the corner of Jackson Street and Pearl Avenue.

As a college student who just moved off of the UW Oshkosh campus, one of the very first predicaments I faced was how on earth I was going to feed myself.

While the stereotypical college tendency of buying ramen in bulk and living off of nothing but carbs and sodium all year was a rather tempting option, I decided that shopping in a cost-effective (but healthy) fashion around Oshkosh was the route that I’d rather take.

Before I get into specifics, here is my plea: do not take my tips as the pinnacle of grocery budgeting advice. I am merely a college student who has been living off-campus for a month and wants to share what I have figured out so far.

When it comes to budgeting, let’s use the Classic Meal Plan, offered to students for on-campus meal choices, as a financial reference. The cost of a Classic Meal Plan at UWO is $1,615 per semester or $3,230 per year. For someone who signed a one-year lease and is attending UWO for the full year, we can divide the school year into its 28 weeks to get an average of $115.36 spent per week.

For those staying in their apartment or house for the entirety of the year, beating the Classic Meal mark through the summer will have slightly different math. By including the Ultimate Silver summer package, which allows 100 meals for the summer and costs $1,050, we’d be shooting to spend less than $4,235 over the course of 52 weeks. This boils down to spending no more than $81.44 a week.

This may seem like a daunting goal, but read these tips before ruling out your chances of out-budgeting the meal plan.

The first tip that I have is to throw the idea of food brand favorites out of the window. While Oreos or the well-known Heinz ketchup brand may catch your eye solely due to brand recognition, you can get off-brand cookies and ketchup for a fraction of the price.

Yes, the labeling may look a little peculiar or hard to get used to, but what does that matter? If you are able to pay for the same thing at a reduced value, especially in college, who cares if the name slapped on the label is something that isn’t as well-known?

In some cases, I have seen prices nearly cut in half for items such as loaves of bread and milk when opting out of buying common brands like Wonder Bread or Dean’s.

The next tip I have is to look at the cost per ounce/pound rate on your food. At stores like Walmart, this information can typically be found on the price tag below the food item.

If you are buying something like beef, which may cost you more at the time to buy a greater quantity of, it can be easy to get discouraged.

However, if you are spending 25-50 cents less per pound, and you know you’ll end up buying more of it down the road anyway, just buy the item in bulk. As long as you know that you and your housemates will be able to consume everything before its expiration date, this strategy is a phenomenal way to save more money.

An example of me taking my own advice on this tip happened just last week when I bought 20 oatmeal packs for less than $5.

If I were to eat oatmeal for breakfast every day, I’d only be spending roughly $1.70 a week on a third of my meals. If oatmeal seems too boring, eggs go for as low (or lower than) $1.09 per dozen at Walmart. If you were to eat three eggs a day, you’d be spending roughly $2.00 on breakfast per week. This makes the weekly budgeting goals of $115.36 per week for school year residents and $81.44 per week for summer residents a piece of cake.

A third note of advice that I have is to plan out what you are buying before you go to the grocery store. The one time me and my roommates didn’t make at least a rough list of what we needed, we felt lost and were much more susceptible to buying snacks that we didn’t need without knowing how close we were to our weekly budget.

By having at least a few items listed on our phones before heading to the store, we have an idea of how much we can spend on snacks or other items if we feel the need to.

My last tip is to be an active consumer and find your own tricks as well. At the time that I am writing this, I have only lived in an apartment for four weeks. This means that you can definitely accumulate some of your own budgeting hacks over the next few months too.

With all of this in mind, don’t forget to live a little as well. As long as you’re budgeting your money correctly and you feel that you’re in an adequate financial state, go out with your friends and be a foodie every once in a while at some of the restaurants in downtown Oshkosh.

While keeping track of how much you spend is a helpful practice, living and dying by the numbers will set you up for an experience that is much more stressful than it’s worth.