Self-defense or not: Rittenhouse verdict will likely have lasting impact 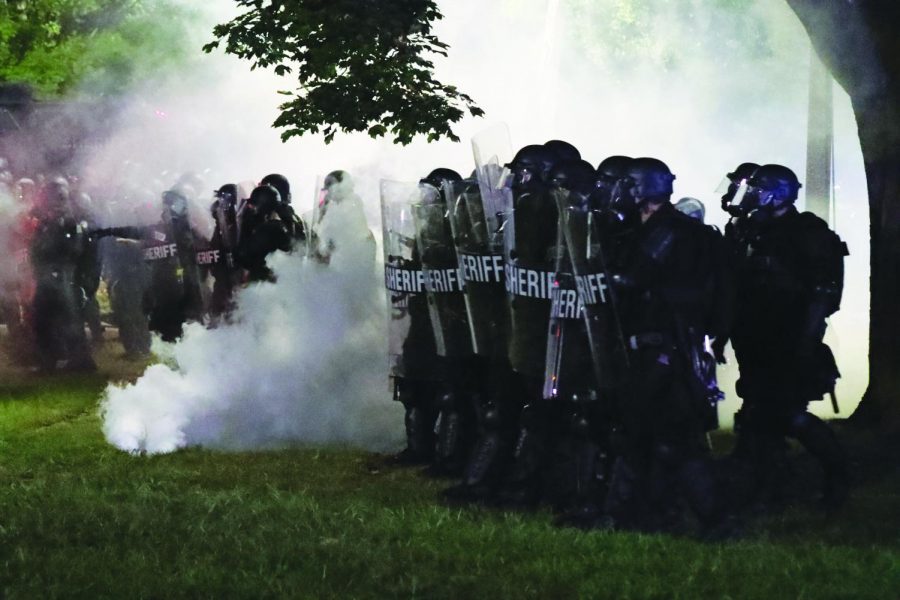 Photos courtesy of UWO alumnus Leviathan Whitfield The trial of Kyle Rittenhouse (pictured below), who is facing multiple charges for his actions on Aug. 25 in Kenosha, could set a precedent for future cases of vigilantism and the use of deadly force.

Will the jury believe Kyle Rittenhouse was defending himself when he killed two men and injured another?
The trial of Kyle Rittenhouse began on Nov. 1, with testimonies coming from numerous parties regarding the now 18 year-old’s actions on the night of Aug. 25, 2020.

Rittenhouse is facing multiple charges for shooting three men, and killing two of them, with an AR-15-style rifle amid police brutality protests over the shooting of Kenosha civilian Jacob Blake just two nights prior.

According to National Public Radio (NPR), Rittenhouse classified himself as an EMT while claiming to have the gun on him as a way to protect himself. He was among many who seemingly formed a mock militia amidst violent riots following the shooting and paralyzation of Blake after an altercation with police officer Rusten Sheskey.

According to testimony now in its second week, the then 17-year old then got into a heated altercation with a man named Joseph Rosenbaum near a gas station before running from him and shooting him dead minutes later.

After killing Rosenbaum, a plethora of concerned and timid civilians pursued Rittenhouse.

One of those civilians was Anthony Huber, who had a skateboard in his hand and was shot and killed by Rittenhouse mid-pursuit.

Following the killing of those two unarmed men, Rittenhouse. was seen on camera walking toward and past numerous police cars and ambulances with his hands up and rifle still attached to his hip. Rittenhouse, unlike Rosenbaum and Huber, was able to go home that night.

Since initially being brought to jail following his actions in Kenosha, Rittenhouse had his $2 million bail paid for by Atlanta lawyer Lin Wood and attorney John Pierce under a Texas nonprofit organization that they formed called #FightBack. Once out, Rittenhouse was spotted at Pudgy’s Pub in Racine wearing a T-shirt printed with the words “Free as Fuck” while making a white power symbol with his hand.

On top of the homicide-related charges, Rittenhouse is facing possible repercussions for an emergency curfew violation and possessing a firearm under the age of 18.

Among many testimonies given in the first week of the trial was one given by Gaige Grosskreutz, who was shot in the arm while pursuing Rittenhouse after he witnessed the teen’s violent actions. Grosskreutz attempted to subdue Rittenhouse with a handgun before being shot in the arm, and then he put his hands up in the air, claiming he heard Rittenhouse rerack his automated weapon anyway and he took that as a sign that Rittenhouse was going to continue
firing.

Rittenhouse and his defense team are testifying against the shootings, hoping that the jury believes that the former Grayslake Police Department youth cadet acted in self defense.

While Rosenbaum and Huber were unarmed against Rittenhouse’s semi-automatic gun, the Antioch, Illinois native’s defense team is attempting to make the jury believe that Rittenhouse would have been in serious danger if he did not fire his weapon.

As a Kenosha resident who saw the aftermath of violent riots that proceeded for days on end, this case holds extra weight.

If Rittenhouse is able to cross state lines after curfew with a gun that he was too young to possess and kill two unarmed people in a situation that he inserted himself into without warranting a maximum jail sentence, this will send a message to many others that it’s their duty to act like a police officer for a night and walk the town in search of confrontation.

If Rittenhouse ends up with a reduced sentence, downtown Kenosha will likely become an inferno once more with the possibility of those who support Rittenhouse marching downtown with rifles of their own.

Watching this messy situation unfolding in my hometown magnifies its overall impact in my eyes, but you do not have to be a Kenosha resident for this case to pertain to you.

The verdict in the Rittenhouse trial could determine the behaviors of rioters and those who feel that
they can take matters into their own hands.

Never did I imagine something like this could happen in my backyard, but seeing stores boarded up, buildings demolished and messages written on the walls and boarded windows of downtown businesses shows the raw frustration of many who are tired of living in a world of hate and racism.

While Sheskey was cleared of criminal wrongdoing and was never pursued in court, Rittenhouse’s situation is vastly different; neither of his first two victims were armed in any way.

While some may make the argument that Rittenhouse is a “good kid” since he was training to be a police officer, I would argue that his actions and career choice present huge red flags.

The teen who wanted to become a police officer broke the law on numerous accounts and fired shots at unarmed people in a situation that he put himself in. Say that out loud, and try not to be horrified.

With the country scrutinizing this case, I encourage all to keep an eye on this case and be prepared for an inevitable outcry from those who don’t see the result that they want.