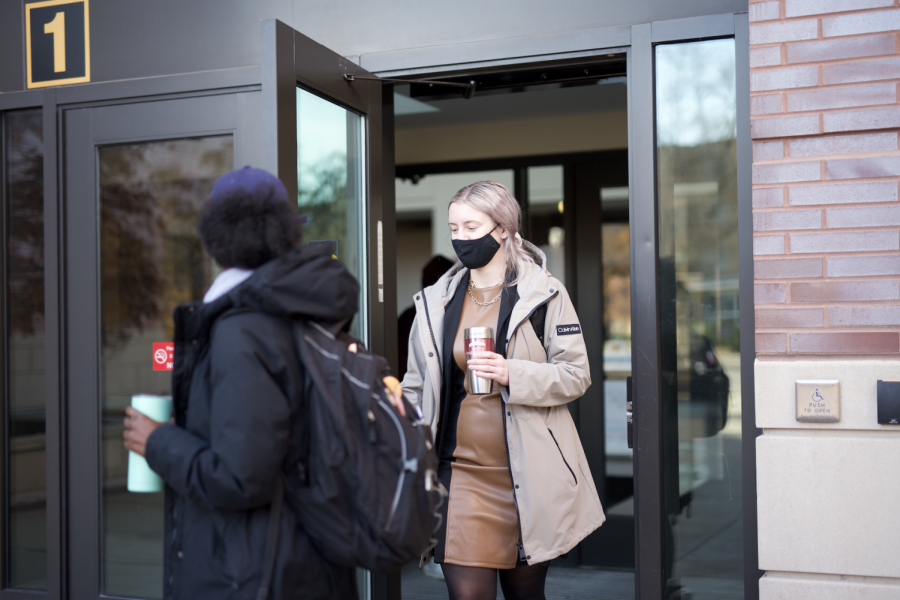 April Lee / Advance-Titan Something as simple as holding open a door for another person can go a long way in making their day better.

Today’s society seems to put a spotlight on all of the reasons that separate people from one another.

Whether it be opinions on COVID-19 vaccines, mask regulations, political party affiliations, rivaling sports teams or a variety of other topics, too many people allow the topics that divide us to dominate their attention and conversations on a daily basis.

According to SingleCare.com, depression impacts 264 million people, with those numbers being up from pre-pandemic data.

Data from the Substance Abuse and Mental Health Services Administration (SAMHSA) shows someone dies from suicide about every 12 minutes in the United States.

According to the World Economic Forum, 114 million people have lost their jobs, and many more saw their working hours reduced during the pandemic before falling into financial situations that were anything but ideal.
Now, more than ever, acts of kindness can go a long way in serving as a remedy for all of the divisive factors listed above.

Holding the door open for someone
This one literally takes two seconds, but it can be enough to make somebody else’s day. A gesture that makes it easier for someone else to get to their next class, or whatever their destination may be, can go a long way for many people.

The nice thing about this act of kindness is that you don’t have to hold the door open for someone that you know.
This can be done for whoever happens to be behind you when you open a door, and no matter what each of your values and beliefs are, it’s an act that can make both parties feel good about themselves.

Checking in on peers
These do not have to be extensive, but a simple, “Hey, how have you been doing lately?” could help somebody who may be having a hard time.

Mental health checks can be done in person or online, depending on your connection with the people around you.
It is almost impossible to hammer home how important checking in on one another is, especially in a time where coming down with COVID-19 can leave someone isolated in their room for up to 14 days.

According to SAMHSA, in the U.S. there were more than 1.4 million suicide attempts last year that resulted in about 47,000 deaths. Some people are waiting for validation or a sign that they mean something to somebody, and mental health checks can provide that reassurance.

Compliment somebody
This act should be used selectively, as reactions from people you do not know may vary. Complimenting friends on anything from their outfit to the quality of a project they’re working on could still go a long way though.

Many people are self conscious of themselves or something that they have made, but hearing positive affirmations from someone else can increase their confidence, or at least make them reconsider some negative thoughts they may be having.

Compliments can help many people, but they are extra beneficial to those who don’t think highly of themselves.

Donate food, clothes and toys
As the holiday season approaches once again, those who are in financial binds or are homeless have many reasons to not look forward to.

There are parents who would love to give gifts to their children in celebration of the holiday season, but due to varying circumstances are not able to do so this year.

There are also homeless people who have to find somewhere outdoors where they can effectively preserve their body heat in the sub-zero temperatures that inevitably occur every year.

The Oshkosh Fire Department is accepting gift and non-perishable food donations at any of their six stations from now until Dec. 12.

If you find that you have extra items or money after doing your holiday shopping, the Oshkosh Fire Department will be taking the donations to the Salvation Army for those in need. Another option is donating or volunteering directly to the Salvation Army, helping to provide meals, coats, toys and more.

While I only listed four acts of kindness, there are thousands out there that take little to no time at all but can have a rather sizable impact on whoever these things are done for. So leave a treat for your letter carrier, buy a gift card for the person behind you in line, make baked goods for your neighbors or smile at someone you don’t know.

As this holiday season approaches, let’s remember to do all that we can to bring others up instead of pushing them down.