Catastrophizing: It’s the end of the semester, not the world 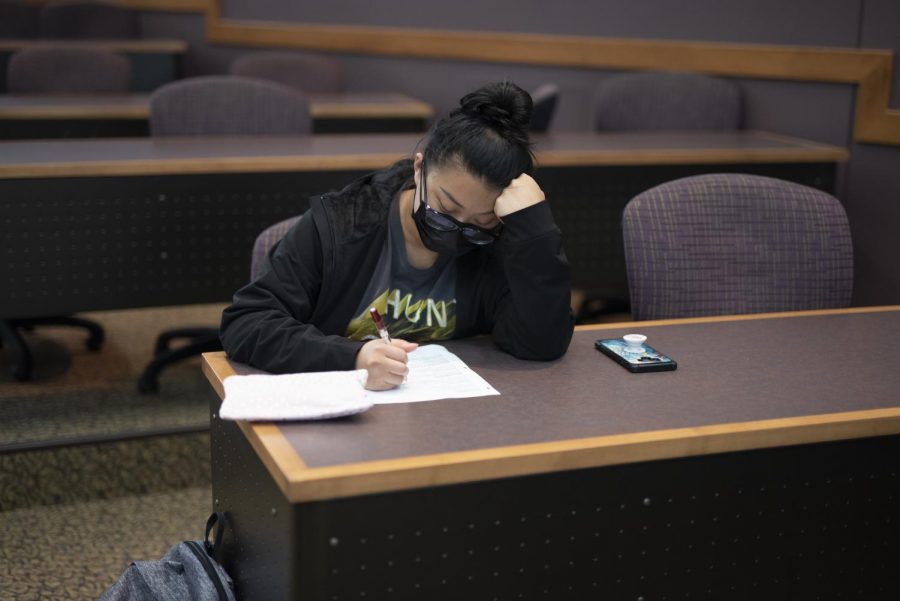 Does this sound familiar?

Even if you’ve never personally discovered the depths of this depressing rabbithole (or expressed it in such overstated verbiage), you may know others who have.

This is catastrophizing, which is “when someone assumes the worst-case scenario or believes that things are much worse than they actually are.” According to verywellhealth.com, catastrophizing is a type of distorted thinking that commonly arises from anxiety and depression. These conditions make the mind more susceptible to cognitive fallacies like this one.

Catastrophizing instills a sense of hopelessness and self-pity that leads to further disappointment and underachievement in the future.

Falling prey to catastrophizing can lead to an otherwise avoidable failure in the form of a self-fulfilling prophecy, as the sense of hopelessness and self-doubt limits one’s performance and inhibits success.

The two main causes (and, twistedly, effects) of catastrophizing are anxiety and depression, as they make the mind more susceptible to cognitive fallacies such as the one of note here.

It’s no surprise that catastrophizing is commonplace among college students, a demographic that lives in a high-pressure environment and reports high levels of stress. In fact, it’s the perfect environment for something like catastrophizing to take hold.

Exemplifying this, 57.6% of college students reported feeling at least “more than average” stress levels and 87% of those aged 18-23 cited “education” as a significant source of stress in their lives in 2020 (according to the American College Health Association and the American Psychological Association polls, respectively).

Another factor that increases one’s chances of catastrophizing is the fear of losing something of value. When something that someone values is at risk, there is bound to be a certain level of anxiety, which risks spiraling into catastrophizing.

A perfect, timely example of this is final exams for classes. A student who values their GPA a lot may be very anxious about their final exams, leading them to catastrophize about how they are “bound to do horrible” on them and to focus on all of the negative repercussions that could occur. That, in turn, takes time away from them that could be spent studying. It puts them in a defeatist mindset that leads to a worsened performance.

This is precisely why catastrophizing should be a concern for college students; the inflated values of things like GPAs lead to a harmful, stress-laden environment that can take a severe mental toll on students.

It is well documented that the U.S. grading system has a plethora of negative influences on students, including increased anxiety, lessened creativity and risk-taking, hindered intrinsic motivation and even inhibited learning, all of which can harm a student’s mental state.

At its core, the grading system excels at boiling a student’s worth down to a jumble of letters and numbers that could have genuine implications for their future. How nice.

This effectively communicates to a student that their job is to work for a high GPA, even if it means sacrificing opportunities that could be more beneficial (internships, freelance work, online certifications) and/or a healthy social life.

A recent New York University study found 53% of students reported neglecting their social life due to stress on at least one occasion, showing exactly the kind of effect that the system can have.

There has also been an increasing sense that having a strong portfolio and internship experience is more important than a good transcript, making the fact that colleges use GPA requirements for admissions to programs, keeping good standing in programs and general university admissions seem a tad archaic.

When students are told that their worth and success will be portrayed in an unbelievably rigid and narrow fashion, it’s inevitable that those who wish to succeed will follow suit, making sacrifices to conform to a toxic “productivity” culture.

This pressure to be productive (in a way that services your GPA, of course) has consequences, from students increasingly relying on cheating to get better grades to students taking poor care of themselves (less sleep and poor diets) to spend more time on “meaningful things.”

In a 2019 Kessler International poll, 86% of students admitted to cheating in college. This increase in cheating perfectly sums up the fundamental flaw with a GPA, as it shows the active sacrifice of learning in order to meet an arbitrary standard.

GPAs, in a beautiful instance of irony, so often fight against creating a learning environment. It promotes extrinsic motivation, which is known to be less beneficial and fulfilling than intrinsic motivation, encouraging students to spend less time on what they’re passionate about and more time checking off boxes.

Instead of promoting learning and creativity, grades are often a method of coercion, or even a scare tactic, telling students that if they want to succeed in a learning environment, they’ll have to do it on the university’s rigid terms, making the GPA system one that simultaneously handholds and inhibits its subjects.

Rant over; it is clear to see how students are perfectly set up to fall victim to detrimental patterns of thinking like catastrophizing that can do a lot of long-term harm to a person.

Luckily, there are plenty of methods and resources that can prevent catastrophizing. There are things that I have found successful in the past to reign myself in.

There is never anything guaranteed in life aside from the fact that it will end, so it would be silly to think that there won’t be hardships along the way. Not to mention that people overcome terrible things all the time, things much worse than failing a chemistry final.

If you start catastrophizing, it can be handy to just remember a time you failed in the past and reflect on how little impact it had on where you are right now, making your current stresses seem silly.

Second, focus on what could go right.

Simply flipping your perspective can be a deceptively simple, but effective, method to stop yourself from catastrophizing. Focusing on positive outcomes can be more conducive to learning, success and satisfaction.

I find this to be the most effective. Just think, if you expressed all this spiraling paranoia to a close one, they would probably think you sound like an idiot, and rightfully so. Catastrophizing is grounded in irrational fears hindering your ability to logically assess a situation, so chances are there is not much validity in what you are imagining when catastrophizing, so try to recognize that in the moment.

And, of course, never forget the resources that campus offers at the Counseling Center, which can be found at uwosh.edu/counseling.