The UW Oshkosh swim and dive teams were in action this weekend with the swimmers competing at Ripon College and the divers competing at the University of Illinois at Chicago. This was the two teams last scheduled meet before the Wisconsin Intercollegiate Athletic Conference championship meet on Feb. 15. The women’s swim team picked up a victory against Ripon, beating the Redhawks 134-70 while the men lost their contest 107-92. 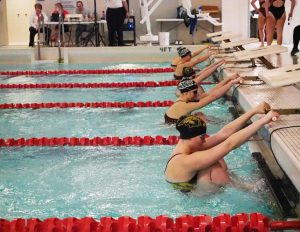 The women had winners in eight events, with senior McKinzie Halkola and freshman Jennifer Lutz taking home first-place honors in three events apiece. Both Halkola and Lutz, joined by sophomore Sydney Challoner and freshman Tessa Shorten, opened the meet by winning the 200-yard medley relay with a time of 1:57.48.

Two events later, Halkola won the 200-yard freestyle race, finishing a full second ahead of the second place finisher. Halkola picked up another win later in the meet, taking the 500-yard freestyle with a time of 5:33.45.

Lutz raced her way to two first-place finishes in both the 100-yard butterfly and the 100-yard backstroke with times of 1:02.13 and 1:04.67. Other winners for UWO were Allison Panske in the 100-yard freestyle and Rebecca Birriel in the 200-yard individual medley.

Lutz was proud of the way she raced at Ripon and wants to use that to do well at the conference meet.

“I mainly was thinking about my turns, my starts, and the finish” Lutz said. “I need to work on staying focused and how I need to swim for every single race.”

The men had winners in four events on Saturday. Following suit, the men also took first in their first event of the day with the team of freshman Josiah Vandenberg, senior Grady Hilgendorf, sophomore Bryan Solomon, and freshman Jarrett Lieder winning the 200-yard medley relay with a time of 1:44.10.

Hilgendorf attributed his success at the Ripon meet to his mental outlook coming into the meet.

“It was just a matter of being relaxed, rested and ready for the meet,” Hilgendorf said. As he prepares for conference, he said teamwork to keep each other motivated is a huge factor. “Being prepared for all the races and encouraging teammates to keep the energy flowing.”

Head coach Christopher Culp was proud of the effort his team gave this past weekend.

“I was pleased with our performance,” Culp said. “I’m liking the changes we’ve made as far as technique is concerned. I’m really excited about how we’ve set ourselves up for conference in a couple weeks.”

The Titan next meet will be the WIAC Championship at Brown Deer Feb. 15-17.