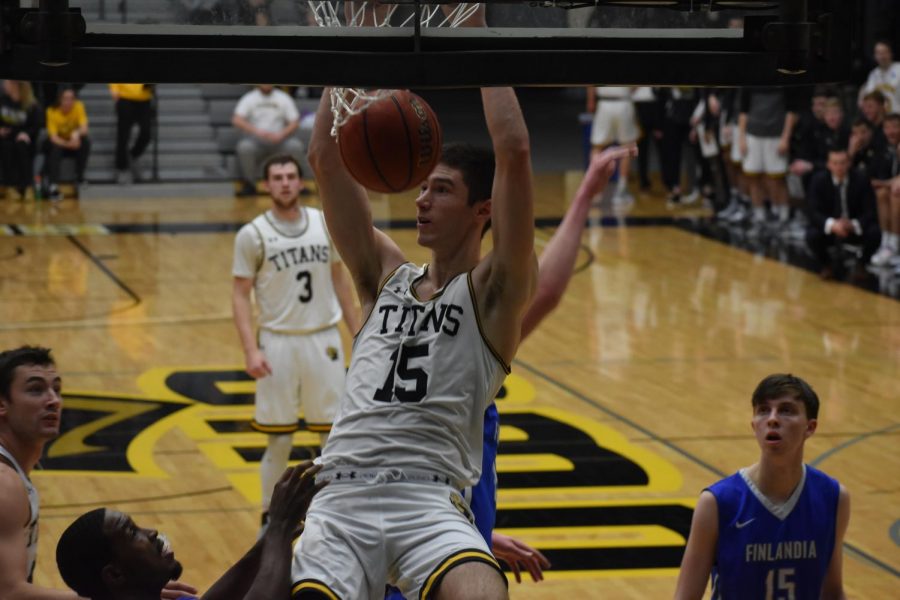 Junior forward Adam Fravert jams home a dunk after a slashing to the basket against Finlandia University. The 6-foot-8-inch Marshfield native finished the game with six points and five rebounds in 18 minutes.

The UW Oshkosh men’s basketball team strung together two more wins over the past week, putting the team up to seventh in d3hoops.com’s top-25 rankings for this week.

After defeating Finlandia University 104-60 last December, UWO dismantled the Lions on Tuesday, coming out with a 95-48 victory.

Following a 10-0 run in the first 2:20 of the game, the Titans were able to keep applying pressure as they racked up nine steals over the course of the first half, which led to easy transition baskets.

Head coach Matt Lewis proceeded to empty his bench over the course of the second half and got his younger players some valuable playing time.

Assistant coach Casey Korn said the ability to get a big lead and get younger players some extended playing time is a way of paying them back for the hard work they put in at practice.

“It’s hard when people aren’t at practice every single day to see what the younger guys do for us on a daily basis,” Korn said. “Those guys are the other team’s best players and they have to learn a new offense sometimes twice a week, three times a week. It just makes us better as a team, and it’s not always seen on a Tuesday night or Saturday night.”

On a night where 14 Titans made it into the scoring column, senior guard Ben Boots led the Titans in scoring with 18 points while junior center Jack Flynn added 14.

Junior guard Brett Wittchow ended the game with 10 points, seven rebounds and four assists and said getting the ball down in the post to Jack Flynn allows the floor to open up for shooters to get open shots.

“I thought Jack did a great job when the ball came inside,” Wittchow said. “He just took his time, he didn’t rush anything, waited for guys to move and then he’d kick it out and we’d have catch-and-shoot threes and those are the ones we practice every single day.”

The Titans ended the game with a season-high 16 steals in the contest, and junior guard Jake Zeitler said that was a product of studying film.

“Hustle, film study, we watched a lot of film on the guys,” Zeitler said. “The coaches did a really good job of giving us a good example of what they were doing. Just us flying around on defense and pressuring them. … We like to ball pressure people so I think ball pressure really gets teams.”

On Saturday, the Titans traveled back to Illinois where they faced off against the Elmhurst College Bluejays, trouncing the Bluejays 68-57.

After beginning the game in a back-and-forth battle, the Titans pulled away from the Bluejays using three straight baskets from Fravert to go up 25-17 with 4:23 to go in the first half.

Heading into the break, UWO led Elmhurst, 36-27. The Titans would keep Elmhurst at bay during the second half. They also kept the Bluejays to 32 percent shooting from the field in the period.

Fravert led the Titans with 22 points, eight rebounds, three assists and one steal. Flynn and Wittchow added 14 points each to propel the Titans to the victory.

The Titans have now won four straight games. Wittchow said it’s important for the team to keep rolling and carry momentum into the conference portion of its schedule.

“We want to go into conference on as high of a note as possible,” Wittchow said. “Racking up a few more wins here before the new year, before conference starts, is going to be huge for our confidence and huge for our team.”

The Titans will face a duo of Michigan teams next in Alma College on Friday at 7 p.m. and Calvin College on Saturday at 3 p.m. in Kolf Sports Center.