Led by Flynn, the Titans complete their redemption quest in the Division III Championship game 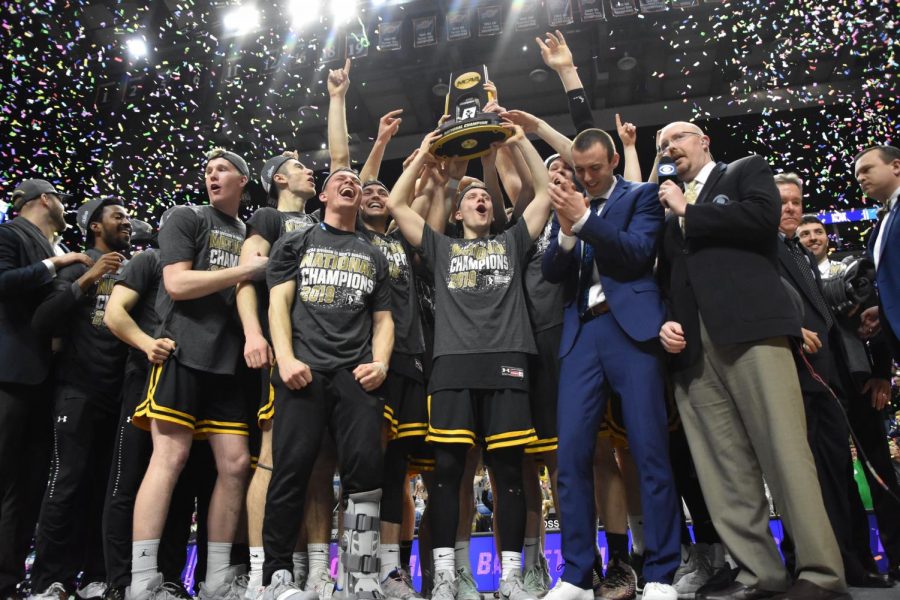 The team holds up the championship trophy in front of the Titan faithful as confetti rains down around them.

UW Oshkosh men’s basketball has had a season that included a 23-game win streak, a conference title and, finally, a national championship.

The Titans defeated Swarthmore College by a final score of 96-82 to capture their first national title in program history.

Swarthmore played a physical brand of defense to make up for the size deficit but it didn’t matter as junior Jack Flynn feasted on the Swarthmore interior. Flynn scored a game high 33 points on 13-18 shooting and added seven rebounds.

Flynn said taking over in a big spot was a product of his teammates getting him good looks at the basket.

“It’s just a mentality I have when I go into a game,” Flynn said. “Luckily, I have the guards who can give me the ball in a good position.”

Over the course of the tournament, Flynn averaged nearly 18 points per game and 10.3 rebounds per game to earn the NCAA Division III Men’s Basketball Tournament Most Outstanding Player Award.

Flynn said winning the NCAA Tournament Most Outstanding Player was only possible because of those around him.

“It’s definitely a very special thing for me,” Flynn said. “It’s a great honor. I couldn’t have done it with my great teammates and my great coach—all of my great coaches.”

The Titans were able to scorch the Swarthmore defense throughout the game as they shot 52 percent from the field.

Once again, all Titan starters ended the night in double figures as sophomore Connor Duax had 16, seniors Brett Wittchow and Ben Boots scored 14 and 10, respectively, and junior Adam Fravert poured in 14 points. The starters combined for 87 of the Titans’ 96 points.

As was the case in the Elite Eight round, Boots had an off-shooting night but was able to contribute to the team effort with six rebounds and seven assists.

Boots said after losing in the national championship last year, they were not going to relive that mistake this season.

“Getting to the national championship game and losing is one of the most devastating feelings,” Boots said. “We knew that we’re fortunate enough to get back, we weren’t going to let that happen again.”

Fravert recorded a double-double, adding 12 rebounds, five blocks, three steals and two assists to his 14-point outing. He was also named to the All-Tournament team for his efforts.

Fravert said the team was focused in its pursuit of redemption from last year’s loss.

Wittchow said the success they had during the regular season prepared them for this postseason run.

“We were tested all year,” Wittchow said. “We got every team’s best shot. A lot of the year we were ranked top-five. We had a win-streak going. We would get big leads and they would start to chip away at them. We found a way to win and I think that came into play tonight.”

The team used its size to get in the paint and ultimately, get to the free-throw line as the team went 21-26 from the charity stripe. The Titans also played disciplined defense as Swarthmore only went to the line four times in the game.

“National championship,” Boots said. “That’s the one thing we always wanted. You push away all the other individual things. From where this program was four years ago compared to where it is now; there have been so many special people who have been a part of that and Brett and I are lucky to be two of those people.”

Head coach Matt Lewis said he knew when he was recruiting these seniors, that they would be great additions to the program.