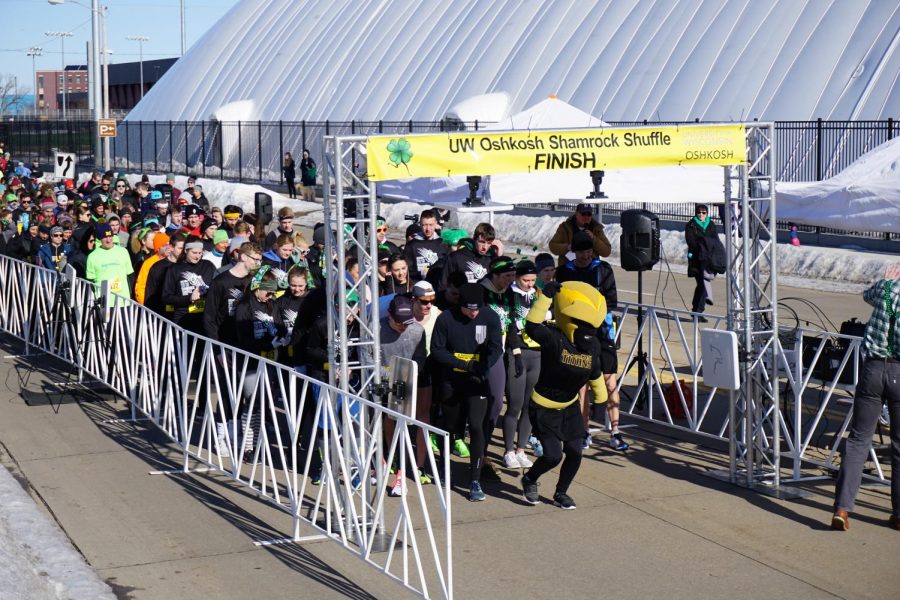 The director of the Shamrock Shuffle, Jordan Mooney, said this race raises money for charities around Oshkosh and is a fun way for students to stay active.

“The Shamrock Shuffle is in its 12th year here at UWO,” Mooney said. “It’s a fun run or walk 5K, and it is a charity run so all of the proceeds will benefit the Oshkosh Area United Way and also the K-9 unit at the UWO Police Department.”

A student at UWO, Nicole Stallard, said she was looking forward to this race because it was a good way to get active.

“I decided to participate in the Shuffle because I thought it would be a fun activity to do with my friends and co-workers as well as interact with some Oshkosh locals,” Stallard said.

Mooney said he put a team together with the employees at the Student Recreation and Wellness Center because he thought it was important for them to be involved.

“We are one of the larger student employers on campus, and so I kind of thought we should get more students involved in the Shamrock Shuffle,” Mooney said. “It’s our race and we host it, so our students should be a part of it and proud to join our team.”

Mooney said he wanted to have the biggest team at the Shamrock Shuffle because a different team has been winning for years.

Mooney said that he got enough people to sign up for his team to win the plaque for the biggest team at the Shamrock Shuffle.

“This year we were excited to put a team roster together of 37 runners or walkers and we won the biggest team so the plaque will stay here,” Mooney said.

Stallard said that she was excited to be a part of “Team SWRC.”

“It was a lot of fun being able to run with my co-workers and cheer each other on,” Stallard said.

As a runner from last year’s Shamrock Shuffle, Jessie Ridle said that she enjoyed her time running and walking in the Shuffle and thinks that it is a fun activity for all students.

“The overall environment was extremely uplifting and positive,” Ridle said. “There were tons of people walking and running, and you could really go at your own pace and there was no pressure to finish in a certain amount of time.”