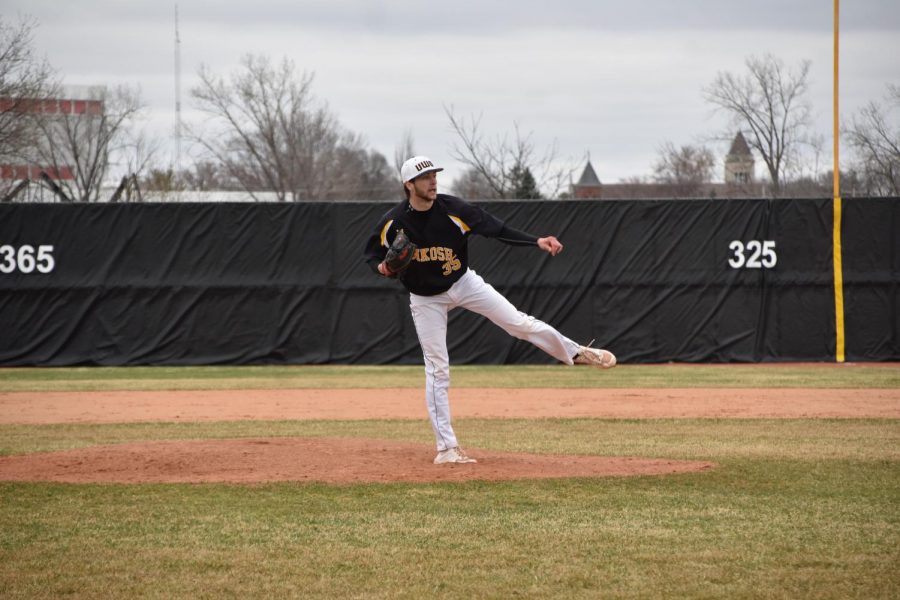 Senior pitcher Chris Atwood reacts to his throw to the plate versus the Pointers.

The UW Oshkosh baseball team opened up Wisconsin Intercollegiate Athletic Conference play, losing five out of six games as they took on UW-Whitewater and UW-Stevens Point in three separate doubleheaders.

Wednesday afternoon the Titans played a double header against WIAC rival UW-Stevens Point, splitting the afternoon series versus the Pointers.

Treml didn’t receive much support from the offense, as only third baseman Jonathan Selchow was the only Titan able to record a hit. Selchow went 3-3 from the plate, scoring two runs and one walk.

In the second game of the doubleheader, UWO shut out the Pointers winning 5-0.

On the offensive side, Hunter Staniske, Sean Cummins, Alex Koch and Selchow recorded nine of the ten hits for the Titans.

The Titans played four games versus the Warhawks last weekend, winning only one of four games.

The Warhawks outscored the Titans 19-5 in the first doubleheader on Saturday, leading to losses of 5-4 and 12-1 for the Titans.

Treml took the mound in the first game, surrendering five runs to the Warhawks. Treml set the UWO record for career innings pitched at 265.2 and passing Jordan Timm’s previous program high of 264.1, established from 2001-04.

UWO rallied back in the seventh inning to even the score at four. In the bottom of the eighth the Warhawks were able to score a run to put them up 5-4, following a fielder’s choice. UWO were unable to score in the ninth, losing the first conference game of the year.

In the second game, Atwood took the loss as he allowed seven runs while recording one walk and striking out one in seven innings of work against the Warhawks.

On Sunday the Titans split the double header losing the first game 6-4 and winning the second game 10-9.

In the first game, UWO evened the score at four in the top of seventh inning. A throwing error by shortstop Ott in the bottom half of the inning allowed a run for Warhawks, making the score 5-4. The Titans lost 6-4.

“In our victory we got off to a good start by scoring three runs in the first inning,” Radde said, “We also had a lot of big-time hits, which gave us the extra confidence we needed. Also great pitching all the way around, going against some tough hitters. They were a very scrappy team.”

Oshkosh outhit the Warhawk team 23-21 with Radde going 9-5 at the plate with a triple, home run, two walks, three runs scored and four runs batted in.

The Titans will play back-to-back doubleheaders versus UW-La Crosse March 13 and 14 in La Crosse. First pitches are set for noon and 3 p.m. on both days.