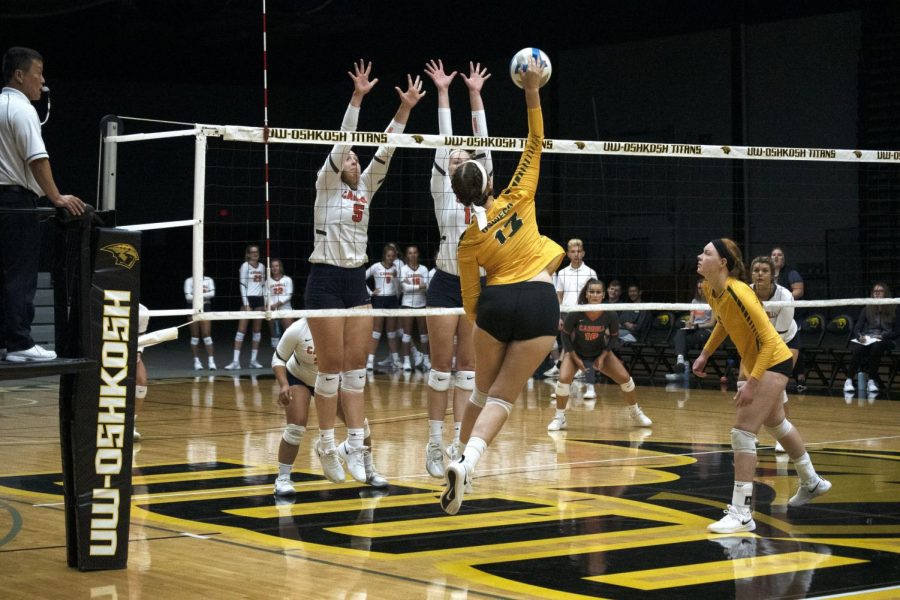 UW Oshkosh hosted the Pizza Hut Classic at Kolf Sports Center Sept. 7-8. Seven teams came from New York, Illinois and Wisconsin to Oshkosh to participate. Pictured is an Oswego University hitter driving a ball past a pair of Carroll University defenders on Saturday.

The UW Oshkosh women’s volleyball team never lost a set in the Pizza Hut Classic at Kolf Sports Center last weekend, pushing its record to 5-2 for the season.

Senior defensive specialist Rachel Gardner had 31 digs on the weekend.

Jaeke said the team had an all-around great performance at the classic.

“We were very consistent this whole weekend,” Jaeke said. “There were times we struggled with our serve-receive, but our setters were able to better the ball for our attackers who were able to score. We worked very well as a team, and our sideline was very engaged and cheered us on. We were able to overcome our struggles and perform well as a team.”

Jaeke said the underclassmen have played a vital role in getting the season off to a good start.

“Our underclassmen have been great supporters and competitors in and out of the practice gym,” Jaeke said. “They praise others successes as if it was their own and push us to be better in our practice gym.”

Head coach Jon Ellmann said instilling a culture that nurtures improvement is important for this team.

“‘Be even better’ is something that we talk about in our gym on an almost daily basis,” Ellmann said. “We are relentless in our pursuit of improvement. There isn’t one area that we don’t want to make positive strides in.”

Ellmann said the team has transitioned to working on a different phase of its game as they head deeper into the season.

“We have spent the last week being heavily invested in the reading and planning phases,” Ellmann said. “In other words, seeing what our opponents are doing and working on systems and tactics that help us defend. This week we are focused on the execution phase. We will focus heavily on things we can control on our side of the net.”

The Titans took on two non conference opponents in Stevens Point on Wednesday and have a week off before starting conference play on Sept. 18 at home against UW-La Crosse.