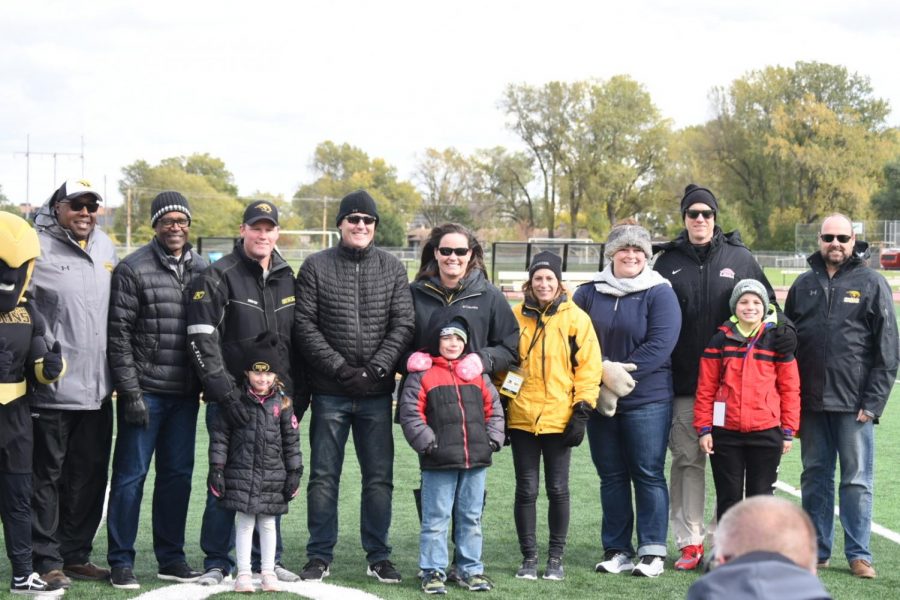 The 2019 Titan athletics Hall of Fame inductees stand on the field at Titan Stadium with Athletic Director Darryl Sims and Chancellor Andrew Leavitt on Saturday.

On Sunday, eight former UW Oshkosh athletes were inducted into the Titan Hall of Fame at a ceremony at the Culver Family Welcome Center.

Ziebell, an Oshkosh North graduate, currently sits at fourth on the all-time scoring list at UWO with 1,797 points. Ziebell ranks 10th in UWO history with 654 rebounds.

During his time with the Titans, the team made the NAIA District 14 Tournament in 1987, 1989 and 1990 and was selected to the UWO All-Century Team.

Andy Moriarty
Moriarty played running back for the Titans from 2003-07 and is the all-time Oshkosh leader in rushing (4,496 yards). He was also selected to the WIAC All-Centennial Football Team in 2012.

During the 2005 season, Moriarty ran for a school-record 316 yards in an overtime victory against UW-Eau Claire.
Two years later, he rushed for 1,690 yards and 16 touchdowns, both school records, en route to earning All-America Second Team and All-West Region First Team honors from d3football.com.

The top four rushing games in UW Oshkosh history are all held by Moriarty and he sits in second for the school in both career points and career rushing touchdowns.

Renee McGrath
McGrath’s hall of fame induction comes after a career that distinguished her as one of the best gymnastics athletes to come through UWO.

During her time at UWO, McGrath recorded a national championship, eight All-America awards and two conference titles.
McGrath only spent two years in Oshkosh; she transferred from Northern Michigan University to Central Michigan University and then to UWO in 1990. With McGrath’s help, the team placed second at the NCGA Championship meet for two straight years.

During the 2006 season, Lund struck out a WIAC record 22 batters in a playoff win over Coe College (Iowa). The following season, Lund went 19-8 as a starter and led the team to a WIAC championship.

Lund set a WIAC record in 2006 by striking out 294 batters and still sits at first in the WIAC career rankings for strikeouts. She is also second in innings pitched, victories and shutouts and third in ERA.

Jeremy Jirschele
Jirschele capped his outstanding UWO baseball career with a selection to the WIAC All-Centennial Team in 2012. He also earned two All-America awards during his tenure as a Titan.

The second baseman currently ranks second in the WIAC record books in doubles, third in hits and 11th in runs scored.
Jirschele earned an All-Midwest Region Second Team accolade in 2003 and was named to the All-America First Team and the WIAC Position Player of the Year in 2004.

Robyn Jarocki-Hughes
Another member of the WIAC All-Centennial Team in 2012, Jarocki-Hughes collected 10 national titles and 17 All-America awards as a Titan from 2003-06.

The starting pitcher recorded a 24-8 record as a Titan and helped the baseball team to four WIAC championships and two NCAA D-III World Series appearances from 1996-99.

His 0.76 ERA that season remains the fifth lowest in WIAC history and he also ranks fifth with 22 complete games and ninth with 261 innings pitched in the WIAC record books.

The inductees were honored at halftime of UWO’s football game against UW-Stevens Point on Saturday.
The eight inductees join 203 other athletes in the Titan Hall of Fame.