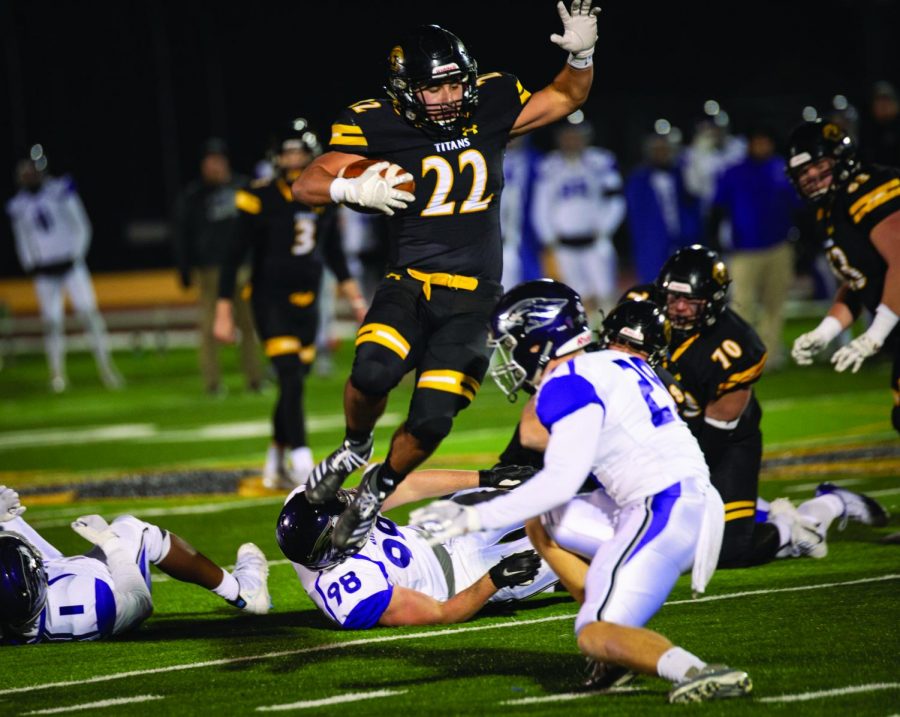 Three weeks ago, the UW Oshkosh football team suffered a 28-point loss to UW-La Crosse and was on the outside looking in at a chance at the playoffs. On Saturday, Nov. 16, they beat nationally ranked UW-Whitewater and earned an automatic playoff berth.

The team rallied back from the 31-3 loss and strung together a three game winning streak against UW-Platteville, UW-River Falls and UW-Whitewater.

UWO and UWW traded the lead five times in a game that came down to the wire as the Titans prevailed 27-20.
The Titans showed their talent under pressure as freshman quarterback Kobe Berghammer connected with junior Mitchell Gerend for a 35-yard touchdown on fourth down with under ten minutes left in the game.

The touchdown tied UWO with UWW and sophomore Jaydon Haag’s clutch extra point gave the Titans a 21-20 lead.
Haag made a major contribution to the team’s win on Saturday, kicking a 42-yard and a 49-yard field goal late in the fourth quarter to seal the Titans’ victory.

Despite his inexperience as a place kicker, Haag doesn’t have trouble having to perform in high-pressure moments.
“I didn’t kick in high school so I honestly don’t get nervous,” Haag said. “Every kick is the same, I go out and I kick the ball.”

In addition to Berghammer’s touchdown pass to Gerend, Berghammer also recorded a rushing touchdown as did senior Riley Kallas.

The UWO defense embarrassed the UWW offense as the Titans forced five interceptions, the most Whitewater has thrown in a game in more than 20 years.

Junior Kollyn Beyer recorded one of the five Titan interceptions last Saturday, bringing his total on the year to five, the best in the WIAC.

Beyer credited his success forcing turnovers to great team play on defense.
“It’s mostly just about doing my job, and trusting the ten other guys to do their job,” Beyer said. “When we are all doing our jobs we are all going to make plays.”

Since UWO earned co-conference champion honors, they earned an automatic playoff berth. However the seeding of the post-season tournament was not determined until Sunday.

The UWO football team, coaching staff and some dedicated fans gathered in Sage Hall Sunday to watch the livestream of the tournament selection.

UWO was selected to play Central College of Pella, Iowa on Saturday, Nov. 23, in the first round of the National Collegiate Athletic Association Division III football tournament.

After the selection process, head coach Pat Cerroni briefly addressed his team.
“Good job, it’s one at a time from here,” Cerroni said.

Cerroni then asked the team seniors if they had anything to add. One senior spoke up without hesitation.
“Lets get it.”