Titans dive into the season with competitive team placement 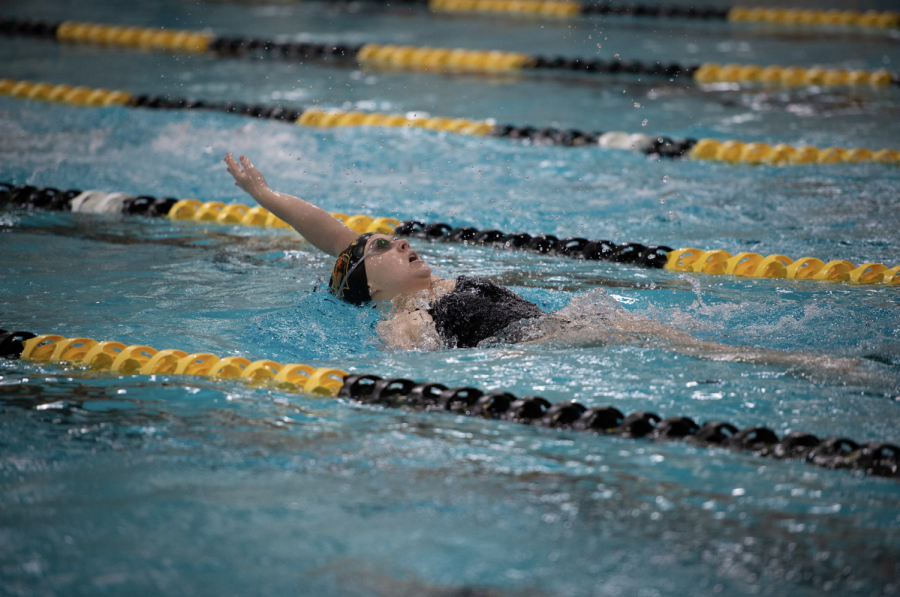 A UW Oshkosh swimmer performs the backstroke at the home meet against UW-Eau Claire on Oct. 12.

The Titans dove into action as the men’s and women’s swim and dive teams fought to claim 2nd and 3rd in the Gene Davis Invitational at Lawrence University on Nov. 16 in Appleton, WI.

UW Oshkosh competed against five other teams, including Lake Forest College (Ill.), which placed first at the meet, and Carroll University, which came in at second place.

Freshman Mariah Marowsky lead the Titans efforts with three first-place finishes, leading the school of swimmers in the 500-, 200- and 100-yard freestyle matches.

Junior Rebecca Birriel claimed first place in the 200-yard breaststroke with a time of 2:42.94, leading the second-place swimmer by nearly five seconds.

Sophomore Alyssa Hassel took a first-place finish in the 100-yard breaststroke with a time of 1:15.06.
For men’s swimming and diving, freshman Jack Miller and junior Matt Wilke led the Titans, each taking away two wins.

Miller won the 50-yard freestyle with a time of 22.32, beating two other Lake Forest swimmers by a fraction of a second. Miller also claimed first in the 100-yard butterfly race.

Wilke took first in both the one-meter dive and the three-meter dive, claiming his place as the meet’s leading diver.

Junior Jarrett Lieder won the 200-yard freestyle with a time of 1:48.76, gaining more precious points for the Titans.

The Titans have time to cool off before competing again, as their next meet will take place at the three-day Carthage College Classic in Kenosha on Dec. 5-7.