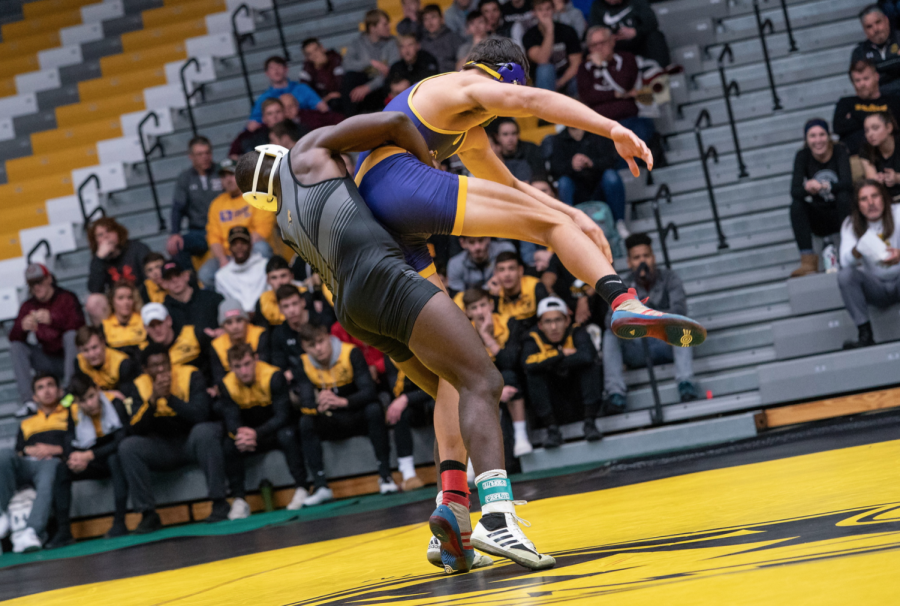 The UW Oshkosh wrestling team defeated previously unbeaten UW-Stevens Point on Nov. 21 in the Titans’ home opener 27-15 to claim their first dual win of the season.

The victory for the Titans (1-2) was the first conference meet of the season for both teams as the Pointers (5-1) suffered their first defeat, in part due to two forfeits.

The Titans were down three points after the first two contests as senior Nate Arquinego was defeated by way of a 5-3 decision to UWSP’s Brandon Peckham at 157 pounds in the first bout of the meet.

This deficit increased to eight as sophomore Muzi Sitshela was defeated by a 15-0 technical fall to UWSP’s Jordan Weinzetl at 165.

Sophomore Jordan Blanchard turned the tide at 174 pounds, scoring a pinfall over UWSP’s Austin Schrei in 1:09 to pull the Titans within two points.

Sophomore Bryce Herlache won his contest in its sixth overtime, defeating UWSP’s Austin Stebane by a 4-3 decision to remain undefeated on the season to that point. This gave the Titans a nine-to-eight lead, and the first Titan lead of the evening.

Senior Colten Cashmore, At 197 pounds, lost in triple overtime to UWSP’s Jerry Lipke in an 8-6 decision to give Stevens Point their second lead of the night.

The heavyweight bout pitted Ben Kitslaar against UWSP’s Noah Wieczorek, with Kitslaar gaining an 8-5 decision victory over Wieczorek to give back the Titans’ lead, which the team would hold for the rest of the evening.

UWSP would fail to suit up wrestlers at both 125 and 133 pounds, earning freshman Denis Murphy (125) and sophomore Matt Joyce (133) forfeit victories. These forfeits also guaranteed a Titan victory over the Pointers, as the Titans were up 24-11 with two matches remaining.

Sophomore AJ Schoenfuss would be defeated by a 9-1 major decision to UWSP’s Zane Strubler at 141 pounds before the night concluded with freshman Keagan Lazar defeating UWSP’s Mason Wheeler 9-2 in a major decision at 149 pounds.

Wrestling before Thanksgiving break concluded for the Titans after the team took two places at the Concordia University Wisconsin Open on Nov. 23, when Cashmore placed fifth at 197 pounds and Murphy won the consolation title at 125.

The nonscoring tournament had 15 programs represented, including WIAC conference opponents UWSP and UW-Whitewater.

Cashmore would rematch Lipke from earlier in the week for fifth place, and would supplant his loss with a 3-1 sudden victory to win the match. Cashmore compiled a 5-2 on his way to fifth place, claiming the most wins of any Titan during the tournament.

Murphy would go 4-1 on his way to defeating teammate freshman Luc Valdez by way of a 9-2 major decision for the consolation title at 125 pounds.

The Titans will compete next on Saturday, sending wrestlers to the UW-Parkside Open and the Milwaukee School of Engineering Invitational. UWO’s next dual meet will be at North Central College (Ill.) on Thursday, Dec. 12.