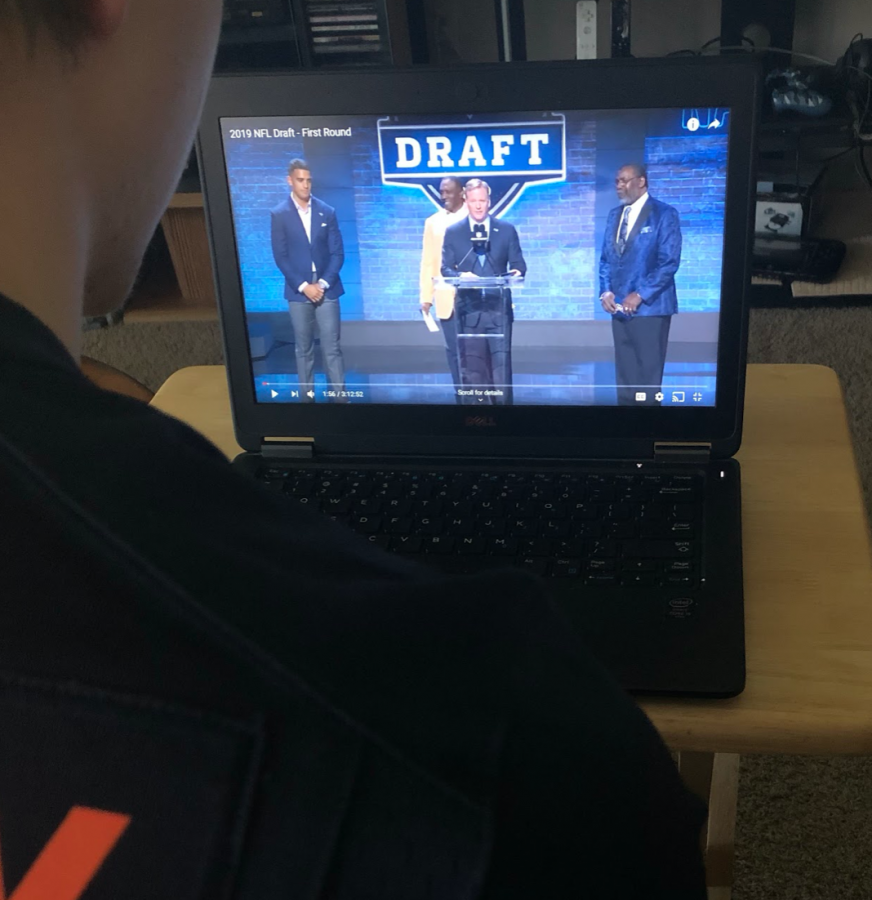 The NFL Draft will commence, as planned, from April 23-25. As it stands, the Cincinnati Bengals will have the first pick in the draft.

This year’s 2020 NFL draft was supposed to take place in Las Vegas. However, due to the rapid spread of the COVID-19 virus, the 2020 draft class will not be having their names called in the Las Vegas Raiders’ hometown; they will be watching NFL commissioner Roger Goodell announce each selection from his basement.

On April 6, Goodell made the announcement that the draft, which begins on the 23rd, will go virtual for the first time in NFL history.

This means that each player does not have the option to attend the draft in person, but there have been many picks in past years who have opted to experience the time with their families at home..

“They can celebrate their accomplishment of getting drafted at their house,” UW Oshkosh freshman and New England Patriots fan Tyrus Washington said. “It’s not as glamorous as walking across the stage and shaking Goodell’s hand, but they can be with family so there is some upside.”

As for the always interesting televised reactions that come from each fan base when each pick is announced, Goodell said there will be a montage of 15 people behind him who react to each selection in an effort to make up for the lack of an in-person audience.

“I think it’s an unnecessary step to try to make this seem more normal when obviously nothing about it is normal,” UW Oshkosh freshman and Arizona Cardinals fan Tanner Garbisch said.

On April 20, the NFL held a virtual mock draft for the purpose of acclimating each team’s executives to the technology. Numerous technological problems arose, including bandwidth issues and an inability to find the mute button on the part of some administrators.

Communication between executives also seemed to be an issue, and it very well could be during the real thing due to the fact that all executives and coaches have to practice social distancing and cannot ponder their decisions in the same room.

In hopes of troubleshooting some of the online hiccups that have come up with the modified Microsoft Teams application, each team has been granted one IT specialist in the pick decision-maker’s home.

To further compensate for the connectivity issues, the NFL announced it will not push anyone’s draft pick back if their time on the clock expires before a selection has gone through.

“Obviously there’s the foreseeable lagging and sound issues that happen in every large virtual display,” UW Oshkosh freshman and Green Bay Packers fan Anamay Del Real said. “A big part of the draft is the anticipation of who is on the clock and how much time is left. It builds suspense.”
Penalty or not, the likelihood of someone’s screen crashing or buffering in a video conference call of 32 people, as many students who are currently trudging through Blackboard Collaborate may relate to, is inevitable. Although there will be no repercussions for a team’s time expiring, there are other ways in which communication troubles can impact the draft process.

“I could see certain teams having trouble communicating with each other for trades,” Washington said. “I predict there will be a 40% drop in trades made during the draft this year.”

The league had been faced with the ultimatum of postponing the draft or finding a way to conform to the social distancing guidelines to have it on time, and on April 23 everyone will see how this historical decision unfolds.

“I think they are setting a good example to take precautions and do the draft digitally,” Del Real said. “It’s not ideal, but it is the safest option for the teams, players and fans.”