The ‘King’ of Oshkosh 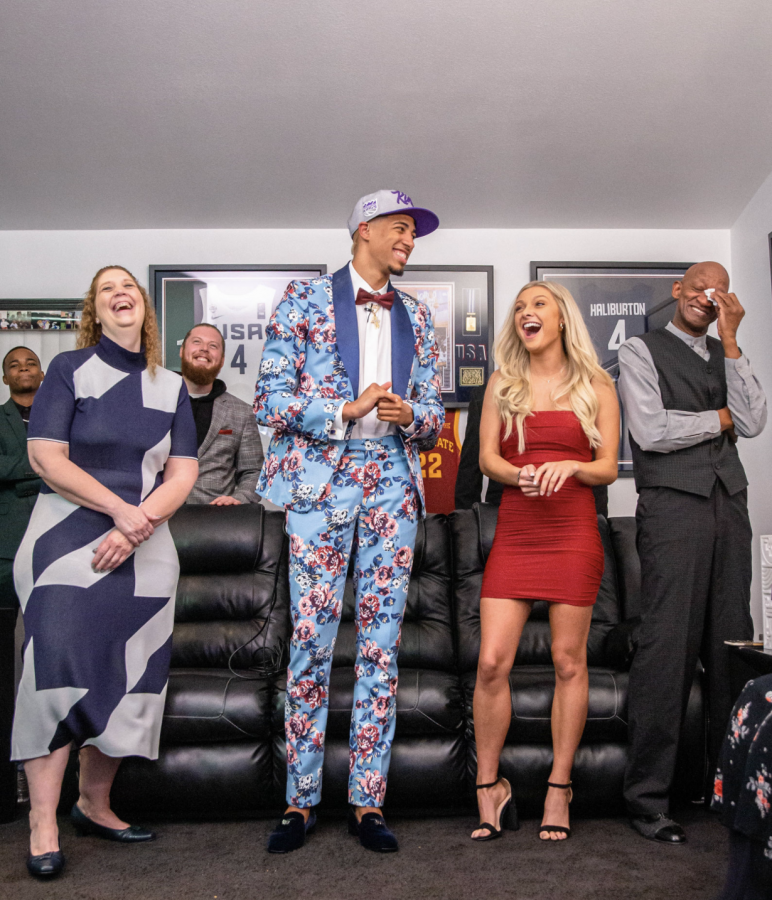 Out of the 7.8 billion people in the world, only 600 are able to say that they are on an episode roster before opening night of the regular season. Oshkosh native Tyrese Haliburton became one of those 600 when he was drafted 12th overall in the 2020 NBA Draft by the Sacramento Kings.

The number of NBA players will be cut down to 450 the night before the regular season, but judging b

y the Kings’ trust in Haliburton seeing that they picked him in the first round, it would take a lot for him to not make the team’s active roster.

Haliburton played basketball for Oshkosh North High School, and in his senior year he put up game averages of 22.9 points, 6.2 assists, 5.1 rebounds, 2.5 steals and 1.7 blocks. The Oshkosh native star had a high school career-high of 42 points against Kaukauna High School.

In his stellar senior year, Haliburton led the team to a 26-1 record.

Seen as a selfless player in high school, Haliburton received nothing but praise about his play from his high school coaching staff. His pass-first style of play at the point guard position stems all the way back to his days as a member of Oshkosh North.

The A-T attempted to contact Haliburton, but his agent stated that he is no longer doing local media interviews.

“Ty’s style is a direct representation of who he is as a teammate. Ty loves to share the ball and get his teammates involved,” Oshkosh North basketball head coach Brad Weber said. “He would always pass up his own shot if he had a teammate open.”

Following his senior year of high school, Haliburton attended and played basketball at the University of Iowa State. In his first year as an Iowa State Cyclone, Haliburton had game averages of 6.9 points, 3.6 assists, 3.4 rebounds, 1.5 steals and 0.9 blocks.

Haliburton’s biggest stand-out component is that he is an accomplished winner who hungrily pursues winning at a high level. His array of accomplishments and winner mentality really helped him stand out of the crowd, according to his high school coach.

“He is a winner. [He is a] state champ, Big 12 tournament champ, USA gold medalist [and] any team he has been on has won,” Weber said. “Ty made people, and teams, better. There is one stat that Ty cares about – the win. His desire to do what the team needs to do so they can win is what set him apart from a lot of other players.”

Haliburton’s most significant area of improvement is his ability to become an all-around scorer. The pass-first guard has worked relentless hours in the gym in order to achieve his play as a scoring threat.
This improvement, combined with his ability to read the floor and understand the game well, brought Haliburton’s game to the next level.

“His overall strength on the offensive end is the most notable improvement,” Weber said. “His vision, passing ability and IQ have always been there. He now has a more complete offensive game. I had a chance to work him out when he was home before the draft, and was impressed with how consistent he is with his shot off the move and midrange.”

When Haliburton’s name was called in the 12th spot of the 2020 NBA Draft by the Sacramento Kings, the moment brought nothing but happiness to the star point guard’s coach. He sees Haliburton as someone who has worked for everything that he has earned, and his coach is thrilled to watch his not-so-young-anymore pupil take the NBA by storm.

“I am so excited for Ty and the Haliburton family. They have gone about it the right way. He has spent countless hours honing his craft and searching to be a better version of himself,” Weber said.

In terms of how the 20-year-old will fit on a young Kings team that had 31 wins and 41 losses in 2020, Haliburton’s high school coach sees him complimenting their backcourt quite nicely in a Western Conference that has become significantly harder over the course of the last decade.

“He is going to fit in nicely. It is a young group that offers him a chance to earn playing time his first year. He will complement Fox and Hield in the backcourt,” Weber said. “Ty’s ability to play with the ball and off the ball will offer the Kings flexibility in their line-up and a greater ability to guard teams in the West who like to play a more guard oriented line up.”

From a high school showout in Oshkosh, Wisconsin, to a first round draft pick for the Sacramento Kings, Tyrese Haliburton is making it known that his purpose on the basketball court is to do whatever it takes to help the team that he is on win. Haliburton’s character, just as much as his play, will be a healthy mesh at the professional level with his new teammates, and his high school coach is thankful that the young guard’s selfless personality has not gone unnoticed.

“I love that the experts and analysts lead with his personality and character before they speak about his abilities and skill,” Weber said.