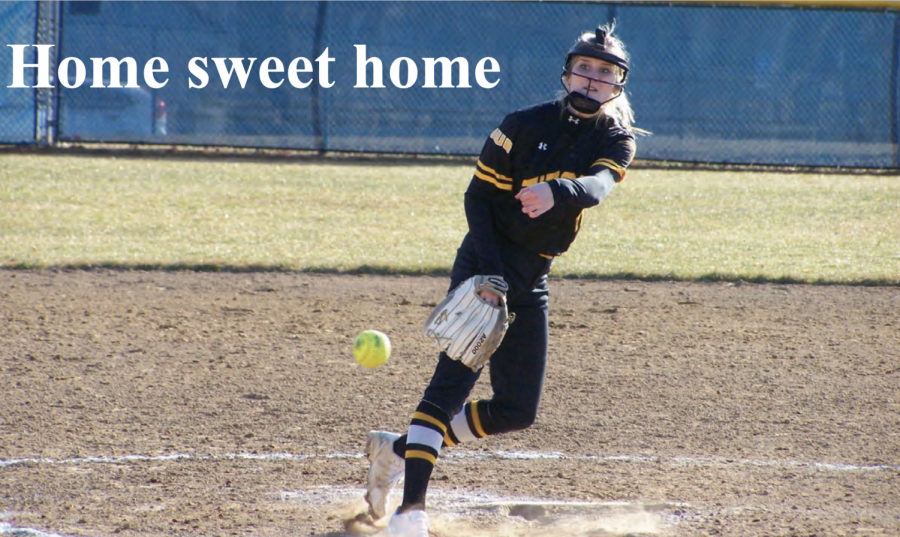 Courtesy of the UWO twitter page UWO currently leads the WIAC in sacrifice bunts with 20 just 18 games into their season. UWO is also second in the conference in team batting average (.329).

The UW Oshkosh women’s softball team came out on top in five of their six home games played in the past week by sweeping UW-Whitewater, splitting a two-game series with UW-Eau Claire and sweeping UW-Platteville.

UWO played UWW in a doubleheader on April 15, and the Titans won both games by scores of 5-4 and 9-4.

Sophomore pitcher Maddie Fink got the win in both games for the Titans. She pitched a complete game while allowing four earned runs, six hits and striking out five batters to grab the win in game one, and she slammed the door on the Warhawks in game two when she came in for relief and pitched two and two-thirds of an inning of shutout baseball. Fink only gave up two hits while striking out two in her second appearance.

Sophomore middle infielder Amanda McIlhany led the Titans on offense in the two-game series by going 2-for-6 at the plate with three runs batted in.

UWO then took on Eau Claire in a doubleheader on April 17, and they lost game one 6-2 before winning game two 11-9.

Fink started her second game in three competitions for game one, and she took the loss by pitching five innings and giving up five earned runs and nine hits.

Senior pitcher Claire Petrus came in for relief and pitched two innings of shutout ball, but the onslaught of offense by Eau Claire in the early innings was too much to overcome.

Game two of the series was an absolute shootout, with the 20 total runs scored being the second most in any UWO softball game this season.

Freshman pitcher Mia Crotty was the starting pitcher for UWO, and she pitched five innings and one third while giving up six earned runs, nine hits and striking out three.

Petrus got credit for the win by coming in and pitching two thirds of an inning without giving up any runs, and Fink slammed the door by shutting out UWEC in the seventh inning.

Freshman infielder Morgan Rau went 2-for-3 at the plate with four runs batted in and a run of her own to lead UWO’s offensive effort in the second game.

UWO then wrapped up their homestand the same way they started it, this time sweeping Platteville 3-2 in game one and 8-4 in game two of the April 20 doubleheader.

Crotty made the start in the next game, UWO’s final home competition for two weeks, and she made it count by pitching six innings and only allowing four runs on six hits while striking out one batter. Fink then came in and slammed the door with another shutout seventh inning.

Hannah Ritter went 6-for-8 from behind the plate against UWP with one run and four runs batted in to lead UWO on offense.

The Titans currently sit atop the Wisconsin Intercollegiate Athletic Conference (WIAC) softball standings with a 5-1 conference record and a 13-5 overall record.

UWO’s travels to UW-Stevens Point to play another pair of games on Thursday with first pitch times being at 2 p.m. and 4 p.m. and live results being available on the UWO athletics page.